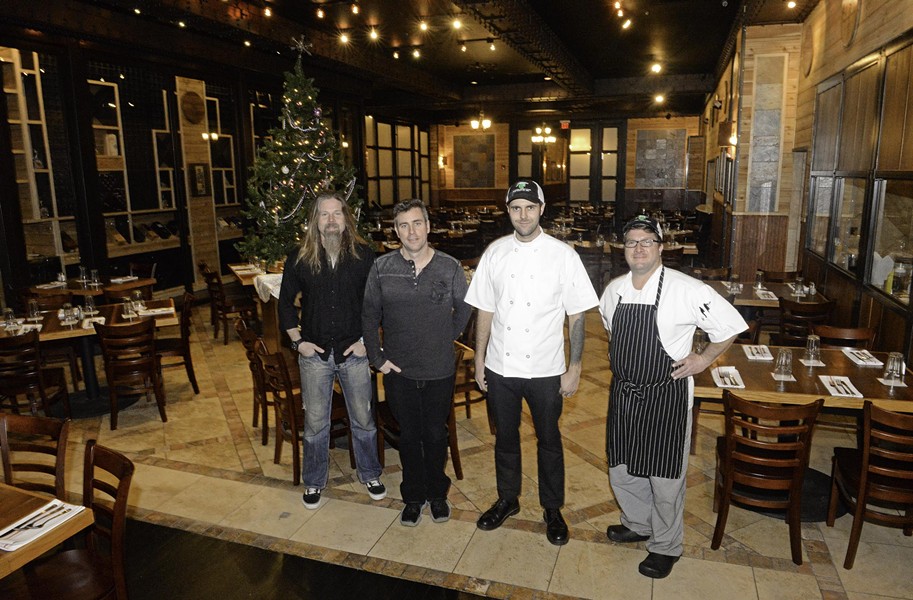 Wondering where former Aziza’s on Main and Six Burner chef Philip Denny ended up? For one hot minute, it looked like he was setting up the kitchen at Greenleaf’s Pool Room. Instead, you’ll find him behind the stove side-by-side with Dixie Chicken’s Todd Brady at McCormack’s Big Whisky Grill, which opened last week in the old Texas de Brazil spot at Regency Square. facebook.com/mccormackswhiskeygrill.

Bringing back the tacos: Andale Taco Chop Shop shut down a little more than two weeks ago to retool and opened back up Monday, Dec. 2. “The quality just wasn’t what we wanted it to be,” owner Michael Ng says. “We wanted to figure out how to do it better.” Search Andale on Facebook.

Brew news: Fugly sweaters want to be seen, especially around the holiday season. You can dig yours out and flaunt it at Center of the Universe Brewing’s Fugly Sweater Party on Dec. 6 from 4-8 p.m. Beer, food, music and a best (worst) sweater contest will benefit the Leukemia & Lymphoma Society. cotubrewing.com. … Also on Dec. 6, Hardywood Park Craft Brewing will release, in limited quantities, its Bourbon Gingerbread Stout. It’s the same gingerbread stout you know and love, only aged for 12 weeks in Virginia bourbon barrels to make it even more special. It’s available from 11 a.m. to 9 p.m., and there’s a two-bottle per person limit. hardywood.com.

Troubled waters: R&S Vending has filed a lawsuit against the owners of Haxall Point by F.W. Sullivan’s, saying they’ve defaulted on a $50,000 loan used to help open the Canal Walk restaurant. When contacted by Style two weeks ago, co-owner Jake Crocker said he hadn’t seen the suit, but that “It sounds like a frivolous lawsuit and it’s being taken care of.” The restaurant remains open for breakfast, lunch and special events.

Cupcake shopping: From Black Friday madness to Christmas Eve, holiday shoppers are looking for the best buy. In an effort to compete with big retailers, Carytown Cupckakes launched Eat, Shop, Drink Local this past weekend (which ends Thursday, Dec. 4). You can stop by the shop for cupcakes made with products from Blanchard’s Coffee, Blue Bee Cider, Hardywood Park Craft Brewery and First Colony Winery — and remember to give the local finds a glance when you’re out there hunting down presents. Check carytown-cupcakes.com for specific days and times.

Roller-skate celebration: Lamplighter Roasting Co. extended its hours to 10 p.m. at its Morris Street location on Sunday, Dec. 1. And starting in 2015, the company will double the size of its roasting production center. It’s celebrating the expansion and its five-year anniversary on Sunday, Dec. 14 with roller-skating and laser tag at Rollerdome on Williamsburg Road from 7-10 p.m. Tickets are $9, and include food and beer. A portion of the proceeds will go to RideRichmond. lamplightercoffee.com.

Green gift: Here’s a gift that will delight the receiver, help save the planet and benefit the Montpelier Foundation, which works to educate and preserve President James Madison’s home near Orange. Northern Virginia’s DuCard Vineyards, Virginia’s only solar-powered winery, is releasing a pair of wines for $100 for the holidays. Inside the engraved wooden box of the James and Dolley Madison wine set, you’ll find limited-edition bottles of Viognier and a blend of DuCard’s Cabernet Franc and Petit Verdot. ducardvineyards.com.