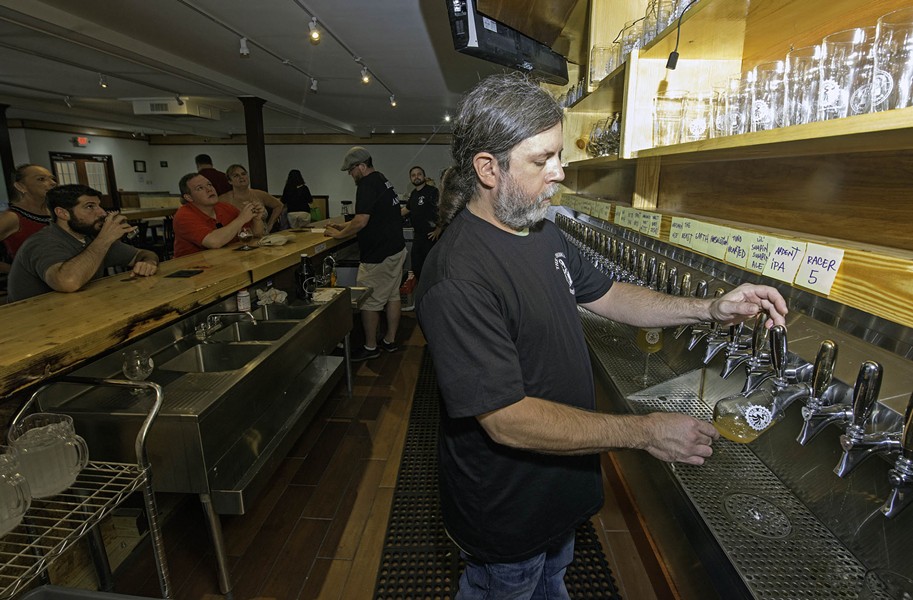 Scott Elmquist Bartender William Benn pours a Bear Republic Racer 5 IPA at the Answer, the new brewpub from Mekong owner An Bui. The bar can accommodate as many as 80 beers on tap.

One of Richmond's most anticipated openings has finally arrived. The new brew pub from Mekong and Commercial Taphouse owner An Bui, the Answer, opened its doors last Wednesday to give local media a peek at its renovated and clean-lined tap room. The spot on West Broad Street, next to Mekong, is nearly complete, with just a few more tweaks before the public can imbibe upwards of 80 brews on tap.

When will Brandon Tolbert, the Answer's brewer, start producing his own beer out of the new brewery located on-site? He isn't saying, nor is he disclosing his first Answer-exclusive beer. "A lot of people — a lot of people — are asking me," Tolbert says. "I have some ideas though. I really just want to get to the brewing."

The Answer Brewpub is at 6008 W. Broad St. The grand opening is scheduled for Sept. 2. — Robey Martin

The Chili Anniversary: Carytown institution Thai Diner Too will celebrate its 15th anniversary the week of Sept. 9. Diners will get a free desert with dinner, discounts on pad Thai and 15 percent off their meal on Sept. 9. The restaurant opened Sept. 9, 1999. Co-owner Mam Hongcharti says she traveled to a Buddhist temple in Houston, Texas, to ask for a monk's blessing for the new venture. She was told that the number nine was lucky for her in business, hence the opening date of 9-9-99. 3028 W. Cary St. 353-9514.

Dooley drinking: It isn't difficult to find local craft brew in Richmond these days, and beer lovers will find all the usual suspects in attendance at Maymont's annual Wine and Beer Classic on Sept. 12. So who's going to be there? Fourteen breweries, including Lickinghole Creek, Ardent Craft Ales and Isley Brewing. Some farther-flung Virginia neighbors also will be stopping by, including Lost Rhino Brewing (Ashburn), Smartmouth Brewing Co. (Norfolk) and Wild Wolf Brewing Co. (Nellysford). In addition to unlimited samples of beer, festival-goers can enjoy performances from local roots-rock act Jubeus, a corn hole tournament, and raffles for a home-brewing kit and other prizes. Gates open at 7 p.m. Tickets are $35 — $15 for designated drivers — at maymont.org. 1700 Hampton St., 358-7166.

Tubes and Taps: Attendees can help raise money for the James River Park System by spending a day floating in it. Crossroads Coffee and Ice Cream's second annual benefit includes transportation to and from the River, food, live music and brews on tap from Foothills and New Belgium. Sept. 14, 11:30 a.m., Crossroads Coffee and Ice Cream, Forest Hill. Tickets are $40. crossroadsrva.com.

10th Annual St. Benedict Oktoberfest: One of the largest Oktoberfest events in Virginia, with 50 craft beers and German and Austrian wine and food. Dancing, games, events and a children's area. Sept. 19, 20 and 21. Free. stbenedictoktoberfest.com.

Belmont Butchery's Beast Feast: Lots and lots of flame-roasted meat — though local produce and booze will be in attendance as well. Sept. 28, 1 p.m., benefitting Patrick Henry's Scotchtown in Beaverdam. Tickets are $80.