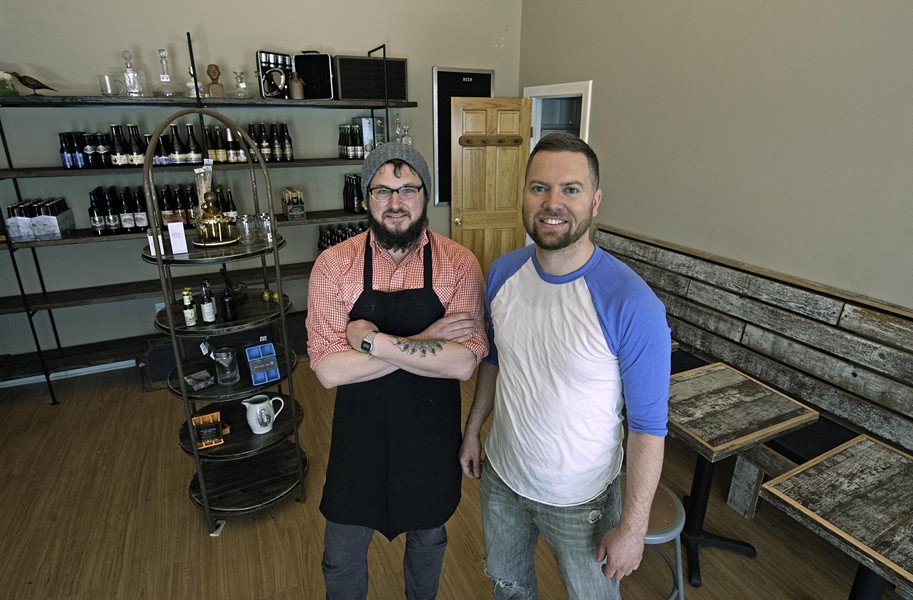 Scott Elmquist Chef Adam Hall and co-owner Jay Bayer of Saison open the market and cafe side of their business next week in Jackson Ward.

Jay Bayer is a driven man who acknowledges a fondness for whimsy. He's the force behind the growing food and beverage destination Saison in Jackson Ward.

Taking cues from other cities, Bayer, co-owner and chef Adam Hall and their team expect to open the market side of their business May 1, alongside their existing and acclaimed gastropub.

This expands their reach by offering breakfast, lunch and dinner sandwiches and small plates to take out or eat in, patio dining, growler filling, wine and beer, and unexpected bursts of whimsy such as peanut-chili pie with grape jelly ice cream. 23 W. Marshall St. 269-3689. Saisonrva.com.

Closed: The downtown restaurant 525 at the Berry Burk closed April 19. Its co-owner and general manager, Tom Haas, says business was good when events were happening at CenterStage, but other nights weren't strong enough to sustain the business. He says he hopes a more experienced operator will revive the business, which opened in June 2012 after a major renovation of the landmark building, which once housed a haberdashery. In the six months leading into its opening, Style Weekly went behind the scenes with the restaurant. You can read that story, "Into the Fire" from the archives at Styleweekly.com.

Coming to Carytown: Claudio Ragazzi brings his northern Italian sensibilities to a new project this spring, 10 Italian Cafe, at West Cary and Auburn streets. That's the former coffee shop with the big deck that's a prime people-watching destination. Ragazzi operates Caffespresso in the West End and will open 10 — his soccer-jersey number — with a similar menu of panini, cheeses and charcuterie, snacks and pastries. Live music, local art and an emphasis on international languages will add to the mix. Ragazzi promises low prices for wine, fair portions for food, and an easygoing atmosphere with flavors unique to the area. Outdoor coffee service begins soon, and the cafe will open in a few weeks when renovations are complete. caffespressocart.com.

Keg standings: Richmond ranks higher than Washington when it comes to the number of wine taps in use. That's a sign of how well a local business, Tap26, is doing getting keg taps for wine into restaurants and at events here and regionally. Now the company, under President Jon Lintvet, teams with Blue Bee Cider to introduce artisan ciders from May through September as part of the Virginia on Draft barrel program. Charred Ordinary is the first cider to roll out in the stainless steel, pressurized keg. Blue Bee is a premium artisan cidery and the first and only urban cidery in Virginia. bluebeecider.com. Tap26 Wines can be found on Facebook.

RVA victory: In a swanky evening of wine and dine at the Williamsburg Lodge on April 12, teams of chefs from Richmond, Williamsburg and Virginia Beach competed in an "Iron Chef"-inspired challenge held by the Williamsburg Area Restaurant Association. Chefs Todd Richardson of the Blue Goat, Andrew Haapala of the Country Club of Virginia and Matt Coleman of the Savory Grain took top prize, but the event was a reminder of the serious cooking talent from here to Tidewater and beyond.

Special appearance: Audra Chapman of Hourglass Winery in Napa Valley talks history and vineyards at a dinner at Wild Ginger on May 1. A five-course meal is paired with wines from the boutique vineyard for $100 per person. Space is limited to 24 guests. 3734 Winterfield Road. 378-4988. wildgingerva.com.

Graze on: One of spring's culinary highlights is Slow Food RVA's Graze food series, set for May 18 at Tuckahoe Plantation. Chefs Walter Bundy of Lemaire, Jason Alley of Pasture, Joe Sparatta of Heritage, DeAndre Wilson of Rappahannock and Craig Smith of Estilo will use rare and historic ingredients to create heirloom dishes. Guests will get tasting-size portions and can sample wine and craft beer. A limited number of house tours will show Tuckahoe, the home of Sue and Tad Thompson, where Thomas Jefferson lived as a boy. Music, vendors and family activities are part of the lineup. Slow Food RVA seeks to build meaningful connections among our past, food and the people who produce it. It's one of 225 national chapters in an international group. Tickets are $35 for food and alcohol tastings, $15 for food tastings only, $5 for ages 12 and older and children younger than 12 free. Details at grazeattuckahoe.weebly.com.