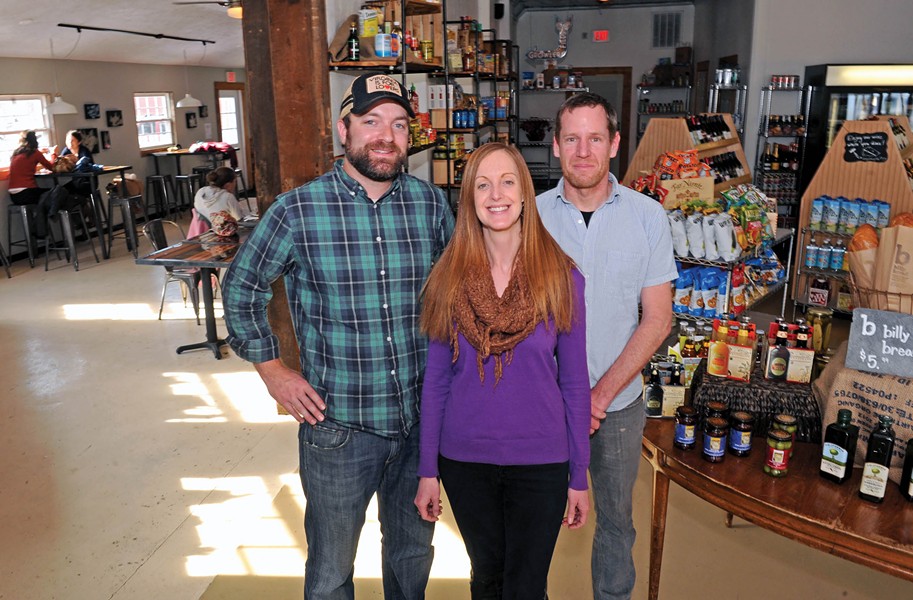 Scott Elmquist Hunter Robertson, Gillian Field and Shawn Tunstall opened Union Market in Church Hill in late January. A casual dining room and a retail spot for local foods and spirits give it a dual identity that’s resonating with the neighborhood.

Specialty grocers are popping open in three of Richmond’s most food-savvy neighborhoods — Church Hill, Jackson Ward and the Fan. Here are some highlights:

Union Market: Because its three owners live in the neighborhood, Church Hill’s newest market is designed to meet specific needs and respond to customer requests. Shawn Tunstall, Gillian Field and Hunter Robertson, along with spouses and friends, gave the former Johnson’s Southern Comfort a complete redesign, putting market shelves on one side and dining tables on the other. Lighter colors and simpler styling reflect the merchandise, natural foods, an ample selection of wines and beers, and “a high quality product at a reasonable price,” as Field puts it. The mix includes Pizza Tonight pie kits, Bombolini pasta, Homestead Creamery ice cream — which is selling as fast as it can be stocked, despite the weather — and other local foods.

The food side “is easy and casual,” Field says — “not a bar scene, but we do have eight beers on tap,” with hard cider, kombucha and growlers for filling. Sandwiches ($7-$8.50) include prosciutto and fig with fontina on Billy bread, pimento cheese with bacon, or grilled zucchini and portobello, caramelized onion and artichoke with house-made horseradish mustard. Two soups ($4.75 a bowl), salads and specials rotate, with vegetarian and vegan options and some gluten-free choices. The lineup is evolving as customers express their desires, Field says.

Harvest Grocery & Supply: Owner Hunter Hopcroft opened this Fan District market in late January and “traffic has been steady,” he says, as customers check out the Olli wild boar salami, Polyface Farm meats, Sausagecraft and Hardywood products, and other local foods and beverages. Hopcroft says he started the business to be “a good neighborhood market for the Fan, carrying items from the perimeter of the grocery store in a compact format.” It’s a concept he’s seen in New York and Los Angeles that updates the midcentury markets, where fresh and local foods prevailed.

Urban Farmhouse: The third link in this local chain owned by Kathleen Richardson is up and running in Church Hill. Soups, salads and sandwiches are served in a casual dine-in area. An upscale selection of natural foods, wine and beer, produce and household goods is oriented toward quick pickups for nearby residents. A fourth, larger location is scheduled for Scott’s Addition later this year. 310 N. 33rd St., in the Lava Lofts building, 222-4700. theurbanfarmhouse.net.

Saison: Construction is complete but the timetable is delayed for the expansion of Saison in Jackson Ward. Owner Jay Bayer says he expects the market to be ready for customers by early March, with beer, wine, cocktail items, groceries and local foods. Lamplighter coffee will be a featured element, and lunch hours will be added. Saison also plans to open on Mondays for dinner because of patrons’ requests. 23 W. Marshall St., 269-3689. saisonrva.com.

Branching Out: No sooner did Josh and Jessica Bufford win an Elby from Richmond magazine for best new restaurant, Estilo, than they announced their third venture in a dizzying 18 months. They’ll take over the space at 900 W. Franklin St., formerly Cous Cous and the Well, bringing a slightly different version of their gastropub Toast in the Village shopping center.

“As great as the University of Richmond has been to us there, we’ve had a lot of people asking us to bring the concept downtown,” Jessica Bufford says. “We won’t be a college bar, we’re not booking music, we’re definitely different” than the predecessors.

After making decorative changes, they expect the space to be ready for business by March. The wild card, of course, is that their other businesses are located in Henrico County and this one is Richmond, so timing could be more difficult to predict. toastrva.com.

Feed even more: Zest Fest returns to the Greater Richmond Convention Center on Feb. 22, from 6-10 p.m. The annual event benefits hunger relief programs at FeedMore, and involves 16 chefs, eight Virginia wineries and four local craft breweries, along with an auction and live music. Tickets are $150 per person and can be purchased online at feedmore.org.

Birthday pie: Cousin Vinny’s Pizza at 11800 Hull St. celebrates its first year in business by offering a free pizza to customers who stop in, 4 p.m. until midnight, on Feb. 10. No call-ahead or delivery orders are accepted for this event, but on other nights the take-out business runs later than most with hours until 3 a.m. and 4 a.m. 744-4777. cousinvinnyspizza.com.