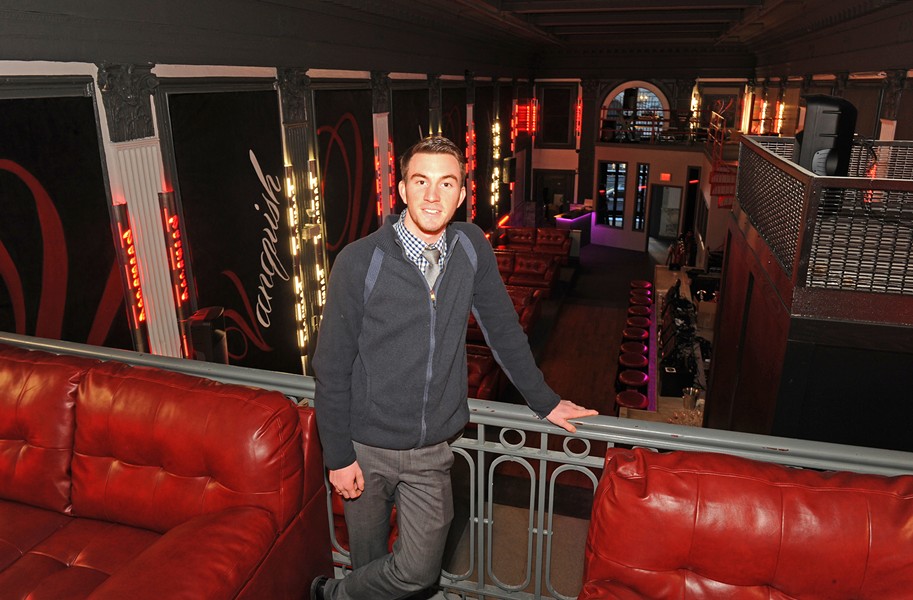 Scott Elmquist Manager George Grandis Copeland shows off the view from the mezzanine at the downtown club Vanquish, which opens this weekend.

Clubs still tend to self-segregate in Richmond, but a new downtown business hopes to break down some social barriers and draw a diverse and sophisticated crowd.

Vanquish, named for the quarter-million-dollar Aston Martin sports car, is set in a former bank, once the clubs Bank and Bliss, now filled with red leather couches for mingling near the bar, a plush mezzanine, a cigar and hookah room and private party space downstairs. A red metal dancer cage below deck was covered on a recent soft opening, said, perhaps in jest, to be in deference to a possible visit by the mayor.

As openings go, this one was different, with live music, introductions from a raised DJ platform, and a prayer for the club's staff. Owners James Washington, Edgar Rosales and Shiloh Jones welcomed a fashionable crowd, and chef Kyle Midgett served lamb chops, local oysters and pork belly crostini.

"When you see this menu, it is so different," Rosales says. Instead of a bar, "we want to call it a restaurant with ingredients that are indigenous to the state — clam chowder, meats and cheeses, city-hotel-style food," including a daily prime rib buffet with salads, sides and desserts.

Vanquish will cater to the college crowd once a week, Washington says, with a club level lounge. But it will hire no promoters and instead program acts itself for the 500-capacity club — "reaching out to everyone," Washington adds, with dressy attire requested and VIP service available. A dance floor, stage for comedy and music, and two DJ booths are part of the black, gray and red-hued renovation the owners began in October.

After Amour Wine Bistro was hit with a small but destructive kitchen fire this month, the real pain set in. Owner Paul Heitz says dealing with insurance issues is worse than the fire itself, but he's directing positive energy to a series of events at neighboring Carytown establishments while reconstruction continues.

"After a disaster, what a positive way to look up and collaborate with other businesses," Heitz says. "The Carytown Merchants Association immediately responded and helped me, as well as many neighbors. What a great network in Richmond."

A Valentine's dinner is being planned, along with a midwinter wine dinner at Mezzanine with chefs Todd Johnson and Amour's Rob Hamlin, and a wine dinner at Curry Craft with chef Mel Oza and Hamlin. Also in February, a couples' wine and lingerie event takes place at Fiamour boutique in Carytown. See amourwinebistro.com for details on these and other events prior to a grand reopening when the building is ready at 3129 W. Cary St.

Sublime subterranean: Let's start at the end, with cinnamon rolls three ways, coming to a beer dinner Feb. 9 at Ipanema Cafe. Chef Will Wienckowski pairs his creative vegetarian dishes with five Virginia beers for the cafe's birthday event, which begins at 6:30 p.m. Tickets are $50, including tax and tip, and reservations are taken in-person or by phone at 213-0190. Besides dessert, the meal includes a roasted root vegetable salad, soup with saffron dumplings, cauliflower flan and shepherd's pie with mushrooms and colcannon. Breweries are Devils Backbone, Lickinghole Creek, Strangeways, Hardywood and Apocalypse Ale. 917 W. Grace St. ipanemaveg.com.

Winning: Church Hill restaurant the Roosevelt and its chef Lee Gregory took top honors at the third annual Elby awards Sunday at the Virginia Museum of Fine Arts. Other winners in the Richmond magazine production included David Rohrer of WPA Bakery, Gary York of Enoteca Sogno for its wine program, Garnett's Café as a reader-chosen neighborhood favorite, Estilo Una Mesa Latina as best new restaurant, the spirits program at Dutch & Co. and its chef Philip Perrow a rising culinary star, the service team at Lemaire in the Jefferson Hotel, house manager Michele Jones at Pasture downtown, and Travis Croxton of Rappahannock as restaurateur of the year.

Ammo and camo: Chef Walter Bundy of Lemaire at the Jefferson Hotel is featured in an eight-page spread in the February and March issue of Garden & Gun magazine. Bundy's hunting and game-cooking prowess is depicted, and his recipes for duck, venison and oysters affirm the chef's belief that game, respectfully treated, is used to its fullest potential as "no better food in the world. It's unadulterated, untouched and as natural as it comes."

Editor's note: A previous version of this story listed a different opening date for Vanquish. The club will open Saturday, Feb. 8.