Cristina’s Cart is making fans out on Hull Street. Plus, RVA Beer Week and more. 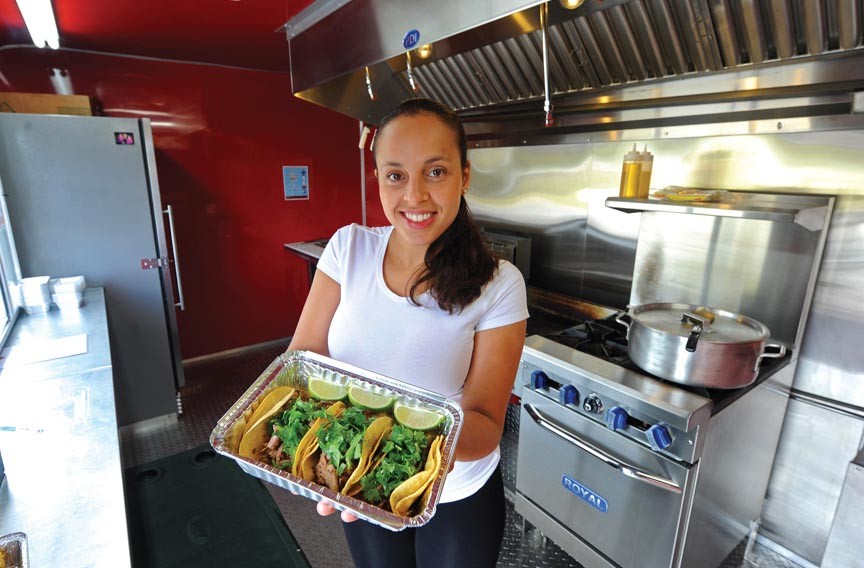 It turns out one of the city’s best food trucks isn’t in the city at all, but out Hull Street Road in Midlothian. Open since August, Cristina’s Cart is the custom commissary-on-wheels of Cristina Kaiser, a 27-year-old who’s rapidly growing a fan base for succulent and meaty parking-lot lunches.

She serves flat pressed sandwiches, carnitas tacos, chicken and ground beef empanadas, jibarito sliders, and the dish of pernil — roasted pork — and Spanish rice or plantains. Everything’s cooked to order in the red and stainless steel kitchen trailer, which was fabricated in Miami. With two fryers, a steam table, flat griddle, full range and oven, refrigerator, hood and four sinks, it’s a sparkling departure from some of the area’s less-equipped and often road-worn food conveyances.

“I knew what I wanted, and I cook what I want to cook,” Kaiser says. “And the thing I love about it is the people, seeing their expressions, seeing them come back.”

Her family recipes, tweaked from her father’s restaurant collection, “have a Caribbean flavor, very different from Mexican food,” Kaiser says. Using cilantro, peppers, onions, garlic, achiote oil, yucca and slow-roasted meats, she offers “flavorful, but not spicy” food and a signature hot sauce, yomemato, which she’s planning to bottle. Specials such as chicken fricassee and winter soups add variety, and she expects to remain open year-round.

Suds city: RVA Beer Week is Nov. 1-10, which is more than a week, but the calendar’s packed with ways to celebrate the rise of hops here. With 10 local breweries, a recent tripling of draft beer lines devoted to craft brews in local restaurants, and a steady increase in beer sales, knowledge and interest, Richmond is positioned as a beer capital of the region. Beeristoric, a tour led by historians, is Nov. 10, and makes seven stops at local breweries and watering holes. Tickets are $45 and sold at Center of the Universe and Strangeways breweries. A detailed schedule of events is online at tastethelocal.com.

Friends of food: A five-course tasting menu at Heritage celebrates the release of “Maximum Flavor: Recipes That Will Change the Way You Cook” from Aki Kamozawa and Alex Talbot of Ideas in Food. Talbot joins his longtime friend chef Joe Sparatta on Nov. 11 for the dinner, which also features chef Lee Gregory and bartender T. Leggett, both of the Roosevelt. Tickets are $75 and include a signed copy of the book. Reserve at 353-4060. 1627 W. Main St. heritagerva.com.

NOW CLOSED: Moshi Moshi closed over the weekend in Carytown. Chef Kevin LaCivita will open Pomegranate in the space at 3321 W. Cary St. this winter.