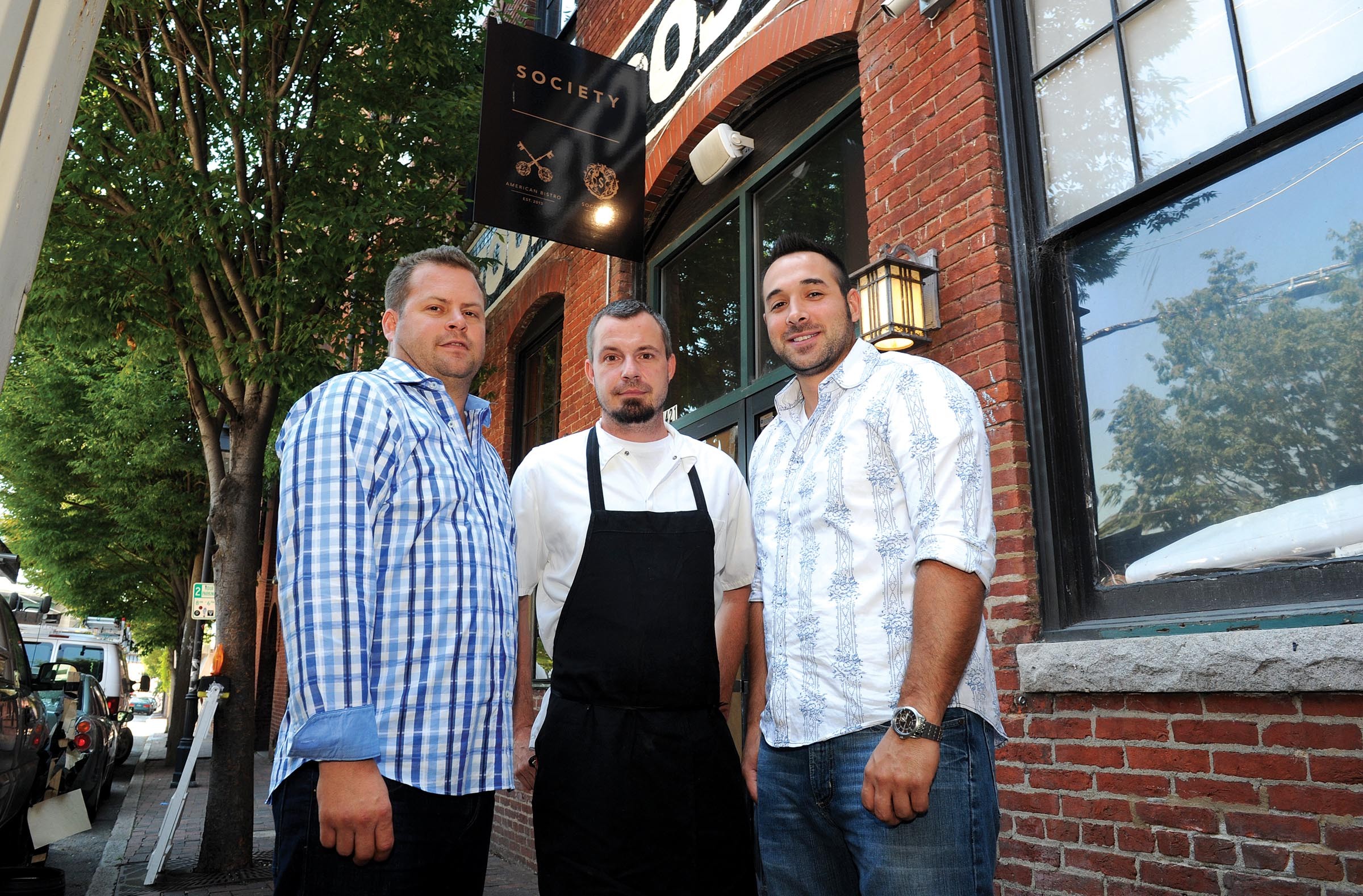 When the reboot of Lucky Buddha, Society opens in Shockoe this week, its triple phase shift starts with power lunches and ends with barmaids wearing custom corsets. In-between is dinner in medium to massive portions with moderately priced wines.

After 9 p.m., the American bistro gives way to Society Social Club, redressed with lighting and house lounge music from co-owner and DJ Matt Busch. If the corsets are a distraction, plaid shirts and vests cover the bar males, servers wear black dresses, and cocktails include the Gatsby lemonade with Ketel One, thyme and muddled strawberry. Guests who order VIP treatment are promised full attention, co-owner David Bess says. "The staff is really what makes your establishment," he says, and table hosts will be waiting with drinks upon arrival.

Society is "expanding what is offered downtown," Bess says. "It's definitely going to have a wow factor, where you can walk away having an experience." The interior design by Helen Reed uses purple and metallic tones. Its 125 seats are mostly at banquettes, with 20 at the bar.

Of the menu items from executive chef Justin Cropper and sous chef Ian Merryman, the stunner is a 40-ounce Tomahawk rib-eye with patatas bravas (Spanish potatoes) and cider-braised collards for $49. Other dishes range from $14-$29, with chicken thighs on fontina polenta, tuna with lavender and fennel, sea bass with couscous and squash salad and 12 ounces of pork belly over white cheddar grits. Weekday lunches — mostly deli sandwiches and burgers — come in "huge portions that will be our selling point," says restaurant director Chris Sollom, whose title indicates the group's intention to expand this prototype into other Virginia cities.

Next door at sibling bar Cha Cha's Cantina, a menu switch and redecoration are about to begin, but a name change has been nixed. The Cha Cha's identity locked in after regular visits from Washington Redskins players, who showed up solo and in groups throughout their local stay this month. Bess hopes to see them again next year and was pleased that other customers "didn't bombard them" but were glad to hang nearby.

Eat this now: Flavor of the week is the smoked bacon chocolate pie with caramel ice cream at Benny's BBQ. The business is celebrating its 20th year and worlking with a neighbor in the Stony Point Shopping Center, Gelati Celesti, for this dessert combo. Benny's owner Richard Cacciotti says moving from Stratford Hills to its new location two years ago took a toll on business, but that his support of local products and people hasn't wavered. "We still have the best all naturally smoked barbecue hand-chopped to order in front of the customers, our delicious homemade sauces, side dishes and desserts and best of all a warm, home-style atmosphere," he says, which includes longtime servers. Cacciotti is attempting to "bring back some fun to Bon Air instead of customers having to go downtown" for a local show, he says. Jazz band Rumble Fest Revival is booked for an Oct. 4 return after a full house at its recent appearance. 3044 Stony Point Road. 320-7447. bennysbbqva.com.

Coming soon: The Pig and Pearl, a "pork-forward" restaurant from Washington-based chef Rich Gunter, is filling the Republic spot at 2053 W. Broad St. Its Facebook page defines the independent concept as "a modern Southern-influenced bistro featuring an oyster bar and a domestic whiskey bar operated by rogue and seasoned veterans passionate about barbecue and excited about the idea of using domestic products." Pig pickings, oyster roasts and fish fries are on the agenda, and hiring is in progress.

From reader OneWayRichmond: "Parkside Cafe was in Reedy Creek (Woodland Heights) not Westover Hills you dingbat."

At Acacia Mid-Town, the "fin de soiree" evening bar food promotion does not include special pricing on beverages. Style's error resulted in some "unfortunate customer service issues," according to a staff member, and is regrettable.

Water Grill has a new name, Water Coastal Kitchen, to resolve a trademark problem with a business in Los Angeles. It's at 3411 W. Cary St. 353-3411. watercoastalkitchen.com.

Decorative Middle Eastern hideaway the Phoenician at 4401 W. Broad St. is closed and will become an Italian restaurant, Al Dente, from the same owner, Naji Kadi. It's expected to open this fall.

Johnson's Southern Comfort closed last week in Church Hill. Renovation of the building, a former coffeehouse, lasted far longer than the restaurant's run. A new tenant is being sought for the space at 2306 Jefferson Ave.