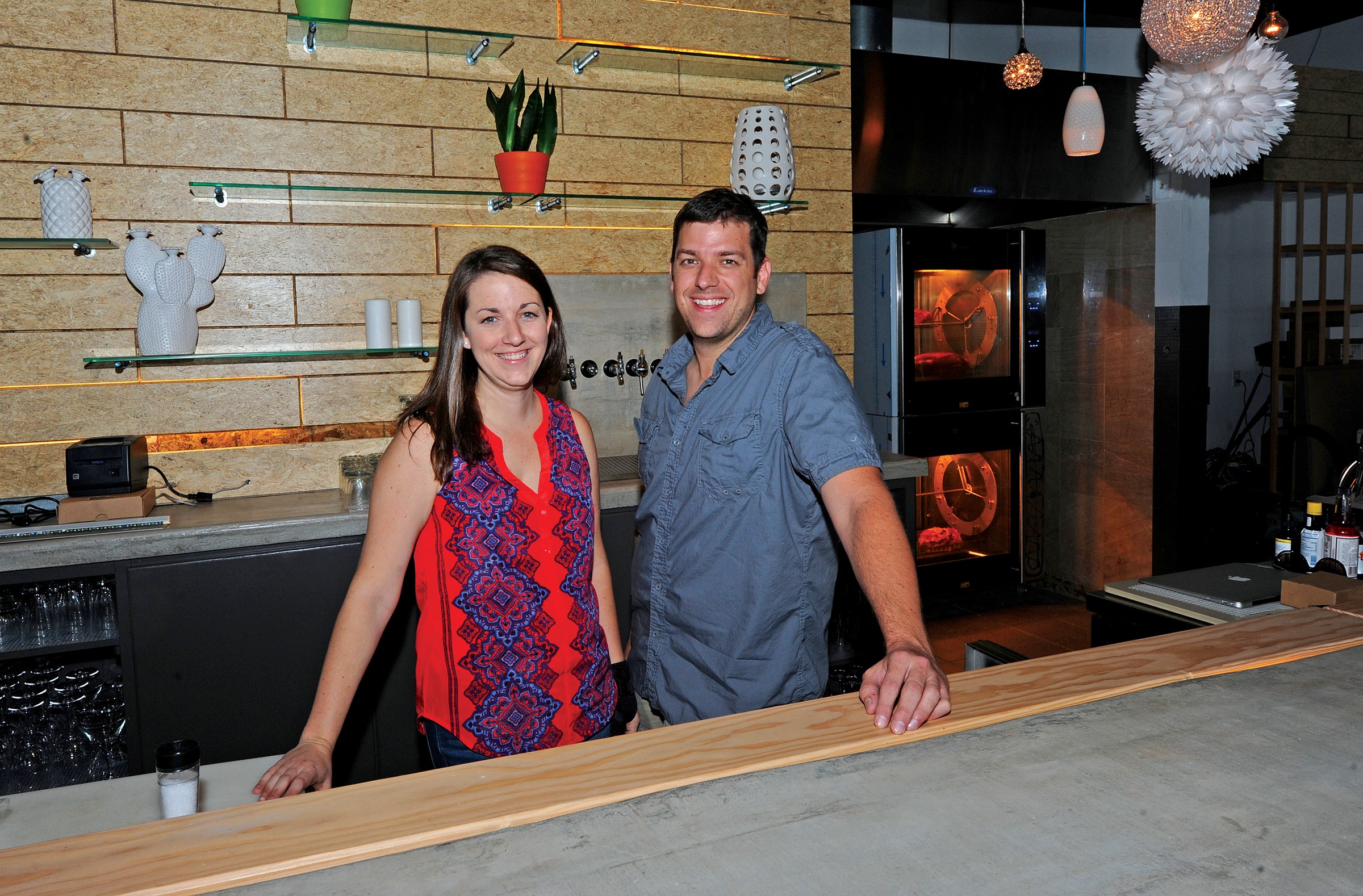 The setting is a knockout with a soft punch. Estilo, the just-opened South American restaurant in the Village Shopping Center, combines a personal journey and a ripe cuisine, and makes a dramatic entrance into that neighborhood’s dining scene this week. Owners Jessica and Josh Bufford, self-acknowledged theater kids who met while doing the play “Crazy for You,” know how to stage a scene and please people. They’re doing it nightly with Toast, the 1-year-old gastropub a few doors down in the same shopping center.

Estilo is a sophisticated sibling with sparkling light effects, authentic, Latin-American flavors, and a staff that understands hospitality. Jessica Bufford has promoted some of Toast’s top staffers: Bar manager Dominic Prudente moves up to general manager at Estilo, and sous chef Craig Smith moves up and over. His menu presents foods the Buffords savored while traveling recently in Peru, Mexico and Puerto Rico. Street food includes sopes (griddled corn cakes), picadillo (stuffed calamari), chifrijo (pork with salsa and beans) and a dozen more. New Norwegian rotisserie units will spin duck, chicken, pork and beef, with room for vegetables and fish and a changing array of possibilities.

Other dishes include mofungo (mashed plantains with spices and seafood), duck confit pozole, a stew with a signature duck-skin garnish, and quinoa, seafood, salads and seasonal entrees. “We adore this food,” Josh Bufford says, “and we found that the things that were colorful there were the flowers and the food.” They’ll use white plates to show it off, and a beverage list to complement it — including a rarity at the bar, more taps for wine than beer. Bottles are all from the Southern Hemisphere, mostly less than $30, and a cocktail list mixes classics and originals.

A poured-concrete bar is the focal point at the business, which has a roomy, booth-filled interior, side patio, seating for 150 and universal access. Joseph DeLeon was lead carpenter for the project, fresh off work at En Su Boca and Toast, and transformed the previous tenant, Bocca Toscano, into an airy eye-catcher enhanced by mosaics, mirrors and artwork.

Estilo serves dinner nightly and will add lunch hours after Labor Day. “We like being reliable and being open,” Jessica Bufford says of the schedule, hoping to appeal to neighbors, faculty at University of Richmond, and professionals looking for something different. 7021 Three Chopt Road. estilorichmond.com.

Staff up: Brian Munford, owner of now-closed Parkside Café in Westover Hills, is new general manager at Wild Ginger in Chesterfield County. In other Eat Restaurant Partners news, a new restaurant project in the Fan is about to be finalized; details are being kept quiet for now. Chef Frank Norton’s new menu at the Blue Goat brings yet more burgers, sandwiches and pizzas to Westhampton, on a block rife with American food homogeneity. The Goat’s former Euro-influenced chef, Kevin LaCivita, is preparing to open his own space elsewhere.

Closed: Eat by Pescados China Street has closed, and the partnership between owners Todd Manley and Bob Windsor has dissolved, with each focusing on his respective venture at Pescados in Midlothian and Boo’s Brown Bag in the Fan. The Oregon Hill business, one of the city’s emerging seafood hot spots when it opened three years ago, re-branded last year with mixed success. It’s for sale or lease.

Also in transition, the former Peacock’s Pantry is available at 1731 W. Main St. after a series of short-lived occupants. And a new plan is in the works at the former Republic at 2053 W. Broad St., which closed earlier this year.

Sub Rosa update: After some delays, construction has begun at Sub Rosa Wood-fired Bakery in Church Hill, which was damaged by fire earlier this year. Owner Evrim Dogu says the earliest reopening date for the popular new business will be October. Crowd-sourcing and benefits helped the owners and building tenants land on their feet.