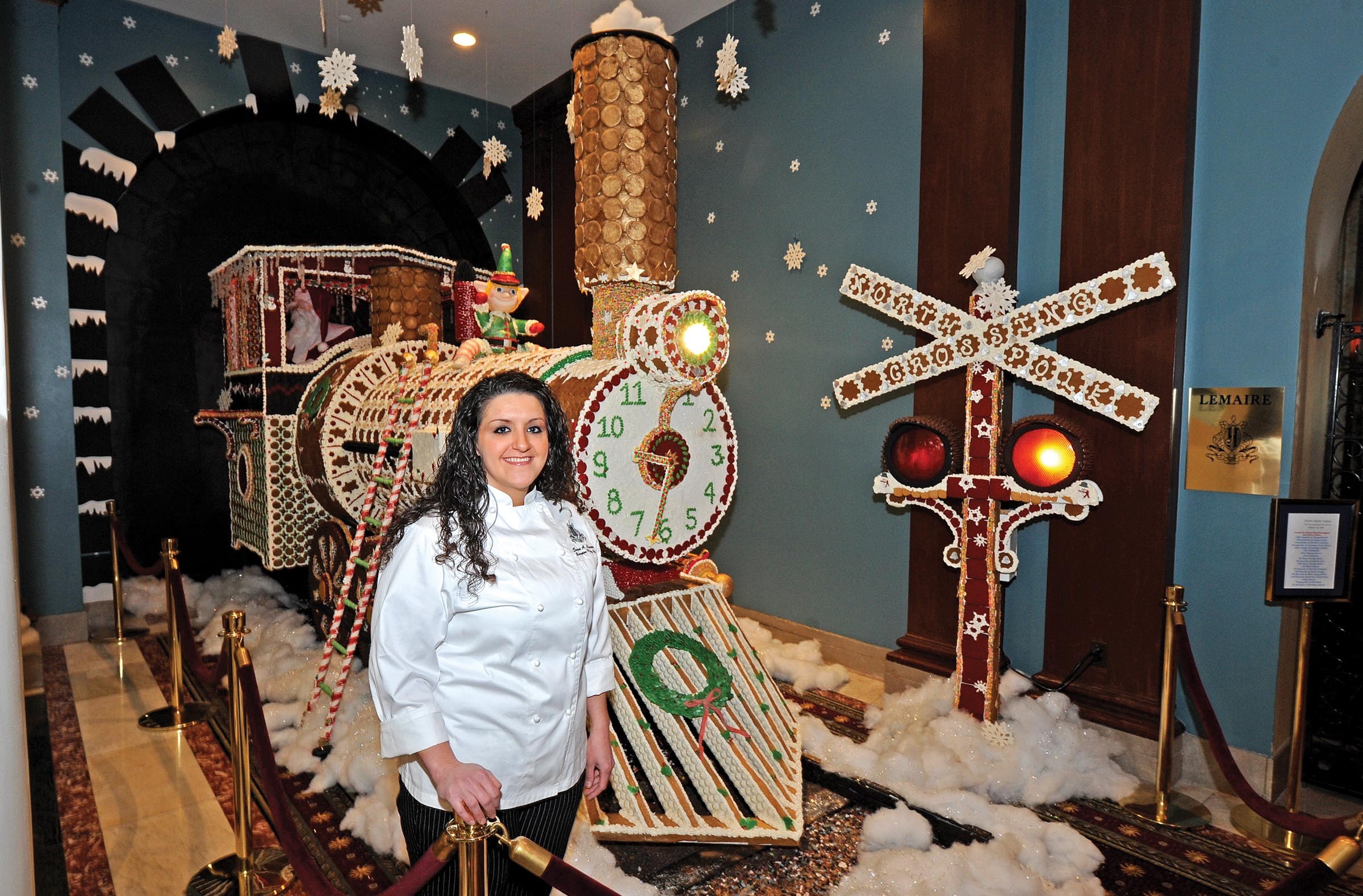 It's not really edible, and it weighs a ton, literally, but for wunderkind pastry chef Sara Ayyash the point of the gingerbread train at the Jefferson Hotel isn't taste, but memories. "When I step back and look at it," she says of the holiday spectacle, "I think what I would have said as a kid — more glitter, more candy — so I continue to add more until I reach my wow factor."

The steam engine on display in the hotel lobby departs from the usual gingerbread houses, and its cylindrical shape caused a construction challenge that took three weeks to finesse into art. Working in absurdly contortionist poses to apply pans of hot gingerbread around the wooden frame, Ayyash and assistant Katie Liddiard got a few burns among the laughs. Then they stirred royal icing to the consistency of mortar for "an intense week of gluing candies," Ayyash says. The result is on display until the end of the year.

Once visitors have whetted their visual appetite, they can find Ayyah's desserts nearby — apple spice cake with mulled cider sorbet at Lemaire, and ginger spice bread pudding with cream cheese custard and marshmallow ice cream at TJs. The 24-year-old Ayyash has some impressive pastry credentials, with the Townhouse and Blackberry Farm her first gigs after culinary school. This is her third holiday structure for the hotel. And does the chef prefer savory snacks when she's finished baking? "I can eat a bag of jelly beans any day," she says.

Blowtoad closes: Less than 10 months after opening, chef Jimmy Sneed's coal-fired pizza pub shut its doors last week in Carytown. Persistent rumors of its demise kept staffers on edge, and some customers complained about the chef berating his kitchen crew well within earshot of tables. Blowtoad did some things right — its promotions with the Byrd Theater, sourcing of Edwards and Sons meats, a late-night pizza window, delivery and an ample selection of craft beers were well received. Loved less were the giant plastic signs on the patio railings and the swinging balls that made their way onto pizzas and TV news. Sneed is considering his next move.

Bite back: In Goochland, Nadolski's Butcher Shop reopened Dec. 6 after a three-week fiscal cliff that forced it to suspend operations. Now, with a plan for vertical integration in place, the specialty butcher and gourmet shop has added a sister corporation to raise livestock specifically for the business. Sustainable, local meats and other products will be sold daily through the holidays, with prepared meals offered Tuesdays through Thursdays, at 2913 River Road West near the courthouse. 556-4888. Nadolskisbutchershop.com.

Light dining: A local tradition combines dinner and a light show when Lewis Ginter Botanical Garden opens its tea house for holiday dinner from 5 p.m. to 8 p.m. through Jan. 1, although it's closed Christmas Eve and Christmas Day. It is part of the GardenFest of Lights outdoor display, and separate admission is required. The menu features chicken in champagne and artichoke sauce, vegan pumpkin curry, pork chops, crab cakes, salmon and sticky toffee pudding and pumpkin praline cheesecake, with children's choices available and a final dessert hour beginning at 8 p.m. Reservations are recommended at 262-9887, ext. 329. Lewisginter.org.

More room: Just in time for holiday bookings, the space that was River City Cellars in Carytown has shifted function and is now an event and private party space. The Room at Secco is calling customers to action with descriptions such as "stylish and secluded" and the wine bar's trademark humor. See details at seccowinebar.com.