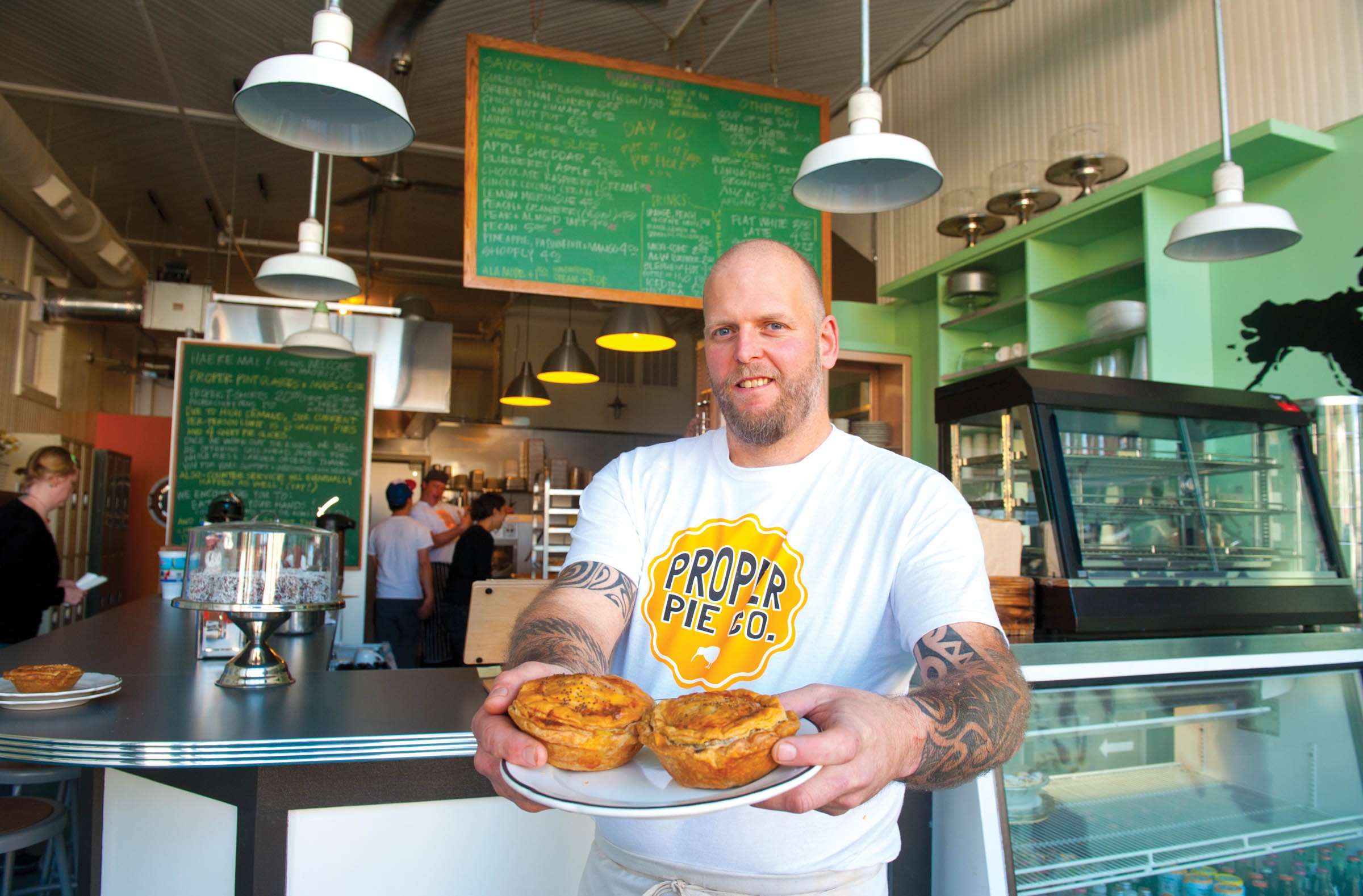 Richmonders are at their best when standing in line for takeout and socializing across otherwise wider divides. Lately they've been chatting, salivating and figuring out the chalkboard menu in a new kitchen that's lusty with smells, accents and ink, queuing up to purchase the trendiest food in town.

The instant embrace of Proper Pie Co. last month set off a bit of panic. Chef Neil Smith says he and co-owner, Nikki Price, were caught so off-guard by the long lines Nov. 14 from hour one that they had to regroup to find a way to muscle through a lot more dough. They pounded out a thousand pies in the first three days and added staff far beyond the "simple pie and coffee shop we had planned," Smith says, pleased but exhausted by the longer hours required.

Big sellers are the chicken, beef and vegan pies with various savory fillings, $5-$6, and slices of fruit pie for $4.50, or the deliriously chocolate Afghan cookies Smith grew up eating, a steal at $2. Natural butter or vegan shortening, unbleached flour and "lots of love" go into the dough that holds the portable meals together. International travelers and ex-pats have been the happiest to see their favorite snack making its debut in Church Hill. "We had 12 New Zealanders and some South Africans in here right away," Smith says, and a batch of them already are regulars. Proper Pie Co. serves Wednesday-Sunday, noon until 6, with seating at the window and a few tables in the cozy storefront. 2505 E. Broad St.

Ironfish partnership: Manuel Micheo has joined the team at Ironfish by Pescados in the far West End. As former owner of Spanish Imports, Micheo deals in wines, olive oils and other products, and will oversee business operations at the restaurant. Chef Jon Watts, whose résumé includes Spago and chef Wolfgang Puck and a stint at Pescados, is running a winter menu with braised short ribs and lamb shank, Southern vegetables and desserts, with daily fish specialties. Local craft beer is a focus and party space is being readied for the season. 3061 Lauderdale Drive. 249-4515 ironfishrva.com.

Bust goes bust: How many jokes will the Chapter 11 filing of local Hooters franchisee Cornett Hospitality inspire? For those who dreamed up the pantyhose-with-polyester uniform for servers, and the puny come-ons aimed in one basic direction, some will feel no sorrow. For others who view a trip to Hooters as a rite of passage or an escape from reality, they'll be relieved to know that the three Richmond locations remain open.

New in the Fan: Mediterranean Bistro is serving moderately priced Greek and Italian fare in a renovated corner cafe. The owners are a longtime food industry family. 2301 W. Main St. 901-8650.