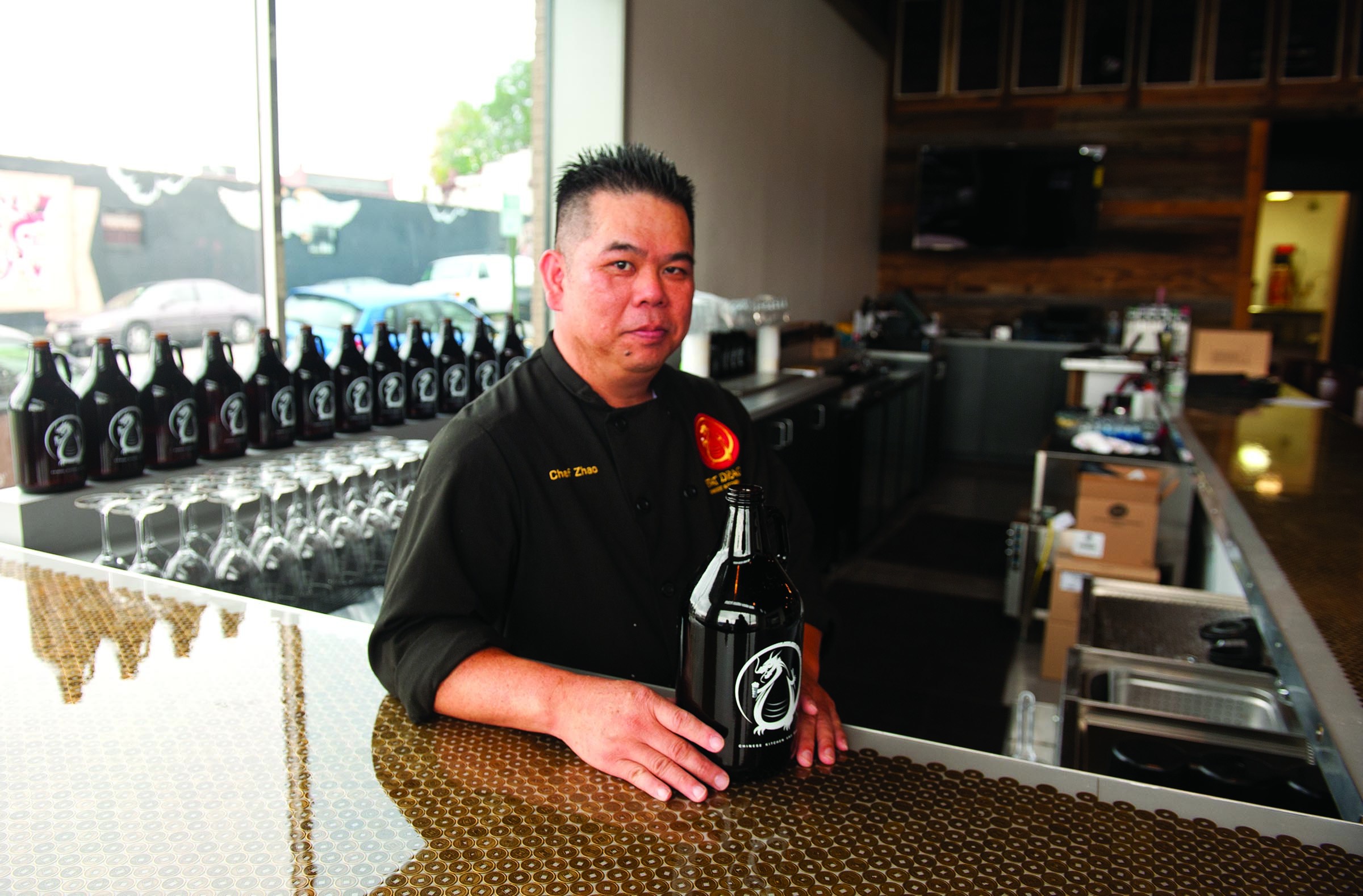 There are many focal points at the Fat Dragon, a Cantonese restaurant about to open on the Boulevard, but one of the sweetest is the affable, Mandarin-speaking chef Jin Zhao, nicknamed Fei (pronounced Fay). He's already a fixture in the kitchen, experimenting with recipes at the former Stronghill Dining Co., where the handcrafted woodwork has returned to its owners and an entirely new concept and aesthetic are nearing completion.

Witness the walnut communal table crafted by Joe Konopka of Homegrown Woodworks from a tree that fell at Willow Oaks Country Club, and the reclaimed barn siding, Moroccan-style lanterns, wallpapered lounge and walnut drink rail. A long bar, embedded with some 20,000 Chinese lucky coins, dominates the big corner window — not far from where the Redskins summer training grounds and a bunch of new apartments are in progress.

It's the fourth restaurant in four years from owner Chris Tsui of Eat Restaurant Partners and operations director Ren Mefford, who appear to be happiest at this stage of a project, putting the pieces together and generating the first round of buzz. Just as it did at the Blue Goat in Westhampton, Tsui's design sense kicks in with handcrafted metal and woods, a mix of table heights and styles, and a large-scale art piece still to be revealed. Tiffany Jeremiah and Les Stinson are assisting with décor in the building, which started as a Mack truck dealership in 1928 and later held a yacht company.

Mefford says Fat Dragon will serve all local products, without chemicals or monosodium glutamate. He notes that the kitchen has no freezer — a rarity in Chinese restaurants. The newest Kolpak tap system is primed for two dozen craft beers. Tickets for opening night will be given away in a public drawing, a gesture of egalitarian welcome that fits the owners' intentions for this casual, moderately priced gathering place.

While Tsui tastes a noodle and mushroom dish that Fei's proposing, he nods in appreciation of its fennel and coriander seasonings and fresh-rolled dough. Tsui's finger on the pulse of Richmond dining seems to be lucky even without the deep-set coins in this newest of his bars. Look for old-school neon signs to go up soon, announcing Fat Dragon Chinese Kitchen and Bar at 1200 N. Boulevard. 354-9888. fatdragonrva.com.

Teahouse in trees: A new fall menu is in effect at Lewis Ginter Botanical Garden's picturesque teahouse. Other local spots announcing their autumn flavor shift include Chez Foushee, a downtown treasure, and Carver's Magpie, where Owen Lane's amuse-bouche are a chef's salvo into cooler nights.

Chef out: Aaron Hoskins has announced his separation from the kitchen at 2113 because of "creative differences" and a management shift to a more casual menu at the Shockoe Bottom club. Hoskins left the Empress earlier this year for similar reasons. That Broad Street cafe later closed.

Branching out: A big player in the local barbecue circuit has opened a new location with another on the way in Midlothian. Tuffy Stone's Q Barbeque is serving at 11871 W. Broad St. in the Corner at Short Pump shopping center. The 130-seat space has heated outdoor tables and serves award-winning brisket, ribs, smoked meats and Southern sides daily from 11 a.m.-9 p.m. qbarbeque.com.

Bring it: BlowToad now delivers pizza and beer within a two-mile radius of Carytown. The restaurant's full menu and 100-item beer list are available for free delivery, although beer must be dropped off before midnight. A couple of recent pizza specials at BlowToad are worth noting: jerk chicken with green apples and mozzarella, and prime rib with bacon and cheddar. Beer choices change weekly and are celebrated with "kick the keg" festivities at the bar or the new red-topped tables. 355-8623. 2907 W. Cary St. blowtoad.com.