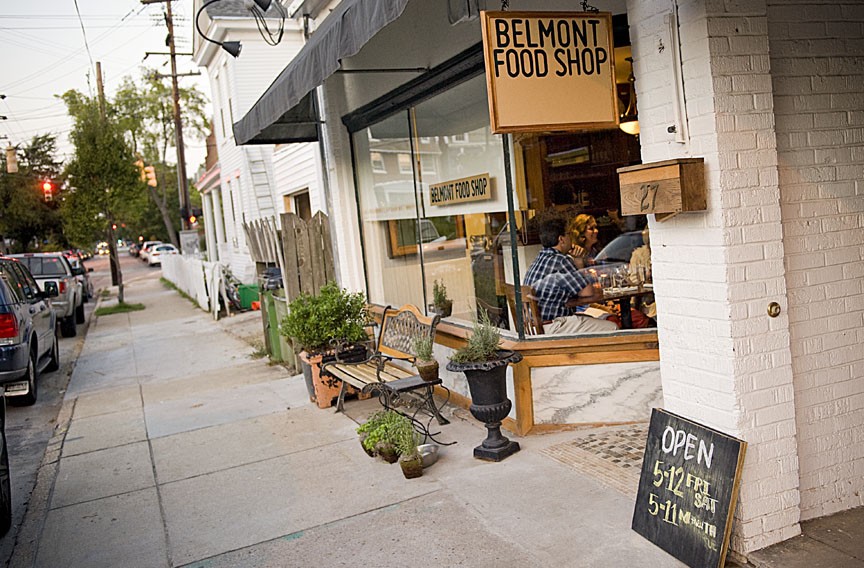 Along the way to opening a restaurant, chef Mike Yavorsky lost a business partner, spent two years wrangling with the city over parking and zoning, and crept along with a boxed-lunch business until he was allowed to serve seated guests. Now he's at the stove of Belmont Food Shop, a five-table speak-easy in a Museum District storefront that opened Sept. 7.

The 1920s building has vintage fixtures and furnishings from Chicago and elsewhere. "We tried to create a place that could have existed on Belmont" in that era, Yavorsky says, "with the same feel and back-to-basics approach." The speak-easy serves new American cuisine in a casual format with a handful of entrees and appetizers on a chalkboard menu, along with wine, beer and cocktails at a small bar.

Goat-cheese ravioli, baked rockfish with eggplant, a crab and avocado appetizer in red pepper sauce and short ribs with spoon bread are the most-ordered dishes so far. Pricing is $8 for appetizers, $20 for entrees and $6 for desserts; diners can choose one of each for $28 and add $8 for short pours of three accompanying wines. "It's a way to try different foods with wine pairings that is a very good deal for $36," Yavorsky says. "Because we're small we say, 'Let's push ourselves a little more.'" That's why Yavorsky makes his own cola and other items for the 22-seat business. Catering for the office lunch crowd keeps the kitchen busy in the off-hours and has sustained the long-delayed start.

Fantasy island: Now that chef Todd Manley has assembled a kitchen staff and menu at Eat Oregon Hill, he's off to another big adventure while running his three local restaurants from afar. He's just become an owner and partner at the Beach Side Café in St. Croix, an open-air dining spot next to Sand Castle on the Beach, a boutique hotel in Frederiksted. Manley says it's an opportunity he couldn't refuse. His revamped cafe opens in mid-October, with the beach-loving Manley at the helm and other chefs turning the slightest shade of green.

Road trip: Just in time for the Urbanna Oyster Festival (Nov. 2-3), a new restaurant, Ostra Urbanna, is open. The raw bar and grill has a full menu of steaks, sandwiches and desserts as well as shellfish and other seafood. 250 Virginia St., Urbanna. www.ostraurbanna.com.

Sign of the times: Even the Livewire Lemonade couldn't save Bill's Barbecue, which tried adding cocktails at a few locations to boost business over the past 18 months. On Sunday, the local chain ended its 82-year run by closing the last three of its stores.