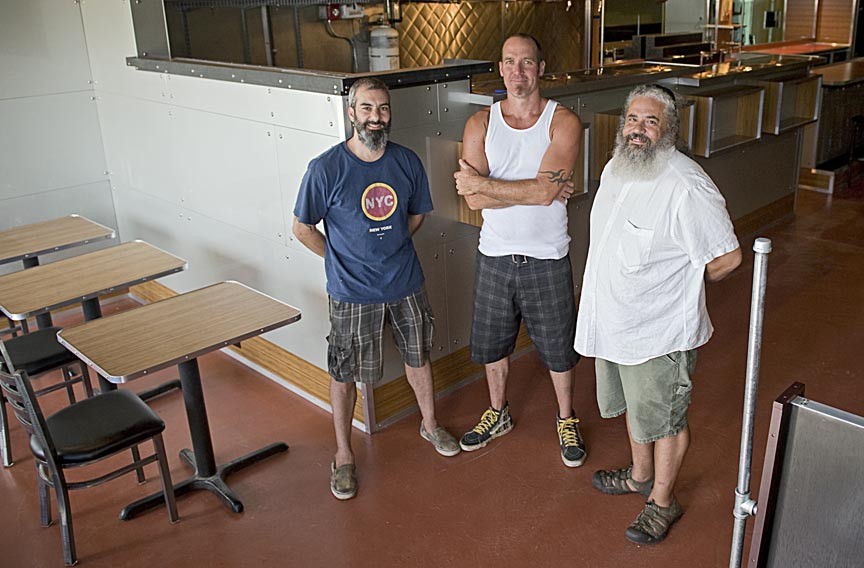 For many diners, atmosphere is right up there with food and service as a reason to eat out. One of Richmond's busiest atmosphere-makers is Jeff Killian, a designer and carpenter getting noticed for his work at Stella's and the Continental. His newest project is Galley, a casual neighborhood bar and diner owned by Chris DiLauro and Manny Mendez in the former Stratford Grill space at 2805 Hathaway Road.

Killian has installed booths and tables, a decorative metal wall near the window, and an updated but familiar-feeling interior in the once smoke-stained, 50-plus-year-old space. "He's done an absolutely fantastic job," DiLauro says of Killian's finesse, and "he does the whole thing, from design to the build out, really well."

No opening date is set, although artwork is up, the menu is in final-tweak stage, and the bar is poised to get its taps once permits are in place. Both owners are still busy with their first-born businesses — DiLauro cooking soft shells, veal and rockfish at 13-year-old Bacchus, and Mendez at the stove at 14-year-old Kuba Kuba, both in the Fan. As for the South Side's Galley, "we're coming right along," DiLauro says, unfazed by the rash of new restaurants in Richmond. "I think it's great," he says, because competition raises the standard for everyone.

In the rarified world of food comedy, two locals are making their mark in video — and perhaps hoping for a springboard to stardom. Karri Peifer, editor at Richmond.com, has taken her self-deprecating act to Amuse and other venues and is part of a state tourism video on local attractions. "Food is naturally fun, and it's ripe for skewering," she says, and "I like taking my ignorance and harnessing it for other people's amusement." A cooking competition video series with local chefs debuts on the site this month, although "it needs to be understood that I can't boil water," Peifer says.

Also making the rounds is Matt Brehony, who works the front of house at Secco Wine Bar and in his spare time makes comedy shorts with Mondial Creative Labs. Send-ups of a Guy Fieri-like television host and a desperate sub-shop owner are drawing attention to Brehony's blog, lifeinsandwichform.wordpress.com.

When he isn't dreaming up comic sketches, Brehony, who worked "the high-end, super-trendy NYC restaurant scene" for mega-owner Jeffrey Chodorow for a few years, has plans for his own place. He's securing financing for a small American pub to be called Knotty Pine, with a rustic-chic interior and an extensive beer list. "Nothing high-concept," he says, "but hopefully hitting all the marks."

Plastic donuts: Because the city won't allow a larger sign at Dixie Donuts, a string of inflatable pink pastries wafting in the breeze is the newest visibility ploy for this Carytown shop. Open Tuesday-Sunday at 2901 W. Cary St. 359-1119.

China calling: Chef Ellie Basch, who reviews restaurants for Style and writes the column An Educated Guest for Style Weekly's monthly Belle magazine, has won a scholarship to study Chinese cuisine next month. The Barbara Tropp Memorial Internship offers professionals a cultural exchange and kitchen time with Beijing chefs. Basch praises WCR Richmond, a branch of Women Chefs & Restaurateurs, for offering culinary opportunities such as this one.

Gig is up: Richmond's summer of food-television notoriety is over, with no top prizes but some decent exposure. Chef Gordon Ramsay fired "Hell's Kitchen" competitor Clemenza Caserta after Italian night, giving the Stuzzi co-owner fifth place and a memorable turn as an oft-bleeped and sweat-soaked competitor whom Ramsay loved to bait. Chef Malcolm Mitchell didn't get his own series on "The Next Food Network Star," but got lifelong advice from mentor Bobby Flay; he still hopes to open a restaurant here. And the Black Sheep's battleship CSS Virginia didn't claim the title of Adam Richman's best sandwich in America but gained more affection for the business, which is a film and television crew favorite.