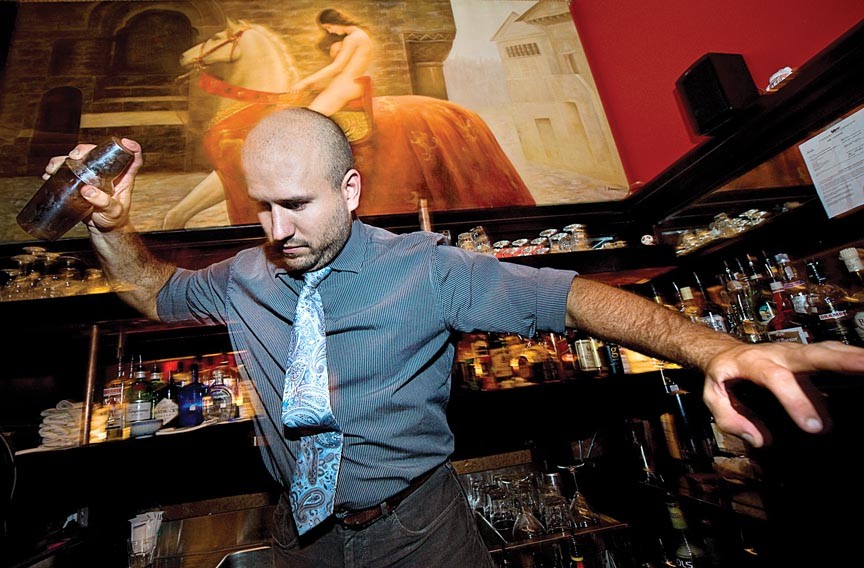 Bartender Bobby Kruger has moved around a lot in the last year, from Julep's New Southern Cuisine to the Fanhouse and most recently to Bistro 27 on West Broad Street, where he took over as beverage director in the spring. The foam has barely settled, but Kruger's heading out of the area code and into New York. A local bartender since 2005, Kruger made a name for himself with his craft cocktails and handmade ingredients, and recently landed the best mixologist title in Style Weekly's Best of Richmond readers' choice survey. We threw a few questions his way while he manned a busy bar during a Friday night dinner rush at Bistro 27.

Style: Where are you headed?

Kruger: I'm going to New York to work in a bar called Back Forty West. It's located in SoHo. … It's a farm-to-table-style restaurant up there. Heavy focus on the beverage program. And I'm going up to basically take over the cocktail side of the program, and I'm going to be the bartender as well.

How did you find out about it?

They actually contacted me. They were interested in importing some new talent, and I have the Richmond connection down here. So actually part of the plan is … to basically bring up Richmond-based products too, and try to introduce them in their bar. So I'll be bringing in a lot of the Serrano ham, actually the Humdinger Ginger Ale from Church Hill. … This will be for their restaurant, but I will actually use it. We've got a martini we're going to do with ham-stuffed olives.

That's a long answer. Just kind of to get out and be somewhere where there's a lot more competition. I mean, not to say there's not competition down here, but it feels like everywhere I go the burden is on me to pack the house and bring in as many people as possible. Where I'd rather go somewhere where the emphasis is on me making great cocktails, and hopefully they can provide the clientele — that's New York, it's busy enough.

What are you going to miss about the Richmond bar scene?

The beer. And of course all the friends I've made. But for us … we have more beer here than they do. We're really a beer hub. It's a fantastic thing for the city.

What do you hope to get out of this?

More experience, really. Just more advanced education, kind of be in more of a hub. Be able to walk out the door and go in any direction really and go to a phenomenal restaurant that serves world-class products. There's a lot of stuff that we don't get to serve down here because of the way that the ABC controls everything. This way I can go up and I can play around with some stuff that I just don't have access to down here.

And you'll be splitting time for a little while?

I'm going to be doing the back-and-forth thing for about three months. I'm probably going to continue to do some guest bartending down here. I just won't be working while I'm down here, I'll be able to play a little bit more. S

Starting next month, local drink slingers will show off their skills, ham it up with the crowd and work to prove why they deserve $1,000 in the annual bartending competition held by Cha Cha's Cantina at 1419 E. Cary St. Weekly showdowns happen Mondays at 9 p.m. — July 9 and July 16, leading to the finals July 23. Competitors can sign up by calling 726-6296.