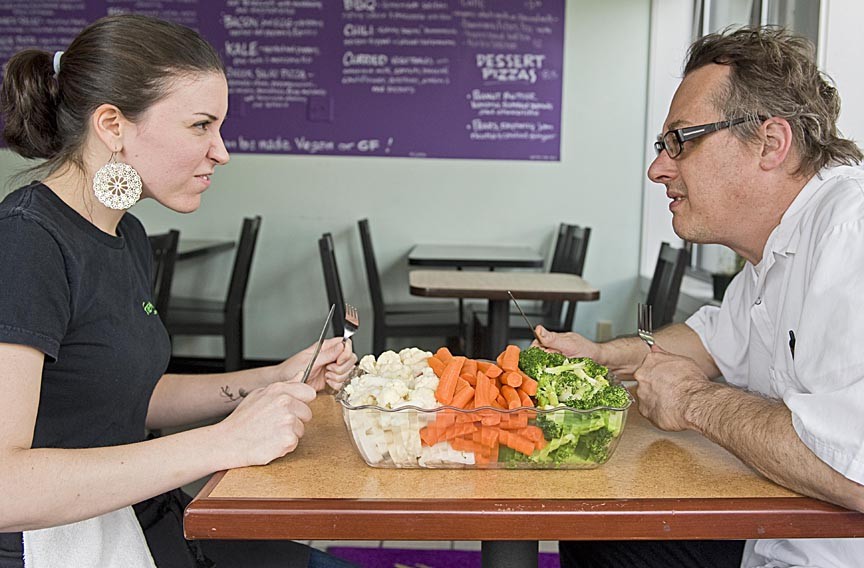 The ingredients will be a mystery, but none of them will have faces. The competitors, however, are well known to those who follow local chefs with a passion for fresh produce and inventive combinations. Jenna Sneed of Fresca on Addison, Greg Johnson of Citizen and Jen Mindell of Rooster Cart are set to compete in a vegan "Iron Chef" challenge at the Richmond Vegetarian Festival this weekend.

The cook-off is a highlight among a diverse array of vendors, live music (Moosa, Rattlemouth, Miramar, Hotel X and Thompson and Blake) and community building in an atmosphere that welcomes kids, dogs on leashes and people of all culinary stripes. The free event is June 23, noon-6 p.m., in the azalea gardens at Bryan Park, with a rain date of June 30. Festival goers are asked to bring a can of vegetables for Lamb's Basket, an emergency food pantry in Lakeside; donations to Tricycle Gardens are encouraged online at veggiefest.org.

Stronghill changes hands: A spokeswoman for Eat Restaurant Partners confirms recent reports that they hope to close by the end of June on the purchase of this restaurant at 1200 N. Boulevard. The group, which owns Osaka Sushi and Steak's two locations along with Wild Ginger and the Blue Goat, is keeping quiet about plans. But partner Ren Mefford is on a research mission in Southern cities, if that's a clue to the next chapter. Stay tuned for details.

Sensi Italian Chophouse: A former staffer of this Shockoe Bottom restaurant reports getting a severance email that the place was closing within hours. Sensi's listing on Open Table has been removed and its lights are off. Famed Sichuan chef Peter Chang had considered the property for a downtown expansion, and other owners have been looking at the space during the past year.

Shockoe Bottom update: A new, lighted sign is up at the Luncheonette, 104 N. 18th St., and interior changes are nearly finished. But owners say they won't open the Brooklyn-style diner until August when students are back. When it's ready, late-night eats will be a feature on weekends, with classic breakfast, lunch and dinner (hot dogs, burgers, sandwiches) during the week. Look for celebrity photos on the walls, retro bar stools and pink neon in the small space that once was home to Zuppa and Bistro 104.

Oyster saloon fires up: Among the fraternity of local chefs and purveyors, the owners of Rappahannock River Oysters are particularly well-regarded. Now cousins Ryan and Travis Croxton are joining the downtown food renaissance by leasing the former Louisiana Flair spot at 322 E. Grace St. for Merroir RVA, an oyster saloon with raw bar, craft beer, cocktails and small-plate delicacies that change with the seasons.

The focus will be on their oysters — Stingrays, Snow Hills, Olde Salts and Rappahannocks — prized by chefs for their sweet, briny flavor profiles. The Croxtons' tasting room, Merroir, in Topping, Va., is a forerunner and has received national attention for its ambitious young owners, who also have expanded into the Washington market. They appear with chef Jason Alley on the PBS series "Chefs A'field," a program not airing on the local network affiliate but broadcast nationally. More visible to locals will be construction at Merrior RVA, which has a projected opening date of September or October. rroysters.com.

Lotta parking: Among the improvements at natural foods grocer Ellwood Thompson's, the new parking-lot layout is earning raves from shoppers who've hated the previous layout for years. An added bonus, at least for meat lovers, is the waft of grilling beef emanating from neighbor Burger Bach. Looking east, construction continues on the new Fresh Market grocery store, where a spokeswoman says the new store will be approximately the same size at the area's other two Fresh Market locations, and is on track to open in late summer or early fall.