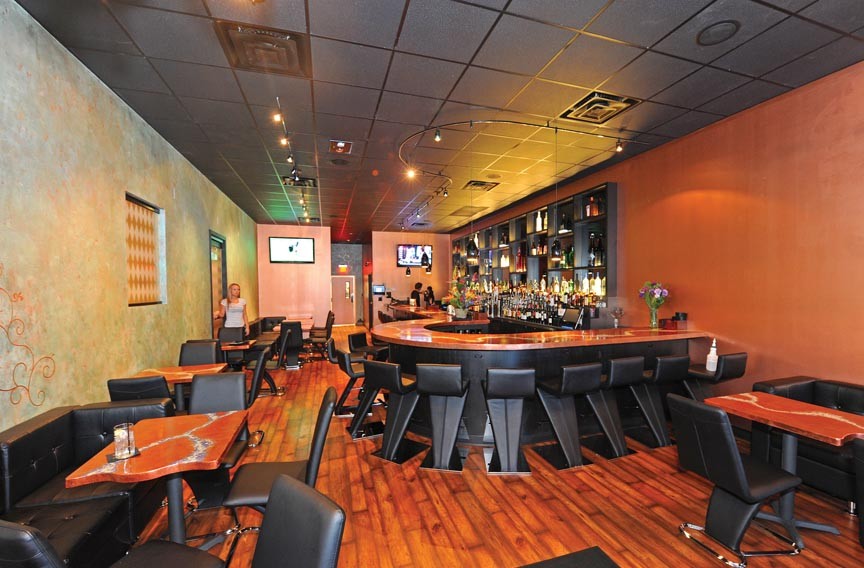 The ingredients are trendy — crispy chicken skin, pork belly, duck confit — and the tag line is "rustic eclectic." But with a sleek décor, concrete countertops, Italian lighting and a long bar and lounge, the new West End restaurant Accanto hardly lacks polish. It's been in the works for more than a year, as brothers Alberto and Peppino Mastromano of the longstanding Italian success Little Venice decided to expand their empire into the space next door.

Enter chef Ryan Baldwin, one of the city's food industry up-and-comers, formerly of Tastebuds on MacArthur Avenue. "They came to me with a great vision," he says of the Mastromanos, "knowing that I was capable of developing the whole thing and letting me run with it." Baldwin's menu of seasonal plates starts with salty, crispy bar bites to pair with 30 wines by the glass and cocktails from bar manager Ben Naylor.

Entrees have mostly familiar flavors, from Asian to Southern, but with upscale presentations and twists — oysters are served with a shooter of moonshine; grilled romaine gets hand-torn croutons; golden beet tots are coated in buttermilk. "I really wanted to bring what we would do in the city," Baldwin says of the menu, "but that will appeal to a lot of people out here." Open nightly except Sundays, Accanto hopes to find a late-night audience of food-service workers, who currently head to Keagan's and Halligan in Short Pump. 10478 Ridgefield Parkway. 741-1218. lvaccanto.com.

Change-up at 2113: It's already a downtown nightlife staple, but the self-described restro-lounge 2113 is getting a new food identity after some personnel changes. Chef Aaron Hoskins, recently of the Empress, and chef John Maher, of the pop-up restaurant Spoon, are collaborating on a series of new menus that combine French, Southern and Asian influences for brunch, lunch and dinner service. A roll-out of new tastes is expected late this month; meanwhile, Maher's fans can find him in the booth as a frequent DJ. 2113 E. Main St. 343-2113. 2113main.com.

Six Burner redesign: Chef Phil Denny introduces a new menu of small plates — as well as entrees — to a redecorated Six Burner Restaurant this week. Owner Ry Marchant says food will be more affordable, the place will have a more casual vibe, and "significant interior changes to décor" include new colors, surfaces and seating at the Fan District standout. An unveiling is scheduled for June 8. 1627 W. Main St. 353-4060. sixburner.net.

Amuse at VMFA: Among the jewels now on display at the Virginia Museum of Fine Arts, where the "Marahaja" exhibit is in full force, the fine-dining restaurant Amuse is doing tie-ins with Indian-themed cuisine on its changing menu. Look for a fixed-price dinner from 5-6 p.m. on Thursdays and Fridays. For $28 per person, an appetizer, entree and dessert are offered, with vegetarian and gluten-free options and drink specials. Amuse hosts its first wine dinner with Michael Shaps on June 12. Call 340-1580 for details and reservations. vmfa.museum.

Black Finn reboot: Many drinkers were surprised when the canal watering hole Black Finn Saloon closed in late May. An ownership change and some retooling of the former hotspot are in progress; meanwhile all of those sorority sisters and bachelorettes and other ladies vamping for photos on the bar's website will have to quench that desire elsewhere. It also isn't clear where the lawyers from upstairs will migrate.

Scouting kitchens: Now that Richmond has an unusually active presence on food-related television shows, word is getting out to producers that this is fertile ground. Recent scouting visits here include a Cooking Channel host checking out the Roosevelt, where chef Lee Gregory and owner Kendra Feather aren't sitting on their laurels. Meanwhile, watch for the Black Sheep and its giant chicken liver sandwich on the Travel Channel; Clemenza Caserta of Stuzzi on "Hell's Kitchen"; and Malcolm Mitchell on "Food Network Star" — all in June and beyond.

The Pits: Tuffy Stone of Q Barbeque returns to the "BBQ Pitmasters" series as a judge instead of competitor; the series moves from TLC to a new channel, Destination America, and airs Sundays at 9 p.m.