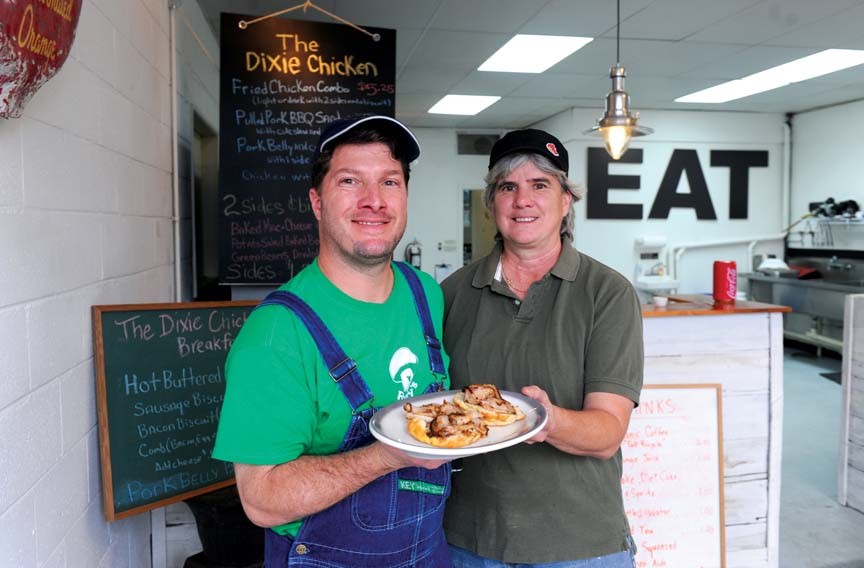 The chef, formerly of LA Grill and the Country Club of Virginia, among other kitchens, gets to wear overalls now, working a punishing breakfast, lunch and dinner schedule with a day of rest Sunday. His down-home food agenda gets a surprise or two, such as an Alsatian style mushroom soup and an occasional soft-shell crab sandwich; the smoked pork belly also is served as a sandwich with slaw.

Brady and co-owner Sheila Wilkins grew up on the Eastern Shore and in Amelia County, respectively, and learned to love and cook the same kinds of foods — she bakes the biscuits and runs the operation; he works the line solo, breading the chicken with his secret spicy blend and frying it to order with peanut oil. Neighbors are packing it for picnics in Forest Hill Park or maybe transferring from the clamshell boxes onto grandma's china.

Combo meals are less than $6; takeout chicken with biscuits is $15 for eight pieces. Because it's a small place still working out the logistics, call-in orders are advised. 1203 Westover Hills Blvd. 837-0935. Thedixiechicken.com.

Chefs on the move: Abram Jackson (Selba) is now cooking at Sette; Paris-trained, Washington and personal chef William Harik is heading the kitchen at Selba; Chris Herrington (Patina Grill) is at Parkside Café; Aaron Hoskins, who introduced a menu at the Empress and left two weeks later, is filling in at Secco Wine Bar and elsewhere.

Cupcake kicker: Dawn Schick, owner of Grace Manor Inn and Carytown Cupcakes, is running a Kickstarter campaign to build a new space for the cupcake biz next to Galaxy Diner. Carytown-cupcakes.com.