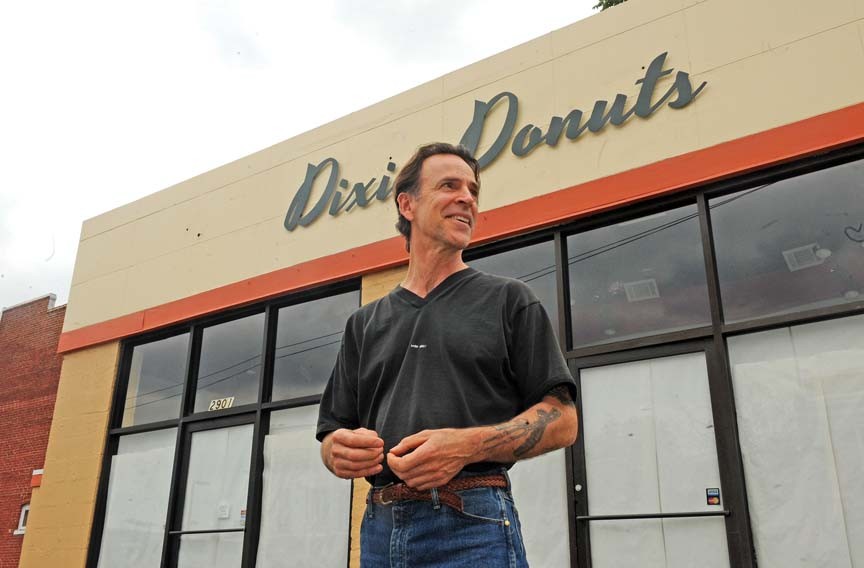 Not one to rush in without a lot of research, chef J Frank replayed a video about the Belshaw Donut Robot a dozen times before committing to it. The mechanics, the simple food theater and a chance to be creative but controlled in the kitchen all appealed to him. Frank's partner, Betsy Thomas, had a viable property in the short-lived Café Ole Carytown, which sat empty for months while several prominent local chefs tried to lure the lease away.

Thomas showed Frank a New York Times piece on Federal Donuts in Philadelphia, he says, "and I went, 'That's it,' By the next week we were on the road." He says Federal was very welcoming, and he's been writing ideas ever since — "I've got eight pages of possibilities so far."

Dixie Donuts, their about-to-open, carryout business, will sell cake doughnuts, Korean double-fried chicken and Belgian frites with flavored mayonnaise. Chickens will sell in halves and wholes, some glazed with barbecue sauce, chipotle or ginger honey, others with buttermilk ranch and spices in the Dixie style. Everything will be cooked to order, Frank says, and when items sell out, that's it.

The team took out a six-burner stove to make room for three fryers and the $8,000 doughnut robot. Next they're cutting a hole in the wall so customers can watch the doughnut-frying action. Antique bakery cabinets and some cosmetic changes will "pretty up the place and put some life in it," Frank says. More life comes from dulce de leche, caramelized peanut, smoked cinnamon sugar and toasted coconut — "flavors that aren't too cutesy" for the doughnuts. Coffee will be simply regular and decaf, and seating limited to a couple of chairs.

The big doughnut sign went up last week, just hitting the city's limit of 5 feet across. Frank hopes that eventually officials will let him trade for something larger. Look for an opening in the next month or so, marked by a "hot" neon sign in the window at 2901 W. Cary St.

It's Richmond Restaurant Week: New participants bring the number of restaurants to 38, making this one of the biggest deals in local food-biz history, benefitting Feedmore. See richmondrestaurantweek.com for details and links to some of the city's best dining places, all working for food relief for the community's hungriest. Props to Acacia's Aline Reitzer for leading the charge twice a year since the fundraiser's inception, and for responding to demand for a larger pool of players. Runs through April 29.

Going soft: Offers are coming to the table for Stronghill Dining Co., the Scott's Addition restaurant with a distinctive handcrafted aesthetic, which closed last week. Owner Jessica Simmons says she's meeting with a number of chefs interested in renting or buying the building at 1200 N. Boulevard. She'll concentrate on her nine tattoo shops and has hired some of Stronghill's staff for those businesses. Chef Campbell Tucker moved over to Bistro 27 in March to work with chef Carlos Silva and bartender Bobby Kruger.

Back in business: Parkside Café at 3514 Forest Hill Ave. has reopened after a chef and menu change, and is now serving Tuesday through Sunday. 864-8888.