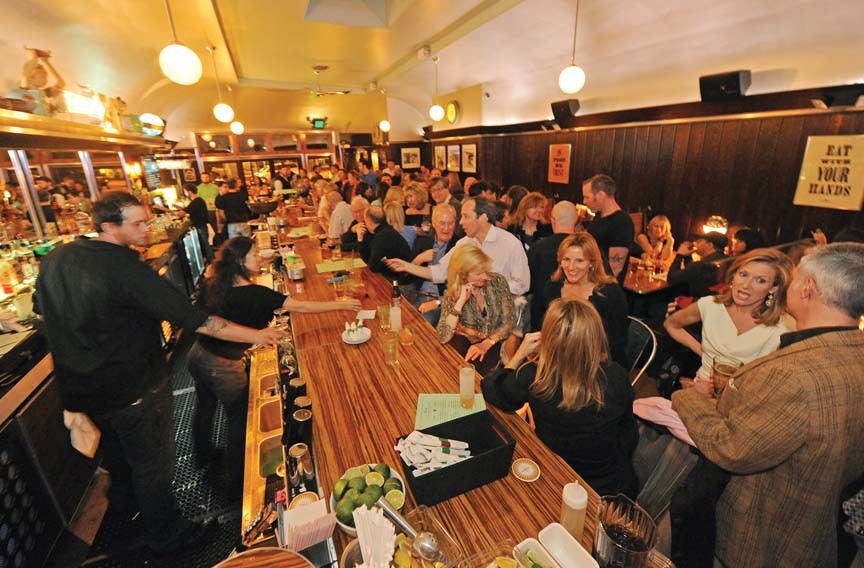 Not every soft opening is actually soft. In the case of the Continental, a supposedly quiet opening weekend for family and friends turned into a house so fully packed that owners Johnny and Katrina Giavos couldn't get out of the kitchen to greet them. The bar was six deep and booths were stuffed, while the crowd downed predictably gigantic portions of burgers, steamers and sliders, washed down by guava margaritas spiked with jalapeño.

The Continental, in the location of the longtime Westhampton landmark, Phil's, is transformed into a newer, vaulted and sky-lighted neighborhood diner with familiar themes. Wines are all-American, food is mostly hand-held, décor is nostalgic but modern, and the bar is generously scaled with a dozen trendy taps.

Former Phil's bartender Johnny Cates, who put in 18 years slinging drinks at the old place, was among the opening-weekend visitors. "They've kept the integrity of the bar," he says. "And believe me, Johnny's probably the best restaurateur in this city at this time. He knows what he's doing. And he kept the club sandwich on the menu." Those $7.95 stackers are classics, along with foot-long kosher franks, wheat-crust pizzas ($8-$9) pastas, salads and snacks. It's open daily from 11 a.m. at 5704 Grove Ave.

Now open: In Shockoe Bottom, a modern club with bright colors and atmospheric lighting claims the title of Richmond's first restro-lounge. The restaurant known as 2113 opened last week at 2113 E. Main St. after a two-year build out of a former jail cafeteria that sat vacant for decades. It couldn't look more different, and its early habitués decidedly are more dressed up and ready to party.

Ayars says a restro-lounge takes the best qualities of a restaurant, club, lounge and bar and delivers a customized experience that's service-oriented, casually elegant and reminiscent of larger cities. The group hopes to expand to more locations in a long-range business plan that targets Jackson Ward next. Weekday luncheon hours and Sunday brunch begin soon. 343-2113. 2113main.com.

Coming to M Bistro: Look for a new fixed-price lunch menu and wine dinner this month at the Rocketts Landing contemporary Southern and French restaurant from chef Michael Hall. mbistro-rocketts.com.