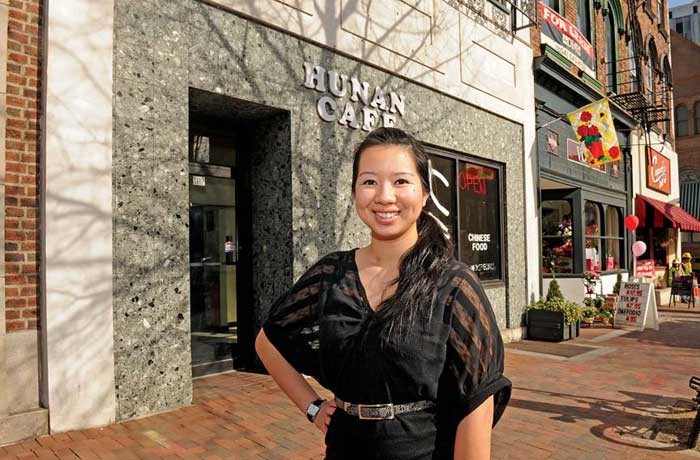 If new signs of night life downtown are any indication, optimism is on the rebound for local owners. Among them is the ambitious and focused Holy Yang (pronounced Holly), whose 18-month-old restaurant, Made in Asia, stands apart from others in Chesterfield County. Its sophisticated take on décor and cuisine, coupled with sharp marketing, has earned a strong following. Now Yang turns her energy toward a downtown project, A2, in the former Hunan Café at 1112 E. Main St.

A2 will be "another dimension of Asian food," Yang says — a lounge with a futuristic interior design that focuses on earth-friendly practices and upscale comfort for young professionals looking for a place to network and hang out. The 80-seat space is expected to open this spring, "and we want to make a positive impact on the city," Yang says. "This is going to be very cool."

In the same way that Camden, the mystery-breed dog, is a friendly mascot, the retooled Camden's Dogtown Market at 201 W. Seventh St. is a food business mongrel. Chef Andy Howell has turned the short-lived Ejay Rin noodle bar into a catch-all affair that's whetting the appetites of those who've known and loved his cuisine at Café Rustica, Avenue 805 and Zeus Gallery Café.

At the front door, instead of the Asian minimalist décor, stands an antique Wincroft wood cook stove. It's emblematic of the way Howell is running the place, fully hands-on and making nearly everything from scratch. That means smoking the bacon and pastrami, baking the hamburger buns and desserts, slicing the fries and brining the pickles. "I haven't gotten as far as making the ketchup yet," Howell says, "but it could happen." Diners can pick up a few pantry items, including things as varied as candy bars and wine, from market shelves that divide the somewhat more homespun space.

Camden's menus are written with Howell's usual humor: Nonconventional yard bird and greens, hummus a few bars, cultured Popeye spinach, thigh fry, new roasty swine and a dozen other dishes that change with the seasons. "If I'm known in this town for anything, it's that I haven't worked for Jimmy Sneed, Michelle Williams or Tuffy Stone," Howell says of more high-visibility owners here. He's also known for pricing food affordably: The lasagna for the people night on Mondays offers a choice of meat, seafood or vegetable casserole with salad, bread and dessert for $15. Other nights, entrees are $9-$18; brunch is mostly less than $10. Open Monday through Saturday for lunch, brunch and dinner. 745-6488.

Coming to Scott's Addition: A new business from Rick Lyons, former operator of Bandito's, Star-Lite and Republic, is about to open at 1213 Summit Ave., a block north of Broad St. The tiny, white and red building that was Sue's Country Kitchen for 25 years is now Lunch, a weekday breakfast and lunch spot. Lyons says that eventually he'll add dinner hours to the 25-seat cafe, while continuing his Northern Star Catering and Event Planning business. Lunch will serve panini, salads, desserts and boxed meals. With so much local competition, "you can't serve bad food in Richmond," Lyons says, and this is his chance to make a small place in "an awesome neighborhood with a lot of walk-in traffic" something personal. 353-0111. Eatlunchrva.com.

How romantic: Every restaurant worth its salt is running a Valentine's promotion most of next week. And although the love fest is widely known as amateur night by cynics, it's also an opportunity to show the local independents that their distinct character sets them apart from all those chains. As always be sure to check out our searchable guide to Richmond's restaurants.