Alley's Pasture is about to open downtown. 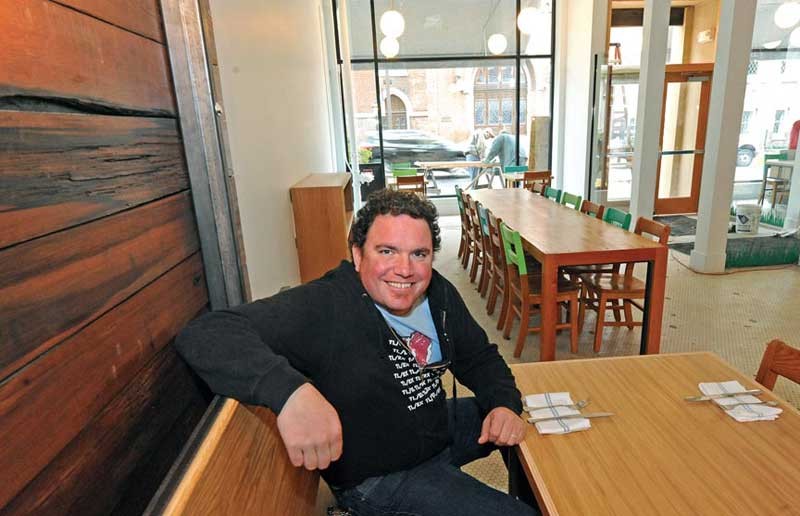 Pasture, the about-to-open downtown restaurant pairing chef Jason Alley and owner Ry Marchant, knows what it doesn’t want to be: “This place isn’t stuffy, it doesn’t take itself too seriously,” general manager Michele Jones says, “and it’s local and green without sacrificing delicious and fun.”

“The food is not aggressive, not pretentious, not crazy complicated,” Alley adds, “and it’s super-badass,” a descriptor not in the usual litany of soft-opening self-praise. What Pasture does want to be is a designated hot spot staffed with some of the city’s heaviest hitters.

This wasn’t poaching, Jones swears. “I didn’t make a single call” to recruit them from other restaurants, she says, “but when you work with people 70 hours a week you want them to be fun, and to translate that into something guests will feel.”

The room is spare and spacious; its statement feature is the wood-crafted walls reclaimed from a Hopewell building. Wide windows, simple lighting, school-house chairs, cantilevered banquettes and low-backed booths by craftsman Tom Brickman feel like Comfort’s educated cousin from a few miles north. The absence of art and even of bottles behind the bar (they’re all in concealed drawers, bucking the usual bar-look notions) makes the space a clean slate and a far cry from its days as the chic clothier Montaldo’s. That shop’s former fur vault is now home to the walk-in and beer cooler, which feeds a 16-tap lineup of Eastern seaboard brews. Metal barstools have spring-back rockability, the better to enjoy Alley’s self-described great taste in music, and one of the perks of ownership — a hand-picked soundtrack to cook, and woo customers, by.

Change at the Bank: The beauteous downtown restaurant Bank is temporarily closed for some retooling of menu and concept, spelling the end of the club Vault as we know it. Watch for details when the business reopens.

End of an era: Another local music venue is shutting its doors. Shenanigans, the long-running divey North Side pub-with-stage goes out with the old at the end of this year. Its owner is taking the MacArthur Avenue spot into a dining-only direction. Many area bands are bemoaning the loss of a semiregular booking and a loudly loyal audience.

Our review of the Roosevelt generated a fair number of comments among bloggers, tweeters, food writers and general onlookers about our new contributor, Ellie Basch. Should a chef write restaurant reviews?

It’s not a first for us. Joe Cates, a former chef and line cook, reviewed restaurants for Style Weekly for several years before retiring to academia. Here’s a reader comment from Eatingrichmond.com organizer and food blogger Jason Guard:

“Food reviewing generally amounts to a display of writing ability, personal tastes and acquired knowledge — professional or enthusiast. There are no widely accepted credentials for reviewers or agreed-upon regulations (though there are some tired templates floating around). Some say you have to have worked in the restaurant industry, while others believe that a reviewer should identify with the perspective of the public at large. Are we supposed to visit twice or three times, and on whose bill? Is it possible to be truly anonymous and/or to divulge all of our connections to the kitchen staff and servers in small-town RVA?

“Although there is nobility in following a few professional traditions, the idea that anyone should be silenced by gatekeepers, or some imposed standards, is a load of crap. There are no rules, except our own personally cultivated comfort zones. Typically, chefs sharing their favorite foods and pet peeves is a product that’s eaten up with gusto by Richmond readers of media, print or social. And the insights are usually educational for us non-industry eaters. The fact is, media needs to come at stories from a range of perspectives, the fresher and more intriguing the better. The last thing an editor should want to publish is another 700-word foodgasm about everyone’s favorite restaurant. We need content that makes us more discerning diners and pushes our restaurants to higher levels of deliciousness. If it takes a chef to do that, then hats off to the restaurant in question, and long-standing food-writers and kitchens should be put on notice to be weary of complacency.” — @RVAfoodie

What do you think? Email shortorder@styleweekly.com.