A suave spot comes to Grace Street with 525 at the Berry-Burk. 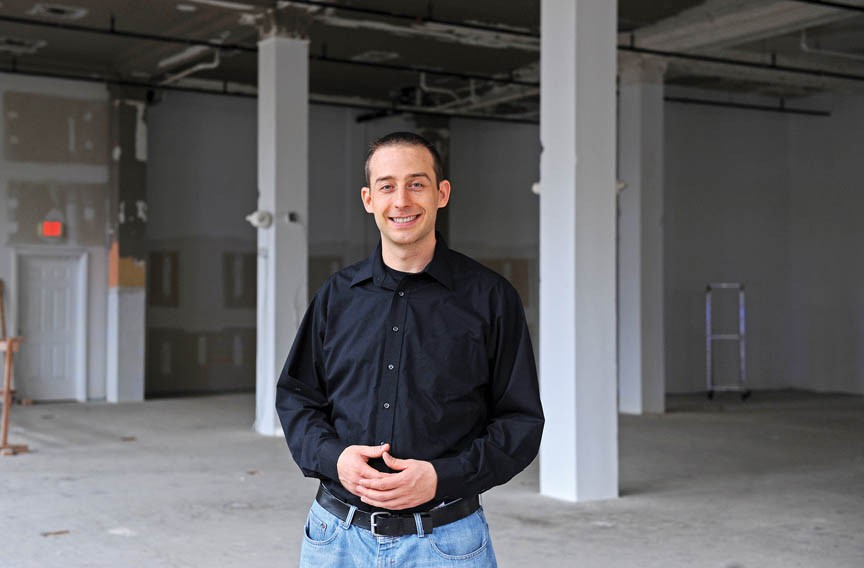 It was “yes” at first sight.

When Tom Haas stepped over the threshold at 525 E. Grace St., he saw his future, and it was in a decidedly upscale recasting of a Richmond landmark. Haas and partners will turn the former haberdashery into a restaurant, 525 at the Berry-Burk, “a place that will honor the history of the building itself,” he says, while drawing from the “sexier side of men’s fashions” for its design inspiration. The 150-seat business is scheduled to open in early 2012, and plans are well under way.

Haas, who at 30 has spent half of his life in the hospitality industry, is confident. His background at the Sanctuary, Lemaire, and other five-star, five-diamond properties bolsters his appreciation for quality. “I love the social aspect of dining, and I would love this to be the best date restaurant in Richmond,” Haas says, mentioning a sharable small-plates menu, extensive wine and cocktail lists, white linens and fittings that recall the glamour days of Cary Grant, “when suave was not over the top.” 525’s location across from the CenterStage will give it a pre- and post-theater presence with a prime view from its expanse of windows.

Chef Taylor Hasty is developing the menu using “flavors I grew up with,” he says, “classic dishes redone with better ingredients but still rustic,” that will complement a similar approach to craft cocktails. Of the upcoming opening of Pasture, the Ry Marchant-Jason Alley project in the former Montaldo’s building a block west, and others in the works at Miller & Rhoads and the Hotel John Marshall, Haas is enthusiastic. “We want downtown to be a destination again,” he says, “and there’s room for all of us.”

Magpie Mystery: The Magpie presents a murder mystery evening with Free Run Wine Merchants on Oct. 30 at 6 p.m. Chef Owen Lane will prepare a four-course autumn dinner paired with wines in an interactive experience that promises something different for Halloween weekend. Tariff is $65, all inclusive. 1301 W. Leigh St. 269-0023. themagpierva.com.

Richmond Restaurant Week: An impressive lineup of 29 or more of Richmond’s top restaurants will be participating in this 10th annual event Oct. 24-30. Diners get a three-course meal for $25.11, and FeedMore gets a significant boost for its community food bank and Meals on Wheels programs. Aline Reitzer of Acacia is volunteer founder of the fundraiser, which is the city’s most popular dining event. Reservations are advised. See details, menus and tips for success at richmondrestaurantweek.com. To support the nonprofit’s community work, see feedmore.org.

Toast to the Commonwealth: A five-course dinner prepared by chef Walter Bundy celebrates Virginia Wine Month at Lemaire in the Jefferson Hotel. The event is Oct. 26 at 6:30 p.m. and includes Michael Shaps’ wines paired with Virginia foods. Reservations for the $75 dinner are being taken by Lemaire’s new wine director, Greg McGehee, at 649-4629. Lemairerestaurant.com.

Slow Food Film Fest: Reel Food for Richmond is the theme of a new family-oriented film festival from Slow Food RVA. It’s Oct. 22, 9 a.m. to 6 p.m., at the Byrd Theatre and intends to “invigorate the passion to bring clean, fair food practices to the forefront” of the local community. Learn more at reelfoodrva.com.

Southern Thanksgiving dinner: Chef Michael Hall announces a four-course Thanksgiving dinner Nov. 24 at M Bistro in Rocketts Landing. Seatings by reservation run from noon to 7 p.m. The meal, “Southern fare with my flair,” Hall says, is $55 per person with a glass of champagne; wine pairings additional. Reserve at 652-2300.