Midlothian gets a second Shell, Folk Fest gets hungry. 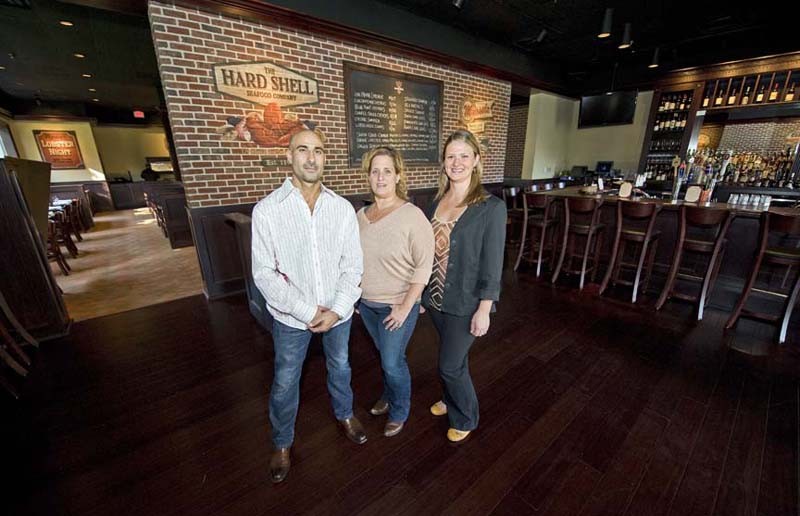 Last Monday’s soft opening at the new Hard Shell Bellgrade in Midlothian was about as busy as the large restaurant could be, with 240-some guests, a bar that was packed all night, a whirling cadre of servers and seven cooks working the line.

Owners Jared Golden and Michelle Williams of Richmond Restaurant Group knew they’d need to staff up; interest in the project was high and their guest list overflowed. Seafood and steaks flew out of the open kitchen; oohs and aahs were offered for the new bank of windows and lighted trees; the fireplace glowed near the giant new bar; and the patio was dressed with sofas, tables and piped-out house music that made the suburban setting seem more citylike.

It was just a year ago that the same space was christened Outer Banks Seafood Co. A large crowd gathered that time too, but later customers complained that quality and prices didn’t match expectations, and the business closed in a matter of months. Hard Shell hopes to get the equation right by deploying the same formula that’s led to long-term viability for its Shockoe Bottom flagship. Golden managed the build-out process, which mimics the original’s brick walls, murals and dark-wood detailing. Its separate banquet rooms have their own bar, fireplace and a separate catering kitchen, something of a rarity in the neighborhood.

The business, Williams notes, has no freezer — a growing trend among fresh-conscious chefs and owners — and the bright, stainless steel kitchens “are larger than some of our restaurants!” Leandra Dunlevy is operating partner in the venture at 11400 W. Huguenot Road. Dinner and bar hours from 4 p.m. daily. 464-1476. richmondrestaurantgroup.com.

Folks get hungry: While the Richmond Folk Festival continues its culinary evolution from fried fair food to more worldly flavors, it’s possible to find something for most palates for less than $10. Among the newer vendors this year is Goatocado, the vegan and vegetarian food truck, serving sandwiches filled with barbecued jackfruit, smoked Gouda with black beans, or avocado and walnuts.

Mexican restaurant La Milpa, a Hull Street hideaway with a fervent following, will offer tongue tacos — unwittingly fitting for a musical event. Shockoe Slip classic Sam Miller’s will bring out on-the-shell Rappahannock oysters and its signature crab cakes. (Watch for changes to the restaurant this fall while it unveils a new concept.) It’s a hard-work weekend for the diverse lineup of 31 food vendors, but most say the effort goes well-rewarded in sales from a sizeable crowd that comes ready to party. richmondfolkfestival.org.

Arcadia in progress: John Van Peppen is in the midst of what he hopes is a six-week redo of the former Café Gutenberg at 1700 E. Main St., turning the two-level historic building and former peanut factory into a 135-seat space serving “a contemporary interpretation of Continental cuisine.”

Van Peppen, whose restaurant credits include Fleming’s, DeFazio’s and the Virginia Museum of Fine Arts, is redecorating the space using furnishings from the recently closed Copper Grill restaurant at Short Pump. A chef with longtime Richmond roots is about to sign on to prepare Braveheart steaks, fresh seafood and sides, such as extra-smoked Gouda mac and cheese. Wines and craft cocktails will be poured at a large new bar; outdoor dining and an upstairs private party space also are getting face-lifts while construction moves forward on Van Peppen’s tight timeline.

“My vision is to try to grow this farmers’ market,” Van Peppen says of his neighboring business, “and to buy ingredients from farmers who in turn will get exposure.” To work at Arcadia, whose name is drawn from Roman mythology, “people have to have the hospitality gene,” he says, “and be prepared to take care of guests’ every need — because hospitality is the cornerstone of this business.” Follow the restaurant’s progress at arcadiarichmond.com.

Gut job: The former McLean’s space at Lafayette and Broad streets is getting a complete renovation now that its longtime tenant has moved east to larger quarters. Coming in, according to construction workers there, is a Quiznos’ sub shop.