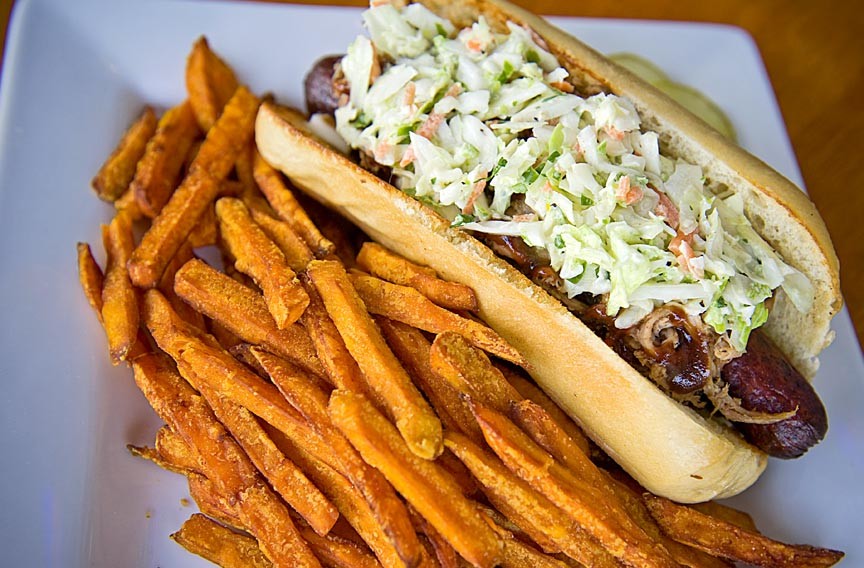 Summer may be traditionally slow in the restaurant biz, but that's not stopping more than a dozen owners from rolling out new dining options around town. Add these to the 1,200-plus independents already here and realize, once again, how saturated Richmond has become with restaurants — and how much their owners desire your business, stat.

Hogshead Cafe: Brings wood-smoked barbecue and ribs, house-made sauces and desserts, and cozy familiarity to a new 35-seat space at 9503 W. Broad St. Owners Kim and Steve Logue are serious about customer satisfaction, and their menu strays beyond the usual. The bacon-wrapped jumbo beef hot dog is deep fried and topped with pulled pork; the Cuban hog sandwich, smoked salmon Caesar salad, build-your-own burger and little piglets menu are among the choices. Hogarita cocktails, wines and beers are specifically chosen to compliment the barbecue, a tweaked Memphis dry rub cooked over apple- and cherry wood on an Oklahoma smoker. Lunch and dinner Mondays through Saturdays. 308-0281.

Benny's BBQ: Just opened in the Stony Point Shopping Center, this former Stratford Hills landmark has a much larger space that seats 150, an expanded menu and the delayed gratification of owner Richard Cacciotti, who's finally turned a lost lease into a better deal. Closed Sundays. 3044 Stony Point Road, No. 23. 320-7447. bennysbbqonline.com.

The Citizen: A stealth project in the even less-known former Clayton's at 909 E. Main St. has just opened with a top local chef. Greg Johnson, former sous chef at Amuse in the Virginia Museum of Fine Arts, has taken over the downtown cafe and quietly opened a breakfast and lunch spot in a lower-level space in the Mutual Building. Fresh local eggs in $5 omelets, Victory Farms salad greens dressed in basil vinaigrette, and tortas such as pulled pork with cabbage for $5.75, and sides of roasted beets, curried chickpea stew, braised greens and cumin potatoes show that food is front and center. Johnson has been cooking in Richmond for 28 years and is finally in the ownership role. Hi counter-service cafe holds just 22 seats, but outdoor dining is in the plans, with eventual beer and wine offerings as things take off. 780-9098.

Ejay Rin Noodle Bar: Two leading chefs, an affordable premise, an underserved neighborhood, a cool and casual setting with indoor and outdoor appeal — it's a ticket ready to be punched in Manchester. Bill Foster and Andy Howell expect to open their joint venture inspired by Momofuku this week in the Corrugated Box Building, 201 W. Seventh St. 745-6488.

M Bistro & Wine Bar: Opening this week for lunch, with dinner hours to follow, this project from chef Michael Hall is the third dining spot in Rocketts Landing. Fine French comfort cuisine with southern touches in a contemporary space with retail section for gourmet comestibles and wines. Closed Mondays. 652-2300. mbistro-rocketts.com.

The Magpie: In Carver, a handcrafted redesign of the former Leigh Street Bar & Grill nears completion. Chef and owner Owen Lane (Stronghill Dining Co., the Track) and his fiancee, Tiffany Gellner, are refining the menu and drink list, and building a following for an interior that showcases the carpentry talents of Big John Bullen, former Helen's chef, and a team of creative people intent on bringing something unusual to the market. 1301 W. Leigh St. 269-0023. themagpierva.com.

Olio Downtown: The gourmet bistro and market in the Fan gets its second location downtown at 600 E. Main St. in the former Just Willie's cafe. Look for weekday lunch hours for Olio's well-regarded deli sandwiches, salads and other fresh fare. It's expected to open this week. oliorichmond.com.

The Roosevelt: Hiring is in progress, final touches are being added, and permits are being granted at this new cafe from chef Lee Gregory (Six Burner) and Kendra Feather (Ipanema Café, Garnett's). A retro-inspired update on the former Que Pasa space at 623 N. 25th St., this neighborhood charmer is high on the hot list for its culinary team and its handcrafted concept and execution. Opening any day now. rooseveltrva.com.

Buz and Ned's: After a series of delays, construction resumes at the former Fuddrucker's, 8205 W. Broad St. near Parham Road. Buz Grossberg says he switched architect and contractors for the new, larger, second location for his popular barbecue. "Everyone was hand selected for their honesty, ethics, integrity, construction experience, financial stability and realistic bid pricing given the law of supply and demand in the construction industry today," Grossberg tells Style Weekly in an email. "Henrico County approved a new building permit and we will commence construction any day now. Completion will take 120 days." buzandneds.com.

Stella's: Work is nearly complete at this new brick building at 1012 Lafayette St., and permits are in progress. Stella Dikos, high in the culinary pantheon of Richmond, is namesake of this third location for her Greek-inspired restaurant, opening by late summer or sooner.

Next week, more restaurants in the works for Richmond.