Maat Free shows us Vegi Luv is all around. 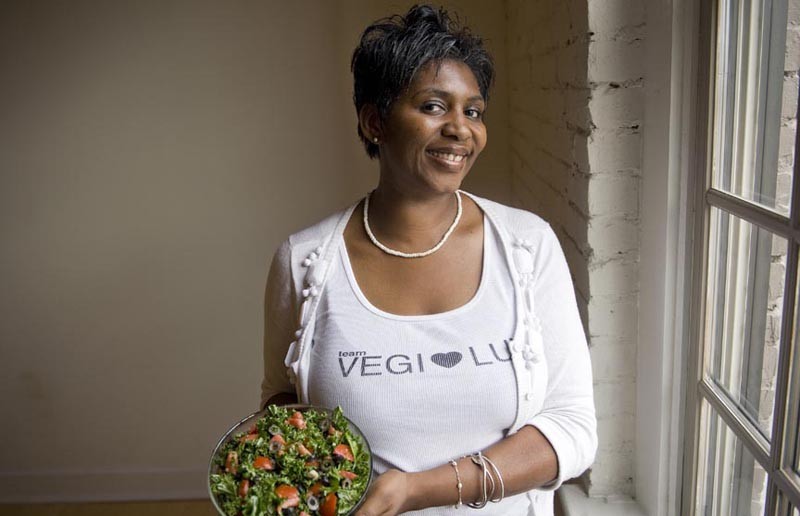 Maat Free is entirely serious and ebullient as air when she calls herself the Oracle Portal and a brilliant visionary. Her all-vegan food business, Vegi Luv, is the result of her “innate ability to transmit positive energy through delicious plant based food,” her biography reads, and she’s an energetic enthusiast on a healthy-eating mission. Free’s signature dish, RBG love, combines tomatoes, olives and kale in nutritional yeast; Asian spices and flavor elements from the Afro-Latin diaspora are alkaline-rich “pure fuel for positive pursuits,” she says.

Maat Free calls her ancestors her kitchen angels, particularly the late chef Muhammad Ndao of the former Taste of Africa downtown, who “guides her spoon as she stirs every meal.” Vegi-luv.com. 564-6163.

Bookish on wine: Todd Kliman, Washingtonian magazine’s food and wine editor, presents his new book at the Virginia Historical Society on June 30 at noon. Kliman’s “The Wild Vine: A Forgotten Grape and the Untold Story of American Wine” describes some Virginia connections and traces the return of the Norton grape. Tickets to the society’s Banner Lecture Series are $4-$6. See details at vahistorical.org.

Booze with blimp: In one of the splashier promotional tours, Hangar One Vodka rolled into the Chesterfield County Airport on Father’s Day with an Airstream trailer, a 15-person flight crew, portable bars, tables and grills, a lineup of flavored vodkas, and a helium-filled, 120-foot blimp to take passengers on (nonalcoholic) joy rides. At ground level, bartenders from Balliceaux, the Blue Goat, Wild Ginger and the Jefferson Hotel mixed craft cocktails with the California brand, which is produced in a hangar near San Francisco. The blimp tour stops in 30 cities.