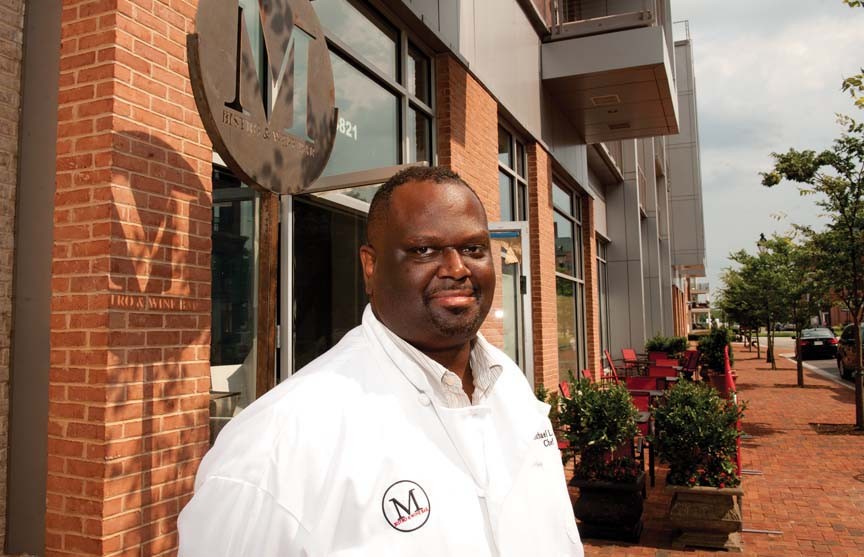 He’s not the first one to look at the space — a handful of local chefs have tried to close the deal, starting with Adam Schumm of dearly departed Zuppa, and moving on to an A-list of operators who couldn’t make the numbers work. But for Michael Hall, who’s 26 years into a cooking career that’s earned him a politely fanatical following, a sleek space in Rocketts Landing is the project he’s been waiting for.

The contemporary condo tower called 210 Rock reminds him of buildings in Washington, where the food interests him and the street-front setting calls out for all-day business. Developers enticed Hall to open M Bistro & Wine Bar there at the end of this month, setting in motion Hall’s three-year business plan that brings gourmet comestibles, wine and seafood to other parts of town.

Hall, unafraid of rich flavors and Southern stylings — now to be executed on a whopping 16-burner stove — has a resumé that still seems enemy-free: five years of four-diamond ratings at the Berkeley Hotel and winning runs at Nonesuch Place and the Bull & Bear Club, which he continues to oversee for now.

“This is what chefs live for,” Hall says. “We want to call all the shots — it’s an exhilarating feeling. I want [M Bistro] to be a polished, professional place — it’s not a nightclub. We’re food, service and wine. Morning coffee, chocolate croissants, and we’ll get into making our own donuts,” he says. Anthony Williams is sous chef with eight years as Hall’s right hand; both will be visible in the open design of the 3,000-square-foot space. A mahogany bar, booths and patio seating will top out at 100 guests.

M Bistro’s small retail section will have house-made country paté, jams and olives, cases of wine, chocolate truffles and whatever residents ask for, perhaps the house-made sauvignon applesauce or fresh potato bread. Daytime service will begin a few weeks before dinner hours, with a still-secret brick bread for lunch, dry-rubbed barbecue bacon on burgers, crab cake salads and lobster rolls in the $10 range; dinner will run from lamb spare ribs to nightly fish, duck and beef, though it’s the sides such as caramel corn pudding that appear to create addictions among his followers. Private parties already are on the books.

Hall laughs about his reputation as a likeable guy. “I think I’ve always been cordial and spoken through my food,” he says. It was his salmon salad at Nonesuch that attracted Hall’s first celebrity guest, when Jimmy Sneed came in regularly to order it for lunch. “Jimmy put me on the map,” Hall says, by inviting him to do fundraisers and market himself as a chef. Now Hall is running with an opportunity that feels well-timed; he’s spending far less than the nearly half-million-dollar budget erroneously reported elsewhere, but is fully invested in the goals while maintaining humility. “It’s gonna be the hottest place opening on this side of the tracks,” he says, kidding — knowing it’s also the only one. 4821 Old Main St. 652-2300. mbistro-rocketts.com.

Out of it: Just a few weeks after Liberty Valance turned up on the casualty list, the Fan steak and burger classic Davis & Main shut its doors, posted a “closed today” sign, turned off the voice and email and otherwise signaled an ending. Both places had been listed for sale after 20 or more years of once-robust business. Also this month, Byram’s Lobster House changed hands, and Posh club in Shockoe Bottom was ordered closed for tax problems.

Still in: Café Gutenberg, a corner fixture in Shockoe Bottom with a driven team of chefs, remains open. Although partners Jen Mindell and Garrett Berry are looking for buyers (as Style Weekly reported in April), they’re still serving vegan and carnivore foods every day but Tuesdays while they search for smaller quarters elsewhere. 1700 E. Main St. cafegutenberg.com.

OMG Café: The owner at this new Church Hill spot, Deandre Johnson, says the restaurant is selling 100 orders of chicken and waffles a day from a list of soul food options. “We have large portions and we don’t use any canned food,” he says. Smothered chicken and pork chops, garlic mashed potatoes and fresh cabbage are other menu highlights; most entrees are less than $9. 412 N. 25th St. 269-0531. omgcafelounge.web.com.