This Week: Phil's Out on Grove, the area's most famous food and more. 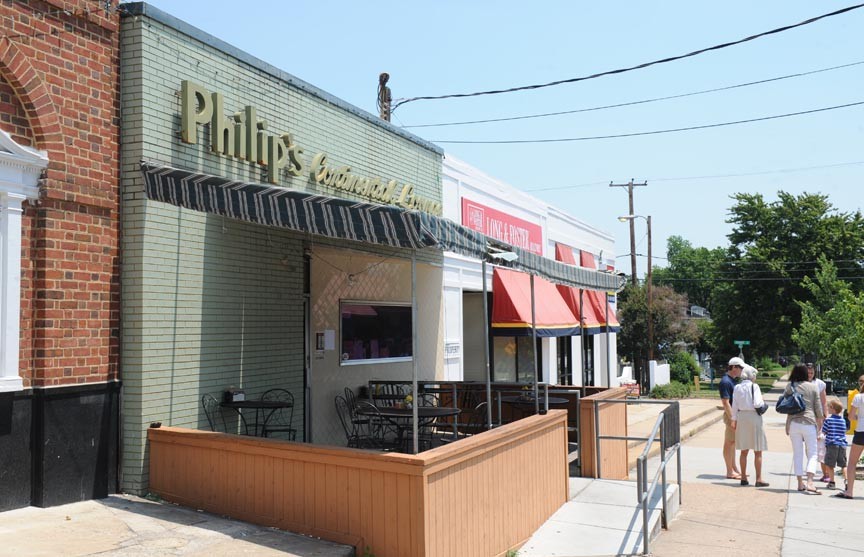 When asked how ridiculous it is to try to open two restaurants in the same year, Johnny Giavos sputters, “I didn’t intend for that to happen,” and switches topics to the regional high school volleyball and soccer teams he coaches. Giavos takes possession of Philip’s Continental Lounge next month at 5704 Grove Ave, which he hasn’t been inside in six years. The Shaheen family continues to own the building.

“I tried to buy that building 15 years ago,” Giavos says; instead he went on to open 3 Monkeys, Kitchen 64 and its seasonal ice cream shop Sweet 95, Gibson’s Grill at the National (sold this year; posting strong sales, he says.) His additional holdings at Kuba Kuba and Sidewalk Café give him buying power and the rare ability to back his own projects.

At the same time, Giavos and his wife Katrina are preparing for the opening of Stella’s, a Lafayette Avenue venture that returns Stella Dikos to the culinary spotlight five years after closing her Fan District restaurant. Hedging bets, the family expects to open Stella’s by mid-July.

At Phil’s — Giavos has yet to decide on a new name — Giavos says he’ll serve rotisserie-cooked roast beef, chicken and corned beef sandwiches (“a neighborhood place with American classics, nothing fancy”). It will have a full bar, not dissimilar to the approach that kept Phil’s in business since 1939. Phil’s lumpy vinyl booths, club sandwiches and beer were as predictable as plaid shorts; a wave of dismay swept its regulars and most recent operators Kyle and Katy Measell, who end their run June 25 and are trying to reopen elsewhere.

Giavos expects the completely gutted and redesigned restaurant to open by the end of this year.

Famous food: Still secret is the upcoming appearance of the Black Sheep — the pride of Carver — on an episode of “Road Eats,” a new Discovery Channel series that sends three pro truckers “looking for America’s best food.” Chef Kevin Roberts prepared the chipotle roasted pork battleship the USS Congress for series co-star Meleese Mabery, who “was wonderful to work with and made herself a welcome addition to our kitchen that day,” Roberts says of the recent taping. An air date has not been announced.

Also, the tres leches cake at Kuba Kuba got some glory on the Food Network’s “The Best Thing I Ever Ate,” produced by former Richmonder David Hoffman, which aired earlier this month.

Anthony Bourdain and Eric Ripert, who bill themselves as the good and evil of celebrity chefs (though both get more air time than knife work these days), take the stage at Charlottesville’s Paramount Theater Oct. 30 at 8 p.m. Tickets are on sale now for $44.50-$99.50; the latter astonishing VIP price gets access to a book-signing after-party at Ten Japanese restaurant. Details at theparamount.net.

John Mariani, beloved by the Jefferson Hotel for bringing notice of the new Lemaire to Esquire magazine readers, is honored with a dinner there next week. An Evening with John Mariani on June 22 is now waiting-list only; the menu of Italian food and wine is inspired by his book “How Italian Food Conquered the World.” Chefs Walter Bundy, James Schroeder, Patrick Ehemann and new pastry chef Sara Ayyash will collaborate on the four-course, 160-guest dinner. For more on Mariani, see p. 37. jeffersonhotel.com.

Veggie fest: Bands, vegans, restaurants and nonprofits come together for the Richmond Vegetarian Festival 2011, promising a good time for dogs and humans. The free, annual event — recently recognized by Parade magazine — is June 18 from noon until 6 p.m. in the azalea gardens at Bryan Park in the city’s North Side. Attendees are asked to bring a can of vegetables for the Lamb’s Basket food pantry, and an appetite for meat-free flavors from all over the map. veggiefest.org.

Hermitage Grill: After more than a year of post-fire construction, this 11-table North Side spot is identified by the meat smoker outside — barbecue is a menu staple. Lunch and dinner Tuesday through Friday, dinner Saturday, brunch Sunday from 9 a.m. to 3 p.m. 6010 Hermitage Road. 264-7400.

Filled to overflowing: At Caliente in the Museum District, the Luther bacon cheeseburger served on glazed donuts, and the Vegetarian’s Nightmare — a half-pound burger topped with pulled pork, brisket, ham, bacon and two cheeses — are selling well, says owner Dave Bender, along with more figure-friendly options and some old recipes from the former Texas-Wisconsin Border Café on a menu introduced last month. calienterichmond.com.