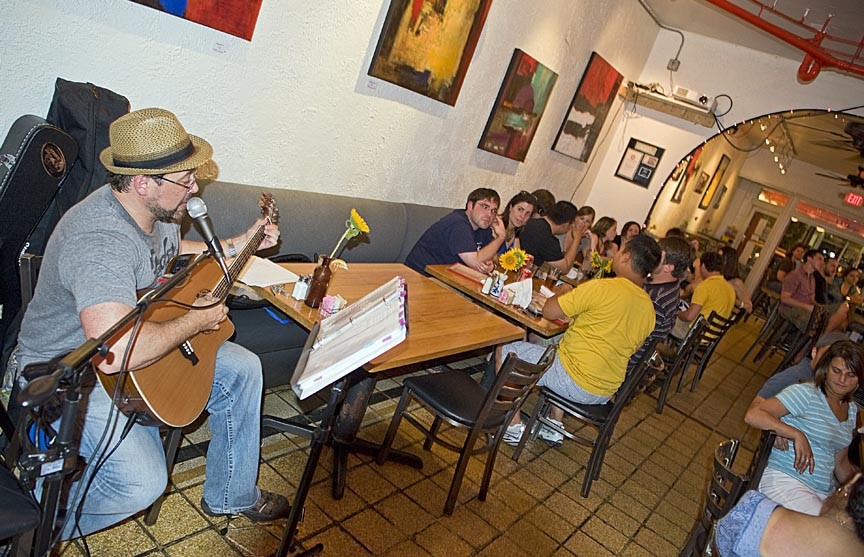 Just a few months back, Style Weekly noted the rare examples of live music during dinner hours at Richmond restaurants. Suddenly there's almost a surfeit. Some examples include jazz Saturday nights at 7 at Barrel Thief on Patterson Avenue; bluegrass and country music at Grandpa Eddie's at 8 p.m. on weekends; local acts at Nuevo Mexico in the Shops at Stony Point on weekends; also at Sunset Grill and Enzo's in Goochland and Big Al's Sports Bar.

Other local restaurants with music before late-night include Commercial Taphouse, Legend Brewing, Best Café at the Virginia Museum of Fine Arts, Bogart's in the Fan, Brunetti's and Gus' in Mechanicsville; Tobacco Company, Ruth's Chris Steakhouse, Jimmy's Restaurant, the County Seat in Powhatan, Ellwood's Café, Robin Inn and Davis & Main, among others.

Gibson's Grill at the National now features Sunday brunch with an acoustic guitarist; Marshall Street Café has a jazz pianist at its Sunday brunch. In a town where working musicians are glad to start early, get a free meal and an appreciative audience, the formula seems to be picking up steam.

Pete's Great Food has opened its concession-stand operations at the Landing at Byrd Park, replacing last summer's operator there, Sally Bell's Kitchen. Owner Robert Peters says the business won the bid in March and opened over Memorial Day weekend. So far, falafel sandwiches are top sellers from a menu of classic sandwiches; house-made potato chips, come with every order. Boxed lunches can be served on a Frisbee by request, and customers can call, email or fax in orders via petesgreatfood.com. Open from 11 a.m. until dark daily on the lake. Pete's also rents paddleboats at the site.

CC Wok Chinese Café has opened in the former Zen Asian Bistro space in Midlothian. Lunch and dinner are served Tuesday through Sunday in the cafe which has a traditional Chinese-American menu and a pending liquor license. 11400 W. Huguenot Road in the Shoppes at Bellgrade. 893-3087.