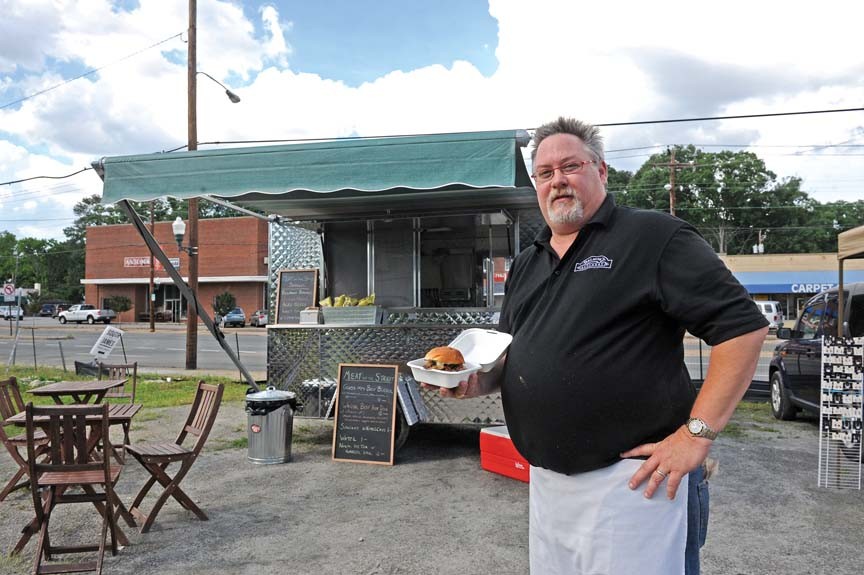 Fantasies on wheels can run in lots of directions. Airstreams, Harleys and Corvettes all have their mystique, depending on who's doing the dreaming. Same for the stainless steel beauty that is a 2009 Creative Mobile Systems custom food truck, now rolling with ex-wine merchant Henry Reidy at the wheel.

Reidy's new business, Meat on the Street, pulls up at some of the higher-visibility events around town — First Fridays next to Quirk Gallery, Wednesday afternoons at the new Souther of the James Market near Westover Hills Boulevard and Forest Hill Avenue. Reidy also books a lot of private parties.

The rig is a top-notch — "a full restaurant kitchen on wheels," Reidy says — a 6-by-10-foot trailer with a 12-foot awning and the works inside: a flat-top griddle and grill, two burners, a steam table, three built-in coolers, two exhaust hoods, a three-compartment sink so nice "the state Health Department hasn't seen something like this," Reidy says of the roughly $30,000 investment. He's selling products from his wife Tanya Cauthen's established Belmont Butchery and local farmers' markets.

"We're not going to be overly complicated," Reidy says of the chalkboard menu's three or four items — usually grass-fed burgers on Sally Lunn rolls for $8, wagyu beef hot dogs, sausage and egg biscuits, and eggs scrambled with asparagus, spinach and green onion. "We're cooking to order, doing a restaurant-quality product out of a small space," he says. "It's not grandpa's hot dog cart." And there's almost always vegetarian option. Compostable plates, cutlery and cups are for takeout or dine-by at a couple of tables under the awning.

Reidy's not the only one riding the food-truck wave that hit the West Coast a decade ago and is now making its way deeper into Richmond's Twitter-fed trenches. Christopher's Runaway Gourmay, Nate's Taco Truck and Boka Tako are the old timers, and chefs such as Carlos Silva of Bistro 27 downtown are next in line. Silva's been scouting the right vehicle up north and is quietly developing a concept. Stay tuned.

Bottle fed: Both locations of Barrel Thief are adding hours and new menu items. They now open Mondays through Saturdays until 11 p.m.; the kitchen closes at 10. A new menu expands the bruschetta line-up and includes food specials from 4 - 6 p.m., with Friday tastings from 5 - 7:30 p.m. through summer. Also, the Patterson Avenue location has live music on Saturdays, 7 - 10 p.m. barrelthiefwine.com.

henry reidy meat on the street
Prev
Next