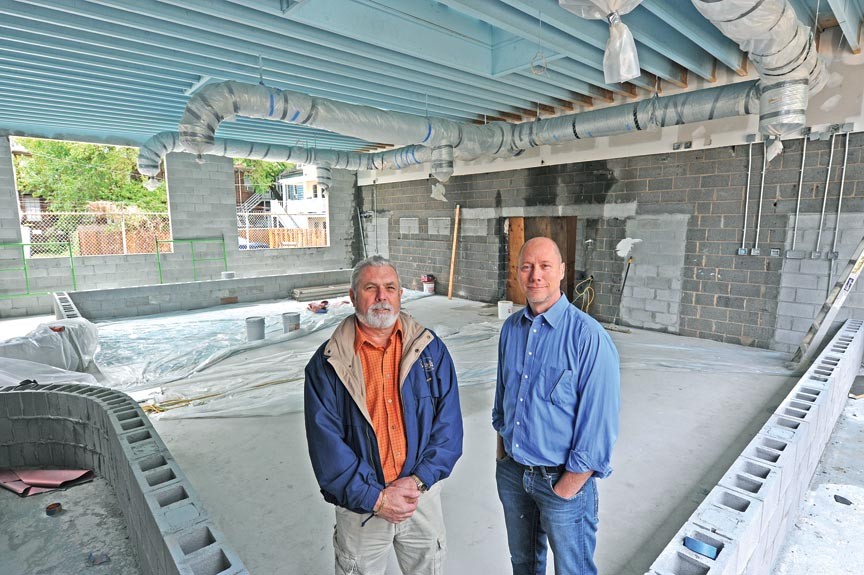 If you get technical about it, Selba would be selva, meaning jungle in Spanish. But Todd Boyd takes a little leeway in a project notable for the high degree of specificity in its mission. Details such as planting four types of bamboo are keeping minds racing for Boyd and Alan delForn, who owns the property and part of the restaurant. So far, the pair's three-year discussions have wrought an extreme build-out now moving toward a punch list.

The building was once Cliff's Honda, a '40s era shop at 2416 W. Cary St., and the partners, who are also real estate brokers, pounced when it came on the market. For delForn, it's a two-block walk from his bar-oriented business, Star-lite Dining, in a neighborhood that could cater to a different crowd altogether. Selba's significantly expensive redesign tops 6,000 square feet, with a separate lounge-style smoking room facing the street, its new-tech ventilation system a feature of interest.

The front dining room has so-called Mafia booths and tables widely spaced. A baby grand piano sits at the entrance, to be played by performers, students and perhaps guests on amateur nights, a rare piece of entertainment during dinner hours here. Beyond the long wood bar by noted craftsman Josh Kayer, is the project's jumping off point — an airy garden room with planting beds, folding windows, skylights and romantic lighting through the bamboo, with edible fruit, herbs and blooms that change seasonally along with the menu.

Look for kitchen manager Abram Jackson's take on what Boyd describes as healthy comfort food, casseroles and ragouts, Californian in approach using local farmers' goods. Boyd's graphic-design background and avid interest in eco tourism drive the look and philosophy of the project. "Get to know your food," he says. "We will disclose the nutritional content, the sources," and accommodate low-salt, gluten-free and other special requests, without an overt hand. Servers will be highly trained, he promises, and the staff will sign pledges to be harmonious and happy. Is this a new Richmond? One answer comes by midsummer.

The Hard Shell: In their first move south of the James, restaurateurs Michelle Williams and Jared Golden are opening the Hard Shell Bellgrade in the former Outer Banks Seafood and Bottega space in Midlothian. Longtime general manager Leandra Dunlevy is managing partner in the 8,000-square-foot business, the largest in the Richmond Restaurant Group's six holdings. It will have a 50-seat patio and the same raw bar, fish and steak menu as the 1995 Shockoe Bottom forerunner.

"The location has all the elements we need," Williams says, "and a lot of friends out that way have asked for it. We want it to look as much like the original as possible," and demolition started last week for a fairly extensive redo. Murals, a fireplace in the bar, a stage with potential jazz acts, and three private rooms will pitch toward rehearsal dinner biz, long a mainstay for the home base. Dinner hours will be the focus for now, and a September opening is the target.