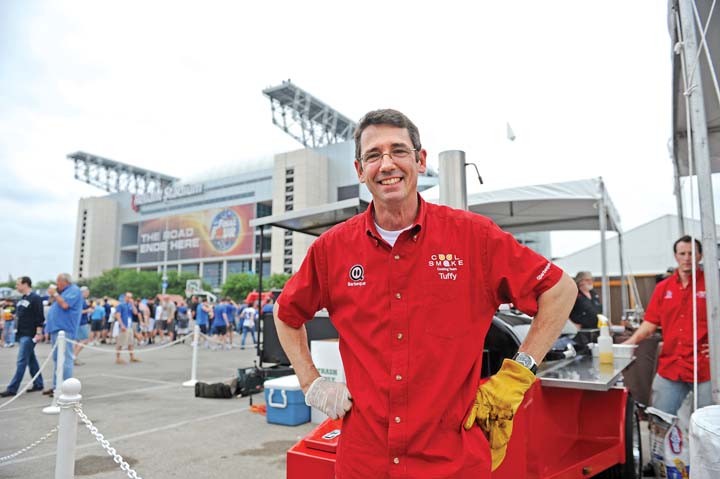 Tuffy Stone might need an agent. The pit master of champion barbecue team Cool Smoke and owner of Q Barbeque and A Sharper Palate just finished an eight-day filming session for a program set to air on CBS next month. It's called "The Ultimate Barbecue Showdown," and puts Stone against Neil Strawder from Bigmista's Barbecue, Bubba Latimer of Bub-Ba-Q, and Myron Mixon of Jack's Old South. This follows last year's TLC channel pit master series, which helped drive up Stone's screen cred while his barbecue was winning awards on the highly competitive circuit.

Filming took place just outside Reliant Stadium in Houston during the Final Four basketball championship, although Stone didn't get to see the Virginia Commonwealth University Rams play. He can't disclose what he cooked or how he competed, but acknowledges, "They had to pat my cowlick down," before he faced the cameras. "Just let me light my fire and get some food on, that's what brings me peace," the accidental star says.

The show airs May 28, and will be the first time competition barbecue is featured on major network television. Next up, expansion plans for Stone's businesses and a return to Memphis, Tenn., for another championship. "I could work 18 hours a day and never be caught up," he says, speaking by phone on the hunt for a crayfish lunch in the bayous of Louisiana.

Food in Petersburg: One of Petersburg's most-anticipated food events takes place April 16 from 1-4 p.m. when the sixth annual International Food Tasting and silent auction return to the Petersburg Regional Art Center, 132 N. Sycamore St. The women's committee for the Petersburg Symphony Orchestra stages the event, which includes local restaurant fare, live music and a gathering of symphony supporters. Tickets are $30, available at Palmore Decorating Center or the Globe, both on Sycamore Street.