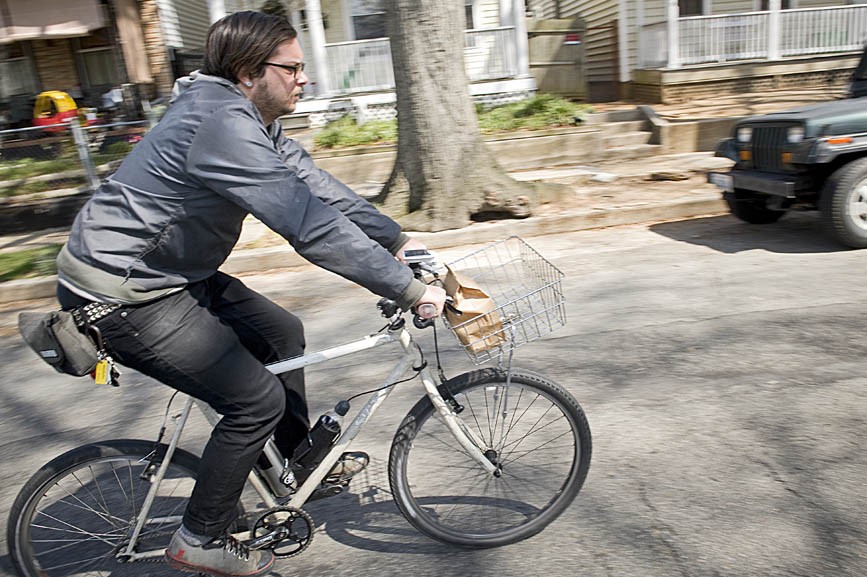 Ten months into his food-delivery business, Frank Bucalo is losing weight from the 20-plus miles a day he's riding. But the 28-year-old is gaining customers and restaurants that appreciate what the Quickness RVA team can provide: fast, economical food delivery by bike.

"This is one little step to be friendly to the earth," Bucalo says, "and we think great restaurants deserve great delivery options." He and his riders act as a street team for their hand-picked businesses, delivering menus to dorms, getting feedback from customers and ensuring that deliveries happen fast while the food's still warm.

Best time so far: A burrito delivered within eight minutes from phone call to door. A recent feat was a nine-pizza order plus sides, delivered with alacrity on a bike loaded with custom thermal bags sewn by local crafter Bree Langford.

"We have an advantage on bikes," Bucalo says of the team's ability to maneuver through traffic and find shortcuts. He was a restaurant worker, delivery driver and pedicab operator in Brooklyn, N.Y., before moving here. "I saw a need and figured out the best way to fill it," he says of the Quickness RVA strategy. The company's delivering more than 200 orders a week so far.

Its list of restaurants includes Alamo BBQ, Fresca on Addison, Lamplighter Roasting Co., Little Mexico, Strange Matter and Nate's Taco Truck Stop. Customers place their orders with the restaurant by phone or online for delivery within a designated radius. The service is free (Alamo charges $1), but drivers depend on tips, which are usually 15 to 20 percent of the food total but can go higher, which offsets the occasional cheapskate.

Alamo BBQ added a new dish, the Texas Trainwreck, only on its delivery menu as a way to test the service's affect on business. The meat over mac and cheese is a hit, and Bucalo senses a growing opportunity with perks of its own, like staff meals and employee discounts on food. "We don't make the food but we want it to be good," he says. quicknessrva.com.

Farm stand open: Find seedlings to plant, vegetables to eat, and rain barrels to collect water for home gardens at the Tricycle Gardens farm stand, 2107 Jefferson Ave. in Church Hill, on Tuesdays and Thursdays from 4-6 p.m. Learn about urban gardening, community food activism and other local food topics through their programming and outreach. tricyclegardens.org.