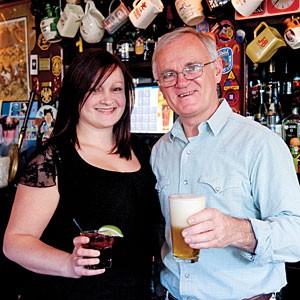 Some, including Capital Ale House, have been counting the days till St. Patrick's since early in the year. Others are a little more free-form in how they celebrate. But there's not a bar or restaurant in town that won't throw some sort of love at things green, potato or hoppy on March 17. Here are some starting points:

Rosie Connolly's Pub and Restaurant: Beloved bartender Tommy Goulding keeps this Shockoe Bottom spot among the city's friendliest. “Beer foam is why God gave us sleeves,” he says. Expect a full house for Guinness and dishes like steak and mushroom pie. 1548-A E. Main St. 343-1063.

McCormack's Irish Pub: Don't expect a beer brawl here, but a hearty crowd of regulars, tasteful food and excellence at the bar. If you're into amateur night, this isn't your spot. 12 N. 18th St. 648-1003.

Capital Ale House: Its extensive beer menu is so popular that four locations have are thriving. For St. Patty's, the band Enter the Haggis is likely to sell out at the downtown location's lively music hall at 9 p.m. Look for beer and menu specials at the other outposts. capitalalehouse.com.

Sine' Irish Pub & Restaurant: One of Shockoe Slip's busiest indoor-outdoor restaurants, this massive, wood- and potato-intensive setting is always slammed in March. (It's pronounced shin-AY.) Chef Patty McGuire and team put out an extensive list of Irish and American dishes, with corned beef and cabbage a sure thing, and entertainment matched by people watching. 1327 E. Cary St. 649-7767. sineirishpub.com.

Picasso Eats: More restaurants are getting on the bandwagon to celebrate the Virginia Museum of Fine Arts' monster exhibition of Picasso's personal collection, in town until mid-May. Look for specials on the menus at Amici Ristorante in Carytown, Bistro 27 downtown, Lemaire at the Jefferson Hotel and others hoping to draw out the festivities with deals on sustenance.

Come to supper: New to the North Side favorite Tastebuds American Bistro are Sunday dinner hours from 4:30-8 p.m. “We're winging it to see what the people want,” owner Andrew Wisniewski says. Chef Ryan Baldwin prepares three or four seasonal entrees, an extended small-plates menu and a family-style option, with $5 wines by the glass, and dinner for two served family-style for $26. 4019 MacArthur Ave. 261-6544. http://www.tastebudsamericanbistro.com.