When it comes to salami, salt meets earth at the Richmond-based Olli Salumeria. 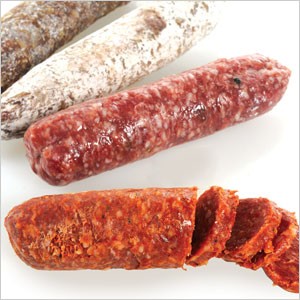 While Oliviero Colmignoli carves ribbons from the first Olli prosciutto — salted on Dec. 4, 2009, and “just pulled out of the rack yesterday” — he keeps his pride muted and his knife in gentle motion. This prosciutto melts into a silky tang that's almost effervescent; it's deemed a success worth waiting for, and Olli Salumeria has another selling point.

The local business is named for Colmignoli, a cap-wearing Italian with a young family and a fourth-generation calling. He and founder Chip Vosmik consider their Mechanicsville production space a test facility to be strategically outgrown. Imported equipment, high-tech parchment packaging and meticulously engraved red business cards show buyers these guys are tasteful, serious and ready to move artisanship to an industrial scale.

Olli's product line includes four styles of salami; the whole muscle meats — speck, coppa and lomo; the fats — pancetta, guanciale, lardo spalla and lardo; and now the prosciutto, cured in the traditional Parma manner, hand-tied and glistening. Vosmik says these meats “are right in the sweet spot of the American palate.” They're salty, rich and delicately chewy, with fat and flavor from aged, pasture-raised heritage pigs. “The first American habit is to cut off all the fat,” Vosmik says, “but it's clear white fat that smells and tastes wonderful, and people realize that quickly. It's like sushi-grade pork.”

So far, larger markets are most responsive to Olli's launch. At the Fancy Food Show in San Francisco last month, Vosmik says “it was three days of us not stopping once, of ‘How many do you want?'” In New York, some A-list chefs are tasting and buying, well aware of charcuterie's comeback and consumer desire for carefully made organic products.

“Salami in the United States is where California wine was in the '70s,” Vosmik says, meaning opportunity has arrived and the movement still has momentum. In Richmond, Olli cured meats are sold at Libbie Market, Belmont Butchery and Secco Wine Bar, as well as Feast in Charlottesville, the Inn at Little Washington and Palladio at Barboursville Vineyards — “anywhere our quality is appreciated,” Colmignoli says. http://www.ollisalumeria.com.

The Blue Goat: In case you missed it on styleweekly.com's Short Order blog, a new restaurant is in the works next to the Westhampton Theater. Chris Tsui and his Osaka group will open the Blue Goat at 5710 Grove Ave. later this year. Chef Kevin LaCivita (Pomegranate, Sushi-O) will oversee a European-influenced menu. “This is a very different concept for us,” says the group's  general manager, Ren Mefford, “and not fine dining. We're always trying to do something that sets us apart.” Tsui's design consciousness already is making its mark on the 1940s building, the largest yet for the group.

The White Anchovy: About to be finalized is a new venture for Todd Manley of Pescados. He'll take over the space left behind when the Trak family closed Seafire Grill near Short Pump. Look for a Mediterranean menu on the blackboard, a casual staff and a familiar chef as the deal comes together. “It's a nice time to be an independent guy in Richmond,” Manley says of the sweetheart deals going out to some of the city's busiest chefs and owners. They're getting calls from all kinds of landlords and developers, hoping new restaurants can draw business to their underperforming real estate. Watch this space for updates.