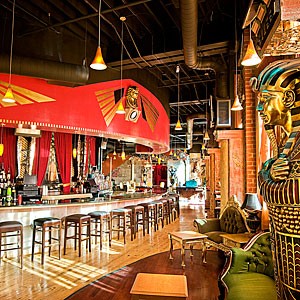 No matter what part of the city you live in, a new kitchen is cranking up nearby to tempt you away from that post-holiday fast. Here's what we're about to try in new Richmond restaurants:

Off the Hookah: Juggling bartenders, belly dancers, flamenco music and beds to lounge on — here's a new use for an old hat factory in a once-stodgy city. Easily the most decorative project in the works is this club in the Lady Byrd building on the Canal Walk. Situated at street level above the restaurant Current, this nightclub will attempt to give Richmond a link to Fort Lauderdale and West Palm Beach, where sister clubs wear the same Egyptian theme and sometimes have a celebrity in the crowd. Mediterranean food, a full sushi bar, lots of cocktails and two-dozen flavored smokes are the draws, or is it the beds and cabanas that are piquing interest? Dinner and bar nightly, coming soon to 140 Virginia St. offthehookahva.ning.com.

Pasture: Construction bids start soon for this project in the former Montaldo's building on East Grace. Co-owner Ry Marchant says the 100-seat restaurant, with chef Jason Alley's Southern regional recipes filling the small-plates menu, should be on track for a late-summer opening. New project manager Bill Chapman is carrying the renovation forward, Marchant says, and brings energy and expertise in historic renovation and restaurant planning. Look for a big bar next to big windows in a downtown block that deserves attention.

Cupertino's Bagels: Delays kept this downtown breakfast and lunch spot from opening in December as hoped. Look for an early 2011 entry in the bagel-sandwich field at 1215 E. Main St. It's owned by Walter Baietti of the West End's mother ship.

Conch Republic: Also under construction is this casual spot in Rocketts Landing, just south of the Boathouse restaurant and offering boat-up service and a Key West-themed, multilevel environment with decks, drinks and mid-priced eats. Owner Bob Cox says construction is nearly complete and an early April opening is the goal.

Enoteca Sogno: Fans have been waiting for the return of Gary York's wine bar, set to open at 1223 Bellevue Ave. in a renovated space that's larger, comfier and able to support an extended menu of Italian classics, well-chosen wines and an emphasis on neighborly affordability.

Hermitage Grill: After a fire last year, this longtime meat-centric spot is under construction with no word yet on an opening date.

TBD: Buttermilk Palace, as owner Kendra Feather has nicknamed her new project, comes to life by spring in the former Que Pasa restaurant. Feather's success (Ipanema Cafe and Garnett's) makes her a shoo-in for neighborhood devotion in the new spot, regardless of its official name.

Corner CafAc: Like so many projects, this one's taking its time to reopen. When it does, look for a shiny new kitchen, finally-clean windows and a general freshening, for a neighborhood hangout with familiar faces at the bar and daily specials on the menu.

TBD: Style Weekly architecture critic and senior contributing editor Edwin Slipek Jr. says a mystery project in the Fan will bring something new to local restaurant culture this year. Watch this space for the whos, whats and wheres of a couple of operations still being held close to the vest, but hoping to capture diners' interest.

Jaks Bagels & Deli:  About to open at 3443 W. Cary St. with daily breakfast and lunch sandwiches.

Parkside CafAc: It didn't open in 2010 and awaits its introduction to Woodland Heights next door to Crossroads Coffee & Ice Cream on Forest Hill Avenue. Advance interest in this chef-owned project is solid, and as usual, patience is required.

Crust & Cream: A former mechanic's shop in Westover Hills is almost through the construction phase and scheduled for a late-January opening. Owner Redwan “Rod” Saif says the place will be family-friendly, with takeout and delivery and about a dozen seats in the bright corner spot. A specialty will be Philly cheese steak sandwiches “with meat we cut, made to order while you watch,” Saif says. A foot-long Philly sub will cost $5.99. Other menu items will be soft-serve ice cream and frozen yogurt (coming in spring) and sandwiches, pizzas, chicken and seafood salads in the case, with a range of desserts. 4610 Forest Hill Ave. 230-5555.

Benny's BBQ: This Stratford Hills success story with a loyal following is about to move to larger quarters farther west. Benny's BBQ has a new home in Bon Air at the Stony Point Shopping Center in the former Belle Kuisine space.

Asian Galaxy: Japanese and Thai food are promised at this redesigned eatery, formerly a Planet Wings, at 7048 Forest Hill Ave. Construction is slow-going, as are details about the project.

Chicken Mania: Peruvian and Ecuadoran food, including rotisserie chicken and chopped salads, is about to be served in a totally redesigned building at 7524 Forest Hill Ave. Owners Patricia Castillo and Narcisa Garcia are completing installation of a 40-seat dining room for the counter service business, with lunch and dinner daily beginning in about a month. “It's fast and very moderately priced,” Castillo says, “and Latin American food that people don't usually get a chance to taste.” Look for Ecuadoran seviche with shrimp and Peruvian seviche with fish among other specialties.

Buz & Ned's: After a change in personnel, construction is back on track at the former Fuddrucker's near Broad and Parham. Buz Grossberg says he's fully committed to the project, and work is proceeding for a second location of his Boulevard barbecue landmark.

Plaza Azteca: This Tidewater-based small chain opens another location here in the Short Pump Shopping Center where cuisines now include Japanese, Italian, Spanish and American classic steakhouse, all within view of the Hilton Hotel.

Stella's: On a quiet block of Lafayette, famed chef Stella Dikos plans to open a new restaurant based on her summer travels to Greece with daughter Katrina Giavos of the restaurant dynasty. Dikos is known for her slow-simmered soups, luscious Med entrees and pastries, and food-of-love matriarchy. Her Facebook page must be something. Read more about this project next week in Short Order.