Candidate resigned as Virginia's secretary of the commonwealth last week. 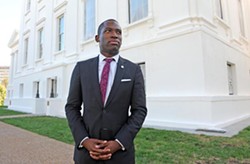 Levar Stoney has officially jumped into the fray in the race for mayor. Stoney is in the North Side near Brookland Park now, gathering petition signatures and knocking on doors. Stoney held off on the announcement until he resigned from his post as secretary of the commonwealth last week.

The political operative, who has managed a number of Democratic campaigns throughout Virginia, has the advantage of state networking and fundraising ties. One made an appearance today: His campaign press secretary, Matt Corridoni, who worked for the presidential campaign of former Maryland Gov. Martin O’Malley.

"I am running for mayor of Richmond because our city is on the rise, but we find ourselves at a crossroads,” he said in a statement from his campaign. “We cannot afford to have more of the same in City Hall. We need a new leader who will harness our momentum. We need a leader with new ideas, a new approach, and new energy -- for a new Richmond."