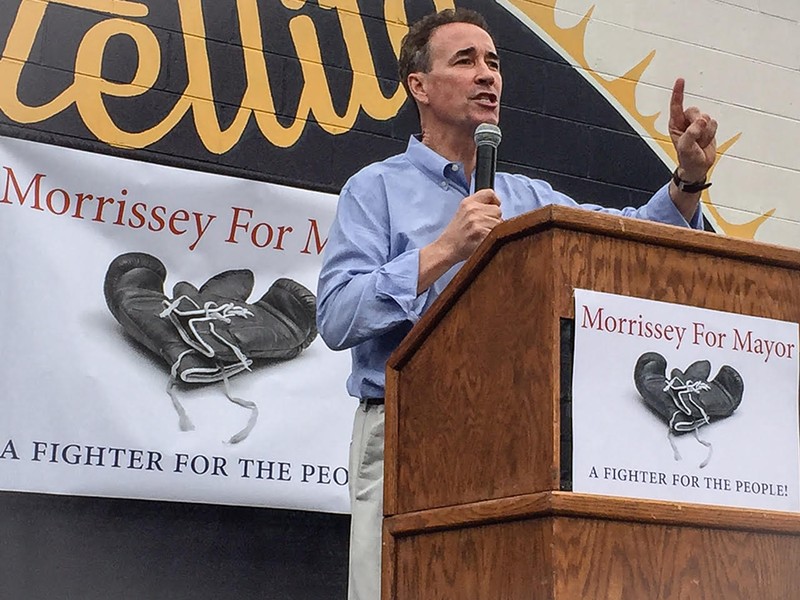 Scott Elmquist Joe Morrissey announces his plans to run for mayor before a crowd of South Side supporters.

After months of hinting, it’s official. Joe Morrissey is running for mayor

He made the announcement to a crowd of nearly 300 people earlier tonight at the Satellite Lounge in South Richmond. After he strutted on stage with the theme song from "Rocky Balboa" playing -- a call to his nickname, "Fighting Joe" -- he stressed a platform of providing basic services and improving schools.

“If you elect me your mayor," Morrissey said, "you will get a full time mayor who will fight for everyone in this city, every ward, all day long."

Speaking to recent furor over the city's delayed leaf collection and prevalent potholes, he pledged to stay on top of such items. He promised to overhaul Richmond’s public school buildings, such as those in the South Side where several schools are overcrowded because of recent jumps in population.

"My children are going to be educated in Richmond Public Schools," he said, "and I don't want any child in any zip code to put up with those conditions."

Morrissey, who often seemed to be speaking to a target audience, peppered his address with Spanish phrases for what he called his “Hispanic and black friends.”

Morrissey took a winding journey to this political point, which hasn’t been without scandal.

The 58-year-old was accused of having sex with his current fiancee Myrna Warren, 20, when she was a 17-year-old receptionist at his law firm. In December 2014, Morrissey entered an Alford plea in the case, denying guilt but acknowledging evidence against him. He received a six-month sentence that was reduced to a three-month work-release term. He served it while holding the 74th District seat in the House of Delegates, to which he was re-elected in January 2015.

Morrissey gave up the office to run for state Senate last year, but ended his campaign, citing health issues when his diaphragm stopped functioning twice.

"I've had my missteps, trials and tribulations," he said. "There's nothing secret about my background. You just have to read the front page of all of our newspapers."

Candidates must file by June 14, but former governor and mayor L. Douglas Wilder is holding a forum for candidates next week.