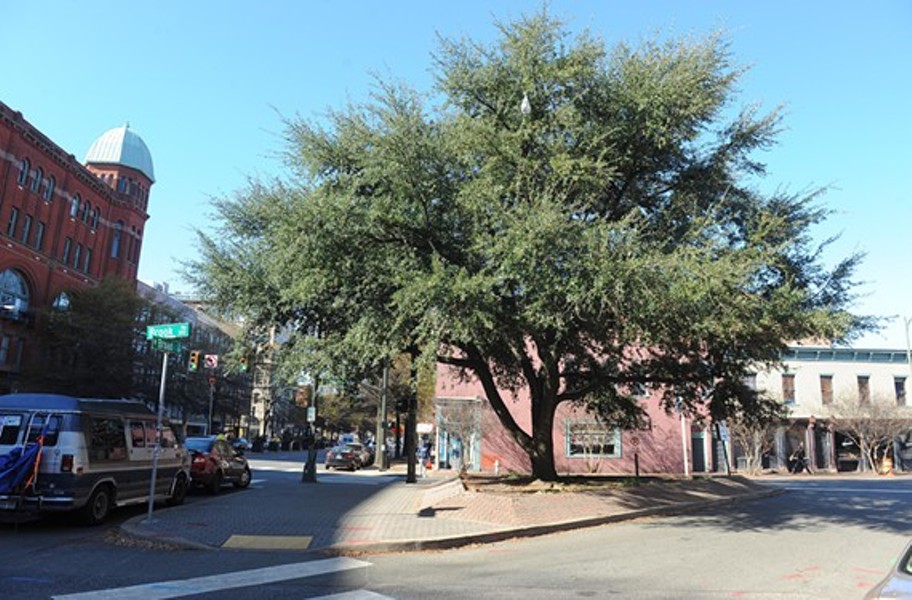 Scott Elmquist In Jackson Ward, questions remain about the fate of a towering Southern live oak, and whether it will be part of the Maggie Walker memorial.

The city seems to have changed its tune on sparing a tree that stands in a Jackson Ward intersection slated for the new Maggie Walker statue.

The life-sized statue of Walker is planned for the triangle where Adams and Broad streets intersect with Brook Road. It’s planned for completion next fall, with the surrounding area to become a plaza where viewers can interact with the memorial.

Designs aren't finalized, and city officials said a few weeks ago that they’re considering whether to remove the tree to make way for the changes or let it remain. The city’s director of planning and development review, Mark Olinger, said at the time that “the tree may go away given the constraints of the site.”

But during a planning commission meeting today, Olinger said that the tree may very well stay.

“We all believe that the oak and the memorial can coexist. I think that they are all compatible,” Olinger said. “I think that providing shade is something we would like to do in that dense urban environment.”

Olinger also noted that Mayor Dwight C. Jones was one of the signers of a petition in favor of saving the oak. The online “Woodman, Save That Tree” petition has more than 1,300 signatures.

The tree was part of a discussion that centered on a planning commission vote this evening to close vehicular traffic to the section of Brook Road that fronts the plaza. The street would be part of the plaza.

Commissioners considered the street closure as a separate item from the future of the tree. The vote in favor of closing the street was 5-4. Those against said that they wanted to see final design plans for the plaza before taking a vote.

But Olinger said that the city wanted to be sure that a street closure would be functional and would be approved before working on a design for the plaza.

If the road is closed, 6,400 square feet would be available for the plaza.

City Council is expected to consider the street closure Dec. 14, and the city plans to hold public hearings in January on a potential design. Then the commission will consider final approval on a design with the aim of having the statue in place by next fall.

More than a dozen speakers spoke on the future of the statue, plaza and tree. Many of them said the tree should stay, while Gary Flowers said that there wouldn’t be enough room for the tree and Walker in the plaza.

“Such a tree would diminish, and literally throw shade on Maggie Walker,” Flowers said.

Others spoke of the rarity of a Southern live oak in an urban environment.

Jennie Dotts, a local preservationist, spoke in favor of keeping the road open because of the unique architecture of buildings created to conform to the road’s diagonal line. She also said that because of Brook’s unique history as the city’s first toll road, the section should remain open.

Nicholas Smith of the Partnership for Smarter Growth spoke in favor of closing the road to help create a visually appealing space.