Joe Morrissey Sues to Get on Ballot

Says party officials violated his “fundamental right to participate in the political process.” 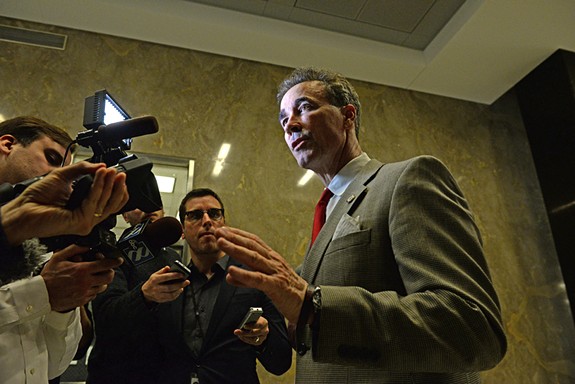 Embattled former delegate Joe Morrissey filed a lawsuit seeking to salvage his run for the state Senate on Monday. He’s asking a judge to force the Democratic Party to put him on the ballot, or at least prevent ballots from being printed until his case is heard.

Morrissey made headlines in January when he campaigned for and won a seat in the House of Delegates while serving a jail sentence.

His next political ambitions included the state Senate. He moved from his Henrico County house to a Church Hill apartment in the 16th Senate District last month to make a run for the seat formerly held by Henry Marsh, who retired last year and was replaced in a special election by former Petersburg delegate Roslyn Dance.

But Morrissey didn’t make the primary ballot after party officials certified only 222 of the 972 signatures he submitted with his filing. He needed 250.

Morrissey isn’t pleased. In his suit, he alleges violations of the First and 14th amendments of the U.S. Constitution, including his right to due process, political speech and right of association.

He alleges that the party “arbitrarily and capriciously rejected the signatures of Jane Doe and John Doe and other unnamed petitioners, each of whom signed a petition seeking to place Morrissey on the ballot as a candidate.”

In his lawsuit, Morrissey asserts that enough signatures were “wrongfully rejected” that, should they be restored, would qualify him for the ballot. He says the party “unreasonably rejected many of the signatures for non-material inconsistencies” with voter records, such as a different address.

Morrissey doesn’t name specific people he says were wrongfully disqualified, instead asserting that the John and Jane Doe named in his suit “represent one or more real persons [he] believes will be located.”

Morrissey says he’s gone through only 20 percent of his signatures, but already found seven qualified voters whose signatures were rejected.

He also alleges that multiple Democratic Party officials refused to accept the signatures for pre-approval, which he says is a common practice, and intentionally avoided him before the filing deadline.

“We have applied consistent, transparent standards to all of our potential candidates when they file,” Finklestein says.