Mayor Morrissey? His Move to Church Hill Hints at a Run 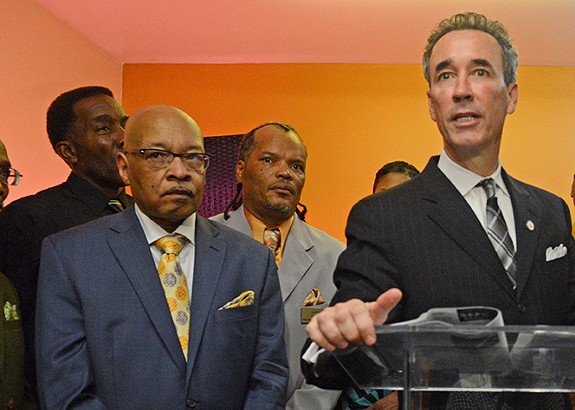 Joe Morrissey confirmed this weekend that he plans to leave the House of Delegates for a run at the state Senate. But his ambition doesn’t stop in the General Assembly. Several sources with knowledge of his long-term strategy say that in 2016, Morrissey plans to enter the race to be the next mayor of Richmond.

Morrissey made headlines in January when he campaigned for and won a seat in the House while he was an inmate at the Henrico County Jail. He served the entire session while living in jail, attending legislative sessions through a court-sanctioned work-release program. Morrissey pleaded guilty to a misdemeanor charge of contributing to the delinquency of a minor, but maintains his innocence.

Now out of jail, Morrissey declines to comment on his mayoral aspirations, but confirms his intention to enter the Democratic primary in the 16th Senate District. His seat, which includes parts of Richmond, Henrico and Charles City, doesn’t overlap with the Senate district, which is represented by Roslyn Dance of Petersburg.

Morrissey says he’s moved from his Henrico house to an apartment in Church Hill, which is in the Senate district. He says he’s in the market to buy a house and has looked at several properties in the neighborhood.

Petersburg Delegate Joe Preston also has announced his intention to run for the Senate seat, previously held by Richmond Sen. Henry Marsh. He left the legislature last year for an appointment to serve as a commissioner of the state Department of Alcoholic Beverage Control. Dance won a special election to fill the seat last year.

Morrissey has served as a Democrat, but ran as an independent in his most recent election. Democrats aren’t thrilled by his return to party politics.

“Joe Morrissey will do whatever it takes to further his own ambition,” says Morgan Finkelstein, a spokeswoman for the Democratic Party of Virginia. “I’m not shocked that he’d abandon his constituents to run for another office in another place. He has zero to do with our party or our values.”