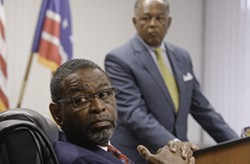 Lawyers for the city now say the departure of Richmond’s former chief administrative officer, Byron Marshall, was the result of an employment dispute.

The city and Marshall portrayed his departure as amicable when it was announced in September. But in a court hearing Thursday, the city argued that didn’t have to make public Marshall’s separation agreement because it pertained to an employment dispute, in which case it would be exempt under the state’s Freedom of Information Act.

Asked about the discrepancy between the city’s argument in court and what city officials told the public, Hall declined to elaborate, saying: “We said what we said.”

The court hearing concerned the city’s motion to throw out a lawsuit filed by former Richmond School Board member and blogger Carol A.O. Wolf.

Wolf, along with other residents and media organizations including Style, filed a FOIA request seeking the release of documents related to Marshall’s departure.

The city has refused to release most documents, citing exemptions in the statutes for certain personnel records and attorney client privilege.

Among the documents the city has declined to release is copy of the confidentiality agreement it forced City Council members to sign before briefing them on Marshall’s departure.

Judge Taylor took the city’s motion under advisement, saying she’d issue a ruling “within a week or two.” In the interim, she told the lawyers to set a date for a hearing on the full suit within the next two weeks.