A delegate’s day legislating from jail.

Last night Joe Morrissey won reelection to the House of Delegates while serving a six-month jail sentence for contributing to the delinquency of a minor. Today, the General Assembly convenes its 2015 session, and Morrissey has been granted work release, meaning he’ll spend his days at the Capitol and his nights at Henrico County Jail.


Joe Morrissey has left the building.

Morrissey has departed the General Assembly. He declined to say where he was headed.

”I’m going out -- that’s all,” Morrissey said, adding that he intended to return for Gov. Terry McAuliffe’s first State of the Commonwealth address at 7 p.m.

Morrissey exited the General Assembly Building and walked up Grace Street a block to St. Peter’s Catholic Church. He tried to enter but the doors were locked. He then walked into a nearby parking garage.

Morrissey spent the afternoon in his office, where he said he wrote thank-you notes to supporters, talked with his law partner, Paul Goldman, and went over legislation.

Toward the end of the day, Morrissey’s staffers unpacked boxes of files and personal effects that had been sitting on hand carts outside his new office. Among the items: Scooby-Doo, Sponge Bob, Bugs Bunny and Tweety Bird costumes he employed during a 2012 press conference taking aim at the so-called King’s Dominion law.

Henrico County Sheriff Mike Wade, who is overseeing Morrissey’s work release, said the delegate is due back in jail by 7 p.m., but will be allowed an extension tonight for the governor’s address.

”He’s not going out to any party’s or any socials or anything like that,” Wade, who’s office is tracking his whereabouts at all times via a GPS ankle bracelet, said. “But he’s got to be able to do his job in the General Assembly.”


Morrissey could lose his seat or, maybe just his special license plate?

It now sounds like some House leaders are leaning away from the possibility of seeking to remove Morrissey from the General Assembly. They say they’ll have a clearer idea of how they intend to proceed in the coming week.

“An expulsion hearing would be a really big distraction,” said House Minority Leader David Toscano. “He got the most votes -- he won. We can’t be distracted by Joe Morrissey and all that he’s doing.”

House Speaker William Howell said in a statement last night he is disappointed by Morrissey’s victory and he is exploring options “a number of options available to the body to address questions of conduct regarding its members.”

Howell’s office also said today not to expect any action on Morrissey today.

Toscano said the House’s options are only to expel, censure or do nothing. “And I don’t think anyone wants to do nothing,” Toscano said.

A censure could be as simple as the House passing a resolution condemning Morrissey’s conduct, Toscano said. Or the House could also vote to suspend some of his privileges -- for example by removing him from his committee assignments or even taking away his official House of Delegates state license plate.


Morrissey is done addressing reporters for the day.

Morrissey, who rarely shies away from media attention, seems to be growing weary of the barrage of cameras that have followed him today.

Reporters have been camped out in the lobby outside his office all morning and since this afternoon’s session went into recess at 1 p.m.

In a brusque exchange with a television reporter, Morrissey initially refused to answer questions, saying he’d been addressing reporters all morning and didn’t want to answer any questions he’d already fielded. The reporter protested, saying he hadn’t been a part of any of the prior interviews. Morrissey relented and brought the reporter into his office for an interview.

Morrissey also addressed his new secretary. “I apologize,” he said, throwing up his hands, “for all the drama.”


Morrissey has a history with his new seatmate. 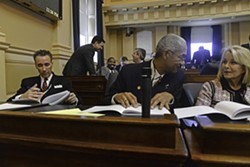 Joe Preston, a newly elected Democrat from Petersburg, is Morrissey’s new seatmate in the far corner of the House of Delegates where members without seniority sit.

Preston, a lawyer, also represented Morrissey in a civil suit over twenty years ago when a client Morrissey represented sued him, alleging fraud.

Preston says it was a “very, very long trial,” but that the jury returned its verdict in 11 minutes. They found for Morrissey, he says.

Preston talked briefly with Morrissey after today’s session went into recess for the afternoon. Otherwise, Morrissey’s fellow delegates seemed to avoid him. As one reporter put it, “nobody will talk to him.”

Does Preston have any misgivings about getting stuck sitting next to someone so politically radioactive?

“Obviously a lot of us feel the conduct is reprehensible,” Preston says. “He’s a sitting delegate that was just sit back here by his constituents and it’s not for me to judge him.”

Morrissey told reporters this morning that he expects “certain people” to take “certain actions.” But those actions aren’t likely to come today, according to multiple sources.

When they do, Morrissey says he’s ready:

I am going to take it each battle at a time. The most important thing though is that the voters of the 74th District spoke, and they spoke very clearly last night. And their vote, their decision, has to be honored. That’s why the founding fathers, Jefferson and Monroe, walked these halls for that principal -- that each vote counts.

Morrissey also hinted that he’s ready to move on from the House of Delgates, saying “I will finish serving this term in the House of Delegates and move on to other life doings and experiences.” But when reporters asked him to clarify, he insisted that he wasn’t saying this will be his last term. “I’m not saying anything,” he said.


Election results came in as Morrissey arrived at jail.

Morrissey says he’d returned to jail for the night but had not yet relinquished his cell phone when he found out he’d swept precincts in Charles City County, suggesting he’d won.

Shortly afterward, confirmation came from a news reporter who got permission to interview Morrissey in the facility last night.

Asked whether his fellow inmates cheered his win, Morrissey said he got the same reception in the cellblock he usually gets. He didn’t elaborate.

The 2015 legislative session has begun, with House Speaker William Howell delivering a few opening remarks. In another sign of Morrissey’s loss of status, the delegate has lost his old desk at the center of the floor of the House of Delegates and has been moved into the far right corner of the room.

Morrissey is still facing the threat of expulsion. House Minority Leader David Toscano, said lawmakers are still “having discussion about the appropriate consequences.”

Morrissey gets a lift.

Morrissey says that because of the icy weather, he was unable to get the doors of his Jaguar open when he released from jail this morning. But a Washington Post reporter was waiting for him outside the center and she offered him a ride to the Capitol. Morrissey called the reporter's presence "fortuitous." He didn’t respond when asked how he’d get back to jail tonight.

Minutes after Joe Morrissey arrived at the General Assembly Office Building this morning, House Clerk Paul Nardo gave him his oath of office in front of a crowd of reporters in his small, undecorated office.

Nardo said Morrissey opted to take the oath in his office rather than on the House floor.

“Is this normal protocol?” asked a reporter.

“Normal protocol is winning an election and getting sworn in,” Nardo replied.


Iced out and late for session.

Foul weather apparently has complicated Morrissey’s commute from Henrico County Jail East in New Kent County to the State Capitol. A Washington Post reporter posted a picture of his car covered in ice at 8 a.m., and as of this writing, he still hasn’t appeared. Session begins at 11:45 a.m., before which Morrissey presumably will be sworn in.

Morrissey's ice-encased blue Jaguar with House of Delegates plates is in parking lot at jail where he spends nights. pic.twitter.com/Faq1dEv6ZY

A small crowd of reporters is waiting for him in the lobby of the General Assembly building.

Because Morrissey lost all seniority in the House by resigning his seat, he’s been forced to vacate his comparatively nice office on the fourth floor, which offered a pleasant view of the Library of Virginia and City Hall, for a walk-in-closet-sized space on the seventh.

Democratic Delegate Kathleen Murphy got Morrissey’s old office. Democrats are distancing themselves from Morrissey, issuing a statement explicitly noting that while Morrissey has been affiliated with the party his entire career, he ran as an independent and is no longer a Democrat. A volunteer outside Murphy’s office says General Assembly staff painted and cleaned before the delegate moved in, but no further measures were taken to cleanse the room -- as in, no sage was burned.

Morrissey hasn’t had the chance to move in yet, and his office nickknacks, including a pair of pink boxing gloves, a nod to his “Fighting Joe” moniker, are sitting in carts in the hallway.