Fish Put City in a Pickle

A concern for sturgeon pushes Richmond’s dam walk completion to 2016. 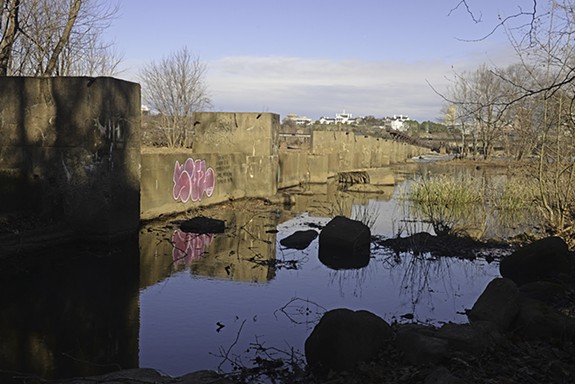 City leaders have been racing to get infrastructure improvements done in time for their host gig of the 2015 UCI Road World Championships in September. But increasingly, it seems less certain that much will be complete in time to show off to the hundreds of thousands of spectators expected to descend on the area.

The latest delay is the Tyler Potterfield Dam Walk, a pedestrian bridge that would connect Brown’s Island with the city’s South Side. Planners initially hoped to have it finished in time for the race, but city officials said this week that the project might not be completed until March 2016.

The culprits for the delay are sturgeon -- a rather large species of fish -- which have been making a comeback in the James River. In an effort to prevent disturbing their activity, the Army Corp of Engineers has restricted construction in the water, according to Tammy Hawley, a city spokeswoman.

Hawley referred further questions to the city’s planning director, Mark Olinger, who didn’t immediately respond to an email. Hawley said Olinger brought the issue to the city’s attention this week.

The dam walk is the second bicycle-pedestrian-oriented project to hit a setback this week. The city’s Urban Design Committee rejected a proposal Thursday to convert Floyd Avenue into a bike-walk street, another project city leaders hoped to complete in time for the race.

A third project, the installation of bike-share system, could be in place in time. But it will be tight, and the city’s bike-walk coordinator, Jakob Helmboldt, says he’s prioritizing a smooth installation of the system over a bike-race deadline.

In a subsequent email, Hawley says that while sturgeon are an issue, there are others, including another species of fish, shad, and the fact that the city has had trouble getting contractors to respond to their request for bids:

The sturgeon issue was just raised right before the holidays during a meeting that was part of the Section 106 and Army Corps review of the project. They advised city staff at that time that the sturgeon issue might have an impact.

The primary in-stream work issue, however, is shad time-of-year restrictions from DGIF, which DPR has known about for the past year. DPR had accounted for that in-stream work delay (restrictions exists from February 15 to June 30), but what has thrown the project off is the lack of response to the city's original RFP for work on this project.

Officials had said as recently as this December that they expected construction on the project to begin by the end of 2014.