McDonnell, His Future and the Kiss 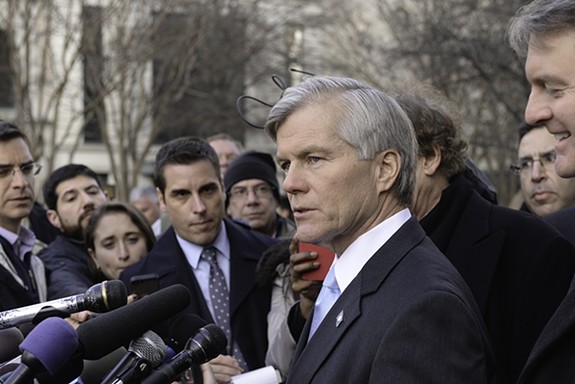 Bob McDonnell’s sentencing hearing turned into an exhaustive, repetitive eulogy for his political legacy. Supporter after supporter took to the witness stand to expound on the good he had accomplished in office and to mourn the end of what once was a promising career.

At the end of the five-hour hearing, Judge James R. Spencer sentenced McDonnell to two years in federal prison followed by two years of probation. McDonnell exited the courthouse, where he once again denied the charges against him and promised an appeal. Spencer told him to report to prison on Feb. 9.

Here are few takeaways and tidbits from Tuesday.


The kids aren’t all right: Spencer wasn’t impressed by the letters the McDonnell children wrote him blaming their mother for the scandal. He said that unlike many of the thoughtful letters he received, the ones casting blame elsewhere weren’t helpful to the family’s cause. In any case, he said, Maureen McDonnell may be the one who brought Jonnie Williams to the Executive Mansion, but her husband is the one who got him involved in the family’s business. Those who blame Maureen McDonnell are “dangerously delusional,” Spencer said.

Sentencing guidelines sentencing shmidelines: The prison sentence calculated by the federal probation department using statutory guidelines recommended that McDonnell be sentenced to between seven and eight years. Spencer said that would be “ridiculous” considering the facts of the case. At the same time, Spencer said, prison time was necessary: “This is a serious offense and all the grace and mercy I can muster can not cover it. … A meaningful sentence must be imposed.”

Jobs for Bob: McDonnell has more than one job opportunity lined up when he leaves prison, according to his lawyer, Hank Asbill, who mentioned one of them in the context of an exhaustive reading from letters of support the judge received. The offer came from Pat Robertson of Regent University, who says he’s offered McDonnell a teaching position in the school’s government department.

A former governor weighs in: Among the more surreal moments was former Gov. Doug Wilder's taking the stand as a character witness for McDonnell. Wilder was the only witness that prosecutor Michael Dry opted to cross-examine, asking whether the former governor would accept a Rolex like McDonnell. “No, I usually buy my own,” Wilder replied, prompting laughter. Wilder then drew applause when he questioned the propriety of basing the case on the testimony of Jonnie Williams, who received immunity in exchange for his participation in the state’s case.

Tense tender moments: Interactions between Bob and Maureen play out awkwardly. After Spencer handed down his sentence, the former governor hugged his daughters but breezed past Maureen. On his second pass, the two shared a long, pained look, and then Bob came in for a kiss on the cheek.