Joe Morrissey, in His Own Words 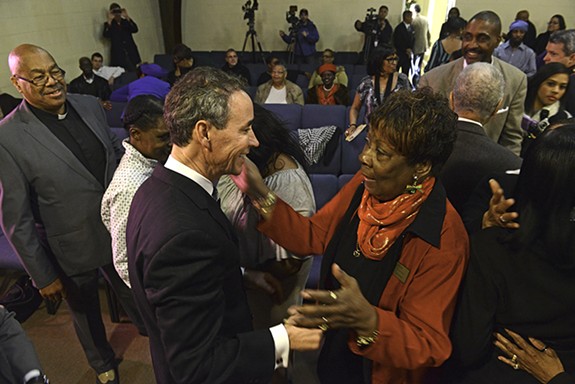 State Delegate Joe Morrissey is serving a six-month sentence in Henrico County Jail for a misdemeanor charge of contributing to the delinquency of a minor. Prosecutors alleged he had sex with a 17-year-old receptionist at his law office.

But because a judge granted him work release and he’s employed as a politician, he was able to leave jail to make a public appearance at a Highland Springs church in his district on Sunday. Here’s what he told the congregation and reporters.

Morrissey on why he attended church Sunday:

It's good to be back here at New Kingdom Christian Ministries. You know, it's a gorgeous morning. So was yesterday. I woke up in New Kent County at a facility called the Henrico County Jail East. And at about 4:20 I had breakfast, then I got on the road at 5:58 and I saw the sunrise and I was absolutely convinced that God is good. God is good.

Now, I got to my office at 6:25 - 6:30, and I had several messages. There was even a reporter there waiting. And several of those messages were from pastors and said 'Joe, why don't you come to church to speak.' One of those was Pastor Young, who invited me to come here.

I've actually been to New Kingdom so many times I think that pastor's put me on the tithing program. But he said, 'Just come and talk to the folks.' I said, 'Ok.'

Morrissey on why he didn't go to trial:

[My lawyers] said, Joe, this is not the best climate to go to trial with 12 strangers. You'll be in a position of saying, “I'm a lawyer, I'm a politician, trust me." The risk of trial was huge. I have a two-year old daughter, Kennedy -- the joy of my life. My lawyer said it's not worth the risk. My lawyer advised I enter into an Alford plea. That is a plea where you specifically say, I'm not guilty. But to avoid trial and a draconian sentence, I entered that Alford plea. At that time, my lawyers assured me that you'll still have your day in court in a civil trial.

Morrissey on the civil action he's promised to bring against his accusers:

Now, I read this morning that I wanted revenge. I don't want revenge at all. That was inappropriate. That should not have been the title. And I was very clear with the reporter: I just want my day to put on our evidence, to put on our tape recordings and let the public hear.

And so, I entered in that plea, which allowed me to go to work and defend people, and allowed me to do my business in the General Assembly. I thought that was the end of it.

Morrissey on his colleague's calls for his resignation:

So, when the caucus called on me to resign -- that may or may not be the correct thing to do. God makes that decision. And I have a big decision to make. It has to be made carefully. But that decision will be made with one thing in mind: What's best for the 80,000 residents that I represent, many of whom are in this district.

So I've tasked Mr. Goldman, my law partner and the former state party chairman, to research the state constitution and advise me what is in the best interest of the people in this district. Not my interest -- not the Democratic Caucus or the Republican Caucus, but the best interest of these people. And that decision will be made very, very shortly.

Morrissey on his time in the General Assembly:

Let me say two final things. In the seven years that I've been in the Virginia General Assembly, I have worked tirelessly. I have never missed a subcommittee meeting, a committee meeting, a vote -- save for when there were pressing personal concerns like a funeral. I have fought passionately for the underdog and I was there yesterday in the General Assembly. It's a nine story building, there were three people in that nine-story building. Myself, and three other constituents whom I met. I do that every Saturday.

The last thing I'm going to say, is that many of you know I spent time in Ireland. I taught law school, I got my masters in law, I read a lot. James Joyce was one of my favorite authors. But my favorite author -- pastor, and I think you might have read him too -- is Oscar Wilde. Oscar Wilde was known for his wit and his witticisms, and he said, and I've quoted this expression often, "the only difference between saints and sinners is that all saints have a past and all sinners have a future." I think I have a little bit of both.

Morrissey on the support of the congregation at New Kingdom Christian Ministries:

I will make my decision soon, very soon. I thank you for coming. I had no idea when I came in today that there would be anybody standing behind me. Complete surprise. But I thank you. I thank you from my heart. I want to wish everybody a merry Christmas. God bless you, and thank you once again for making me feel so welcome at New Kingdom Christian Ministries.