Dwight Jones Sitting at a Conference Table with Two Dogs 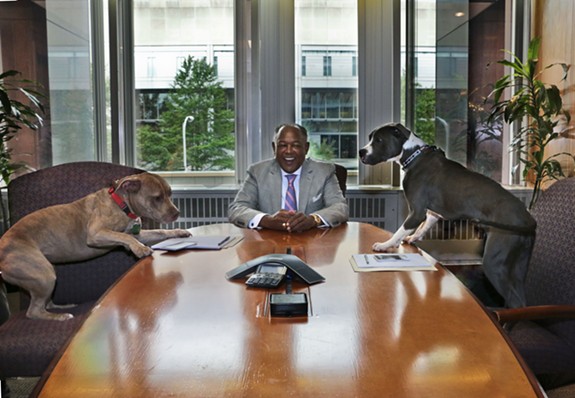 The city’s department of animal care and control put out a 2015 calendar to raise money for medical costs in its shelter.

The result is, among other things, a photo of Richmond Mayor Dwight Jones grinning while he sits at a conference table with two pit bulls.

“I believe there is something for everyone in this calendar,” Jones said in a statement. “I’m collecting a few that I will use as holiday gifts since being at a conference table with Pit Bulls is definitely a first for me. We joked during the shoot that the dogs were at City Hall to discuss the number of fire hydrants needed in the city.”

The calendar also features police, fire and other city officials, the statement says. The calendars are $10 and available at animal care and control’s offices at 1600 Chamberlayne Avenue, any city police precinct, Carytown Bicycle Company and the department of public utilities office at City Hall.