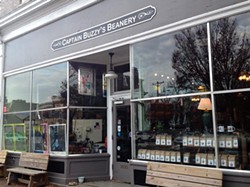 A judge dismissed a $3.5 million lawsuit that the owner of Captain Buzzy’s Beanery filed against neighborhood opponents of his plan to stay open an hour longer and serve beer and wine.

Bob Buffington’s lawsuit alleged that a handful of residents near his business “hijacked” the Church Hill Association and engaged in a conspiracy and defamation in opposing his application for a special-use permit from the city.

But he also says Buffington likely will sell his business to Church Hill Activities and Tutoring. The nonprofit won a $500,000 grant from the Robins Foundation last week to buy the shop and use it as “a community and entrepreneurial hub.”

The announcement originally sparked confusion because Fisher said Buffington hadn’t agreed to the sale. Now he says Buffington plans to “relocate the coffee shop to somewhere where his neighbors don’t hate him.”

The suit named John Whitworth, Kimberly Chen, Karen Jones and the Church Hill Association as defendants. Vijay K. Mago, a lawyer with LeClairRyan who represented Whitworth, Jones and the neighborhood association, said his clients are relieved by the judge’s dismissal, which came at a hearing Friday morning in Richmond Circuit Court.

“They think the judge did the right thing in dismissing the case,” says Mago of LeClairRyan.

The judge ruled that the defendants’ activities, which included the creation and broadcast of a campaign-style attack ad, constituted privileged petitioning activity under the First Amendment.