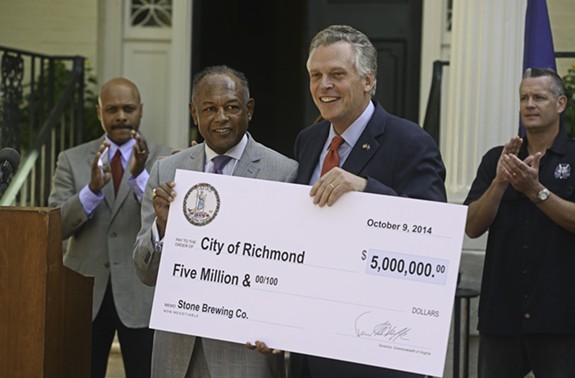 A handful of prominent restaurant owners say they oppose a proposal to invest $8 million in public funds to build a destination restaurant on behalf of Stone Brewing Co., which is locating a 200,000-square-foot brewery here.

“If they want to build a restaurant, let them finance and build it themselves just like all the rest of us have,” says Jerry Cable, who opened the Tobacco Co. in Shockoe Slip 37 years ago. “How can we compete with a company that has no money in the project?”

Cable and restaurant owners representing at least 10 other Richmond eateries plan to take their concerns to City Council on Monday, when council members are scheduled to vote on an ordinance authorizing $23 million in general obligation bonds to fund the first stage of the project.

Cable says he doesn’t necessarily oppose the brewery element of the plan, which calls for the city to build for $23 million. But he and other restaurant owners are galled by the prospect of the city’s financing an $8-million restaurant in a city where the dining market is beginning to feel crowded and there’s no shortage of private investment.

The city plans to build Stone a 30,000-square-foot restaurant on the banks of the James River at Richmond Intermediate Terminal off Warf Street. The property offers a commanding view of the river and the city skyline. The company says it will hire at least 200 employees and estimates it will bring in $10 million in retail and restaurant sales annually.

“We’re already in a saturated market,” says Johnny Giavos, who owns seven restaurants in the city, including Kuba Kuba, the Sidewalk Café, Stella’s and the Continental. “Now the city’s becoming a restaurant landlord. Since when does the city become a landlord to a restaurant? The last time we did that was 6th Street Marketplace. What happened there?”

Sixth Street Marketplace was the city’s failed bid in the ’80s to open a festival marketplace and food court downtown.

Josh Bufford, who co-owns Toast, Estilo, and Dash Kitchen and Carry with his wife, Jessica, cautions that revenue brought in by Stone’s new restaurant will be siphoned off from existing businesses. “My concern is pretty simple,” Bufford says. “I live in the city, and I own three businesses in the city. My property taxes and my business taxes should not be used for the city to decide to endorse someone to compete with me.”

Cable, Giavos and Bufford are also irked by the prospect of Stone receiving so much support while the city has done little to provide amenities for existing businesses.

“They kill us on the meals tax, they raised the water and sewer rates. Why don’t they do something to support existing businesses?” Cable asks. “Free parking, repair our streets, make them safe.”

The statement echoes sentiments expressed by the owners of Legend and Strangeways, though Cable says the brewery owners he’s spoken to share his concerns but are afraid to speak publicly. “They’ve decided to stay quiet,” he says.

City economic development officials have pitched Stone less as a competing restaurant and more as a tourist attraction. And they note that while the city is taking on financial risk by serving as the developer of the project, Stone is committing through lease agreements to cover all city bond payments connected to the development.

Stone officials have said that they wouldn’t have selected Richmond if the city hadn’t agreed to the arrangement. Whereas a private developer would have taken on the project with an eye to make a profit off the deal, the city is essentially acting as a not-for-profit developer, passing the savings along to Stone while still reaping benefits in the form of neighborhood revitalization, jobs and taxes. Those savings, Stone said, made Richmond a financially viable contender for the project whereas it otherwise wouldn’t be.

The restaurant owners stressed that like many Richmonders, they welcome Stone and want the company to locate here. They just question the economic incentives the city used to lure them here.

“Do I want Stone Brewing to come here? Absolutely,” Giavos says. “But why do we always have to foot the bill? Every time I turn around, it’s like the mayor wants to give something to someone for free.”