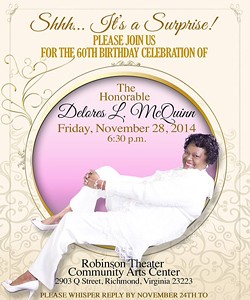 State Delegate Deloris McQuinn, who represents Richmond and Henrico, celebrated her 60th birthday this weekend with a surprise party, according to this invitation announcing the event.

The Richmond Symphony wants to buy a big tent so it can do outdoor concerts. [Richmond BizSense]

The state crime lab is no longer going to test gun shot residue, fiber, hair and other evidence in certain cases. [Times-Dispatch]

Someone stole a tractor in Chesterfield. The keys were in it. [Chesterfield Observer]

Candlelight vigils were held for the two men who shot each other on Decatur Street last week. [Times-Dispatch]

If you missed the state ABC store Black Friday special, don’t feel bad. Even with the discount, prices were still higher than in every other state on the East Coast. [Scrum]