Food initiatives, including an urban agriculture program, have stalled at City Hall. 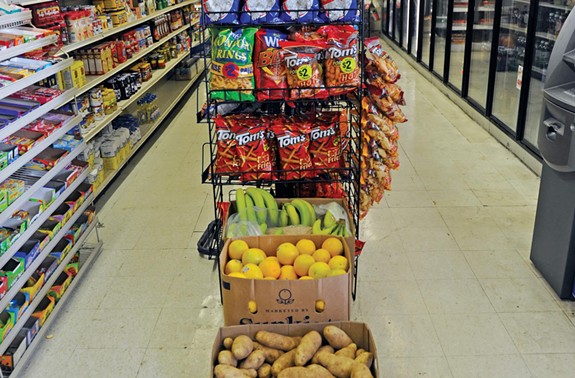 Gov. Terry McAuliffe may have been ramping up a major food policy initiative in Richmond last week, but a local program intended to improve access to food in Richmond neighborhoods has quietly stalled.

A crowd of suited government workers and politicians crammed into Little House Green Grocery on Thursday in Richmond’s North Side. It served as a backdrop for McAuliffe’s announcement that he’s convened a council to address food issues across the state.

Among other things, the council will be responsible for supporting local efforts, such as the one launched by Richmond Mayor Dwight Jones in 2011.

Jones’ initiative, a result of the Food Policy Task Force he convened, has been in limbo for five months.

Councilman Jon Baliles says the city is ready to move forward with a major urban agriculture initiative, but that the city’s been slow to sign a routine agreement with the Richmond Regional Planning District Commission, which would provide the staff to oversee the project.

Baliles says $20,000 has been available for the work since July, but the city didn’t respond to the regional commission until this month. There’s another $40,000 in the city budget set aside to fund water hookups for urban farms, which Baliles says will make it financially feasible for nonprofits to begin farming on unused city-owned lots.

In a letter to Jones administration officials, Robert Crum, the executive director of the commission, expressed challenged the city’s ultimate response, which he notes didn’t come until Nov. 10, despite the commission’s repeated prodding.

Crum says in his letter that the city altered the original work agreement, expanding its scope to a degree that was impractical and unreasonable. The city, for example, wanted the commission to develop a comprehensive master plan and apply for at least one grant per quarter.

Crum says his staff spent the prior year identifying suitable plots for urban agriculture projects and coordinating with nonprofits to run them.

Tammy Hawley, the mayor’s press secretary, said she was unable to comment, but might have more information this week.

Although the projects were conceived by the Food Policy Task Force convened by Jones, the funding came from a budget amendment sponsored by Baliles and Councilwoman Cynthia Newbille.

Baliles says he’s frustrated it’s taking so long to begin the work: “Richmond is where plans go to die or at least collect a lot of dust on the shelf.”